From the S&S archives: Oldest German feted at 107 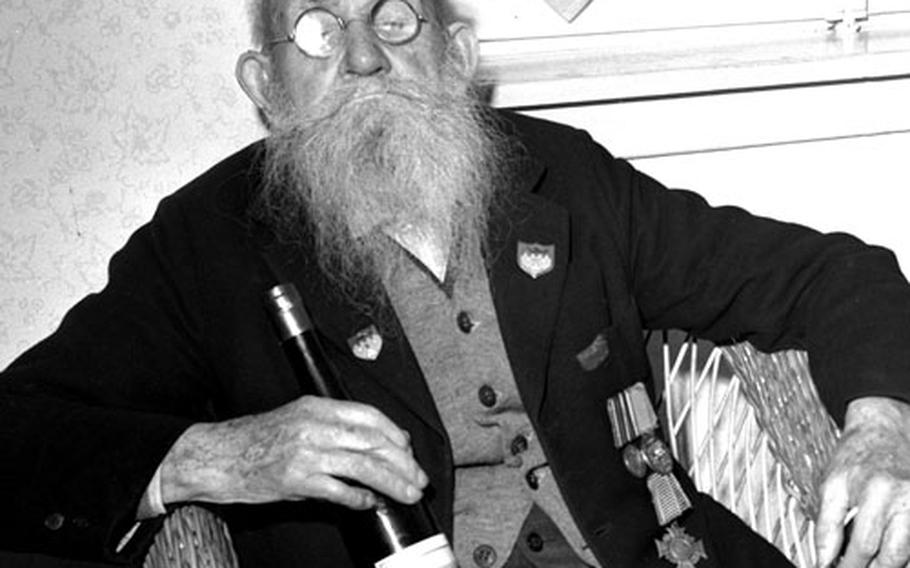 The sprightly Father Time, sans scythe and toga, attended a party at the local guest house and received the congratulations of most of the 1,300 residents of this Hessian village and government officials.

Even the U.S. Army was represented. The 4th Inf Div from nearby Gelnhausen sent its 12th Regt drum and bugle corps to serenade the bearded artilleryman who simply refuses to fade away. Gloeckner is a veteran of the Franco-Prussian war of 1870.

With his full gray beard vibrating with the music, songs and salutations, the old man accepted the numerous gift baskets bestowed upon him by the citizens, adjusted his horn-rimmed spectacles and steered his cane toward the fieldstone house where he has lived for the past 100 years on a street that bears his name.

In his own room he confided to a reporter and intimate friends: "These last four or five birthdays have been the most outstanding events in my life."

He fingered a birthday greeting from President Theodor Heuss of the West German Federal Republic and tossed it on a growing pile of similar greetings.

"My grandson Johann tells me what they say. Pity I cannot read them. Even the Bible print is getting too small for me to read," he said.

Gloeckner pointed to the wine bottles that festooned his tiny table. "Dry and white &#8212; from the Moselle," he said. "That other stuff is sugar water."

The frail patriarch was born in the town mill in 1845. Jobs were scarce in those days. But in 1867 he went to work on the new railroad between Frankfurt and Bebra, and just about the time he felt fortune had begun to beam upon him he suffered a bitter stroke of irony &#8212; he was drafted. He couldn&#39;t afford the stage-coach fare to Kassel. His railroad wasn&#39;t completed. He walked 100 miles to report to his draft board.

When he returned from the wars in 1872 he was hired as coachman for the Hotel Adler at Hanau.

His clue to longevity is as pure as Hessian spring water. "Do as God wills. Never question," he says.

Gloeckner buried his wife Katerina in 1907. Their only son, if alive today, would be 69. His grandson Johann, 46, stokes his fire and tends his wants.

When the parade of guests diminished and the cigar grew short he became a little restless from all of the excitement. Voices belonging to all of the handshakers said: "We will see you again next year." The old man adjusted his Prussian medals and replied; "If God wills it."