From the S&S archives: No pampered stars Anthony Quinn on the set of (later released as ) in Spain in 1965. (Bob Milnes / ©Stars and Stripes) 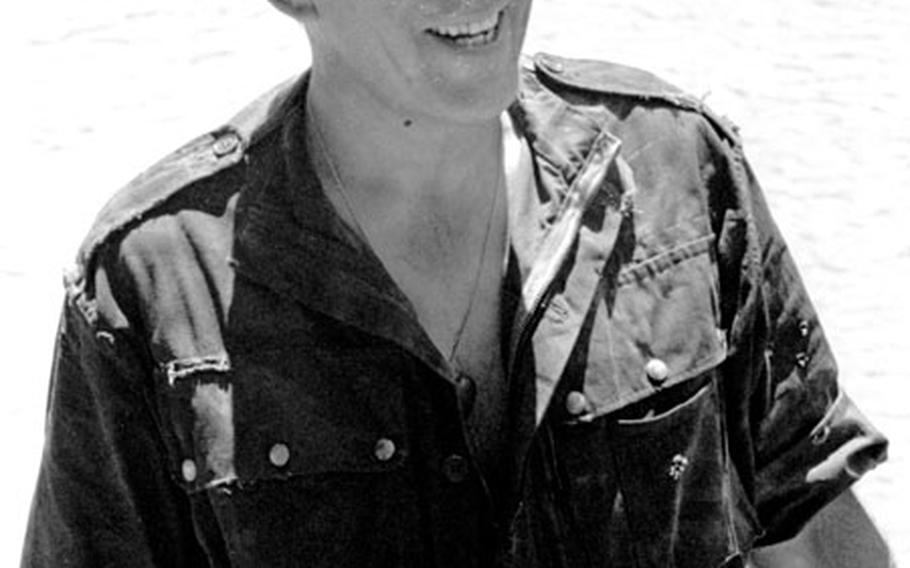 Alain Delon brought some experience into his role as a paraqtrooper, having served in the French army for five years. (Bob Milnes / ©Stars and Stripes) Director Mark Robson gets a lift to shore from a camera platform. (Bob Milnes / ©Stars and Stripes)

THE OLD PORTRAIT of the Hollywood director wearing a beret and jodhpurs while ordering his minions about with a riding crop is being replaced these days by a man wearing blue jeans scrambling up mountains and wading through swamps.

One of the famous Cecil B. DeMille stories was that he could sit down at any time without looking back &#8212; the chair just had to be there.

Today such pampering is a thing of the past as the directors search for realistic locations far, far away from the mink-lined swimming pools.

One man who never hesitates to march his cast and crew into rough locations is Mark Robson, currently filming "The Centurions" in Spain.

Stars such as Anthony Quinn, Alain Delon, Claudia Cardinale and George Segal are finding themselves working in mountains where the trails are too steep for a burro, on burning sand where their feet must be taped and in sweltering jungles where no makeup is needed for sweat-streaked faces.

"The days are gone when you could fool the audience with papier-mache mountains and swamps made by sticking a little bamboo into a swimming pool on the back lot at Metro," Robson explained. "I like to make action pictures, and you can&#39;t make good ones without honest locations."

To find what he wanted, Robson spent months exploring. For example,. when he wanted a dungeon, he found a perfect one under an old military barracks in the center of Madrid just across a wall from the luxurious town palace owned by the Duchess of Alba. "I smelled it out," he explained. "It was an old horse stable and the memory lingers on."

"The Centurions" is based on a novel by Jean Laturguy, sometimes called the Hemingway of France. It concerns a group of French paratroopers sent to Algeria during the bloody uprising that led to independence.

Unlike many directors who feel war pictures should be filmed in black and white for realism, Robson insists on color. "Things have color in true life, so how could black and white be more realistic? This is just an argument used to justify saving the money."

No price tag has been put on the picture that is being made by Robson&#39;s own company, Red Lion, for Columbia release, but it will certainly run into the millions. Along with the expensive cast, the picture is being filmed almost entirely on locations in Spain where weather and other problems arise all the time.

"The picture begins with the paratroopers being defeated at the final siege of Dien Bien Phu," Robson explained. "We have recreated the entire fortress area near Almeria just for this one sequence."

After the defeat, the paratroopers, headed by Avian, are forced to march to a prison camp in Indochina. This was filmed under the burning sun near Malaga along a muddy river where the mosquitoes are every bit as hungry as any found in Indochina.

DELON found the setting particularly realistic. Before he ever dreamed of becoming a movie star, he joined the French army and spent most of his five years serving with the men now being portrayed for the movie. "I don&#39;t even like to think about it now," he confessed.

The handsome Frenchman plays the officer who falls in love with Claudia Cardinale before he learns she is smuggling bombs and such for the Algerians, led by her brother, George Segal.

"We have a love scene on the beach after we run out of the water. They had to put tape under our feet because the sand was so hot, but I can tell you it is difficult to look tenderly at a girl. when you are getting a hotfoot at the same time," Delon said.

Quinn, fresh from his robust role of "Zorba the Greek," takes all the physical punishment in stride. When taken up on the rugged mountain location where the climactic battle is staged, Quinn took off for even higher peaks and returned four hours later with his clothing badly torn.

"We didn&#39;t know what had happened to him and we were getting worried, although Tony isn&#39;t the type of guy you worry about," Robson explained.

Robson, with credits such as "Champion" and "Home of the Brave" behind his name, finds that stars seldom complain about the physical discomforts of picture making. "The problem is that the performance suffers when conditions get too rough," he explained.

Another Robson war picture, "Von Ryan&#39;s Express," was recently released, and the critics are saying it is the best thing Frank Sinatra has done since "From Here to Eternity."

"War pictures offer the best opportunity to show people experiencing the most dramatic moments in life. You don&#39;t have to add artificial elements just to make them entertaining," Robson said.