From the S&S archives: Navy Seals slip out of sticky spots in Vietnam 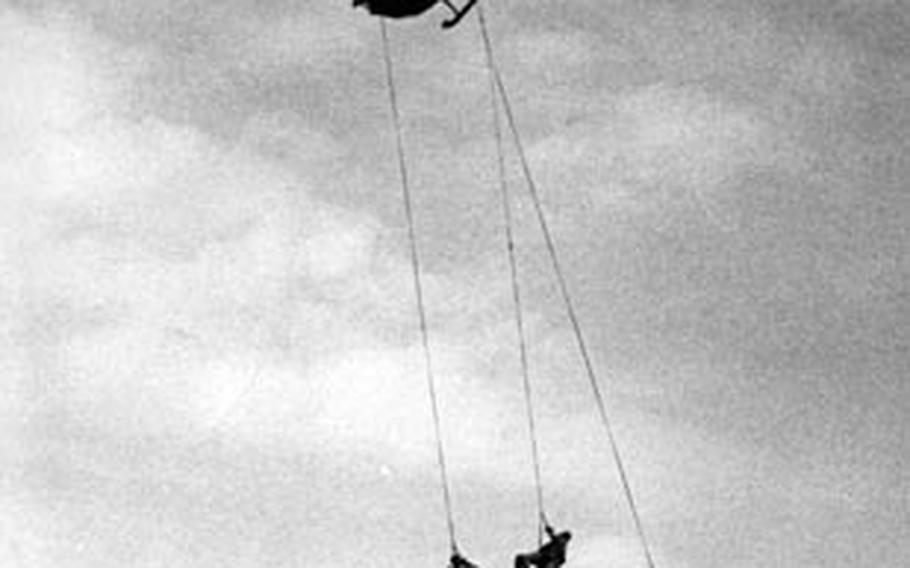 Three U.S. Navy SEALs dangle from helicopter winches after a running takeoff from a Vietnamese beach during a fast-getaway demonstration in 1967. (Ray Belford / ©S&S)

AT A SEAL BASE, Somewhere in Vietnam &#8212; The Navy Seals are a slippery bunch of characters who live up to their name by pulling off operations that are really hairy.

More than 100 of these daring specialists are assigned to Seal Team One in "the Pacific area of operations," according to their spokesman, but the exact number, like their operations, is strictly hush-hush.

The name comes from sea, land and air &#8212; the areas where they operate. Each man is a combination frogman, paratrooper and commando. They are also required to know at least one foreign language.

Despite their rugged training, the Seals are sent out with orders to avoid contact with the enemy.

Dressed in camouflaged fatigues, with their faces painted green and black, they usually go out in small groups aboard a landing craft. Once put ashore, they are on their own in enemy territory.

Their basic job is intelligence &#8212; operating listening posts and grabbing off a prisoner for questioning whenever possible.

If they do get in trouble, the men can call on their training in the most lethal types of hand-to-hand combat. Surprisingly, considering the nature of their work, the casualties have been light.

The Seals have been compared to the Special Forces of the Army and the Commandos of the Air Force, but they take pride in knowing that no other military units are prepared to take on some of the jobs they handle.

The full story of the Seals will not be told for some time to come, but when it is told, the books are certain to make fascinating reading.