From the S&S archives: Moore demands 100 Gs to sign for Anthony defense 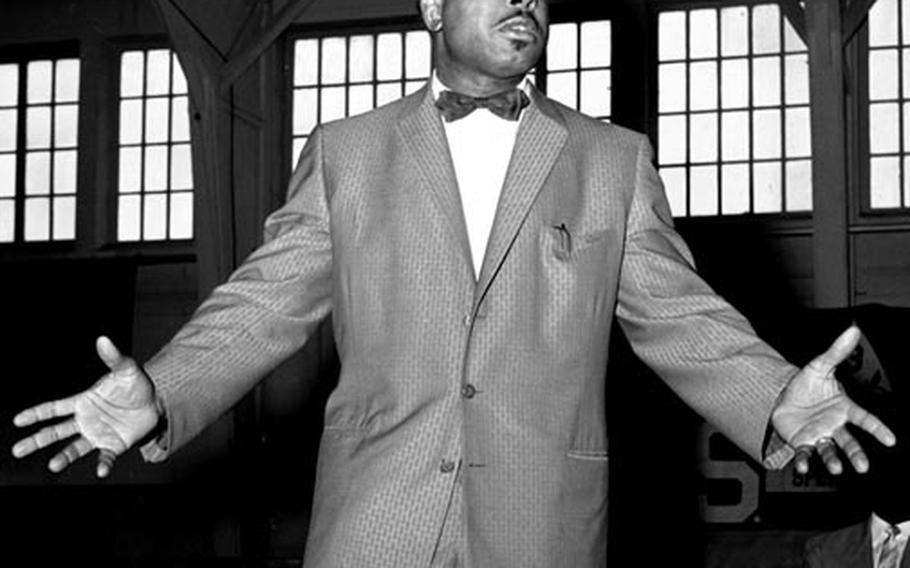 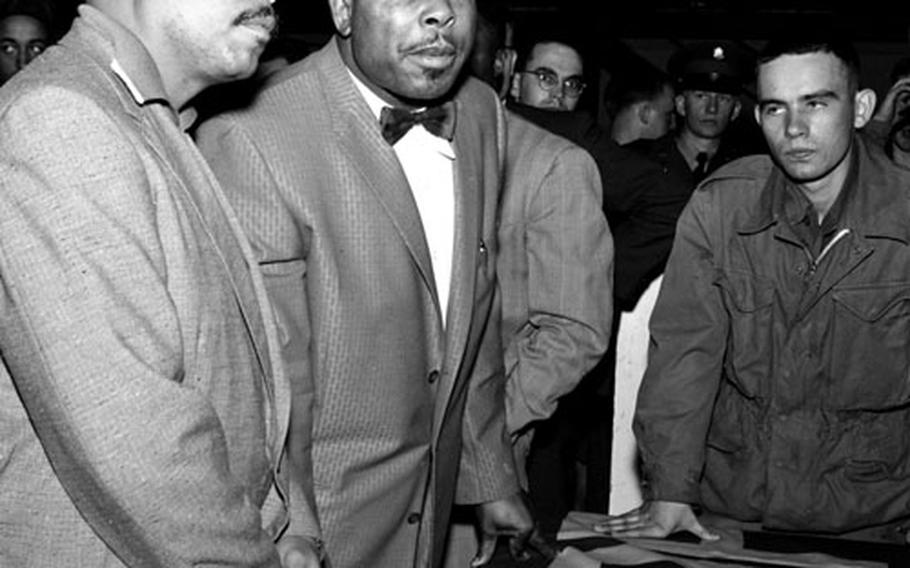 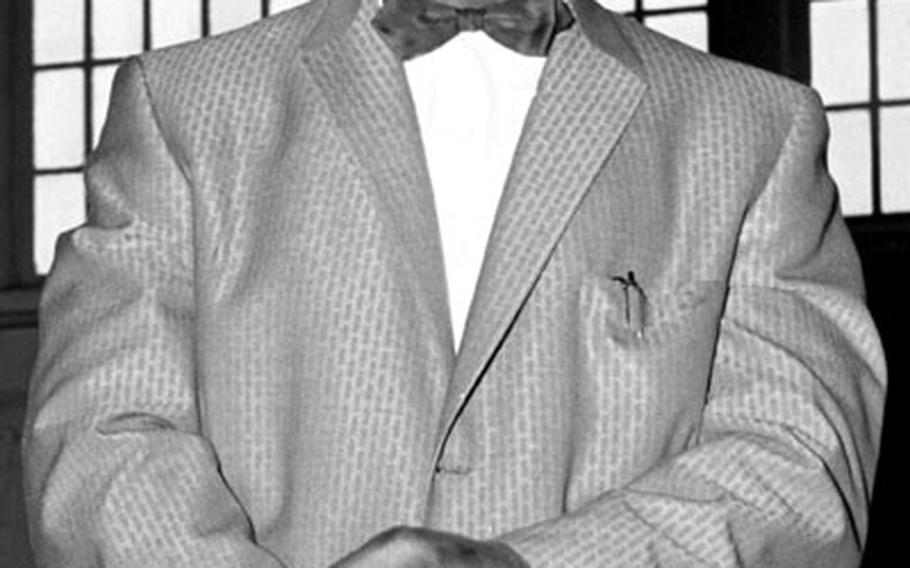 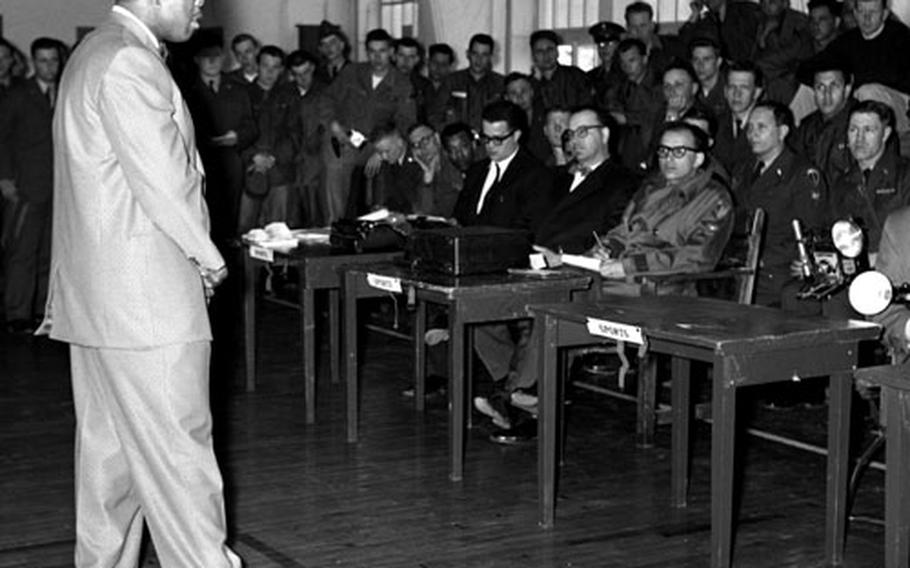 Archie Moore talks to troops and reporters at Drake Casern in Frankfurt in May, 1957. (Merle Hunter / ©S&S)

FRANKFURT &#8212; Heavyweight champion Archie Moore, whose potent fists have stopped 115 opponents during an illustrious ring career dating back to 1936, pulled no punches Monday afternoon when he indicated the National Boxing Association and International Boxing Club were putting him in a vise and he just didn&#39;t feel like being squeezed.

Speaking before a gathering of some 60 newsmen and GIs in the Drake Casern gym at an informal press conference hosted by the 3d Armd Div, the 175-pound class monarch outspokenly denounced the IBC, NBA and even took a few verbal jabs at his own manager, Charley Johnston.

Moore was accompanied by his trainer Lucky Thompson, one of the world&#39;s foremost saxophonists, and his second cousin, Sgt Jimmy Moore, a member of the 3d Armd Div&#39;s CCB.

Moore, handsomely attired in a brown suit and bowtie and sporting a trim mustache and undersized goatee, insisted he would not defend his title against New York challenger Tony Anthony unless his demands for a $100,000 guarantee are met.

Anthony earned the right to face the 40-year-old Moore by knocking out Chuck Speiser in the third round of their scheduled 12-round elimination bout in Detroit April 5.

Archie said he is all too willing to meet Anthony if "my monetary demands are met."

He revealed that he recently received a telegram from Floyd Stevens, president of the NBA, informing him that it he did not fight Anthony on June 7 in Detroit he would be suspended "and the title would be declared vacant one month later on July 7."

According to Archie, the IBC requested him to come to New York by March 18 to sign a contract, stipulating he would defend against the Anthony-Speiser winner.

Moore maintained that he never signed a "valid contract with the IBC to fight Anthony on June 7."

"I arrived two weeks early and stayed in New York at my own expense &#8212; and it was expensive," Moore said. "I was then informed Jim Norris (the IBC president) was unavailable and that I should go to Detroit to sign."

Archie said he went to the Motor City and a conference was set up in the office of promoter Nick London just a week prior to the Anthony-Speiser go in that city.

But it was not a valid contract, Moore insisted, merely a document of "good faith." He said the financial aspects were not covered "and I was the only one to sign &#8212; neither Speiser nor Anthony nor their representatives were present at the signing."

The broad-shouldered champ steadfastly proclaimed that he "just went through the motions for the benefit of the reporters and newsreelmen who sat around drinking and eating."

"I certainly don&#39;t think my demands are unreasonable," Archie stated. "I waited 16 years for a shot at the title and for four years and 11 months of that time was the No. 1 contender in the national ratings.

"Now do you think it is unreasonable for me to demand $100,000 against a 40 per cent guarantee to risk what is mine against a 22-year-old who has been fighting for only four or five years?

"The public should know about this," Moore charged. Then addressing the press section. he pleaded for the reporters to "convey this message so the fans can hear my side of the story."

He also lashed out bitterly at Johnston, who remained in New York while Moore came on his present junket.

"Johnston hangs on my coattails and gets his regular percentage of all my winnings," Archie said. "Now you&#39;d think he&#39;d be shouting my case from the rooftops but all he&#39;s doing is keeping his mouth shut. If anybody should be suspended it should be Johnston."

He went on to say that Johnston, his seventh manager during his 21-year career, told him he (Johnston) was unable to get any fights in Germany for Archie.

"But two days after my arrival I had a contract to fight Hans Kalbfell," Moore stated. The champ decisioned the German in a 10-rounder in Essen May 1 in what he termed a "tuneup."

Archie said his current agent, Baron von Stumme, himself a leading fight manager, has almost concluded negotiations for a May 25 fight in Stuttgart against a yet undecided opponent. In all probability his foe will be a non-German.

Prior to the introduction of the controversial issue, Moore covered many ring subjects, diplomatically parrying the few queries he did not wish to discuss.

He said a fight with middleweight king Sugar Ray Robinson would be a natural to "draw the biggest gate in boxing history."

He refused to choose between Rocky Marciano and Floyd Patterson (his conquerors by knockouts in his two quests for the heavyweight diadem) other than to state that his fight with Rocky was the harder. He termed Marciano the more rugged but called Patterson cleverer and faster.

Moore admitted to being 22 pounds over the 175-pound light-heavyweight limit but insisted that hard work and a diet he obtained from an aborigine in Australia in 1940 always enabled him to pare off poundage rapidly without endangering his health or fighting trimness. He said he will soon publish the secret of his diet.