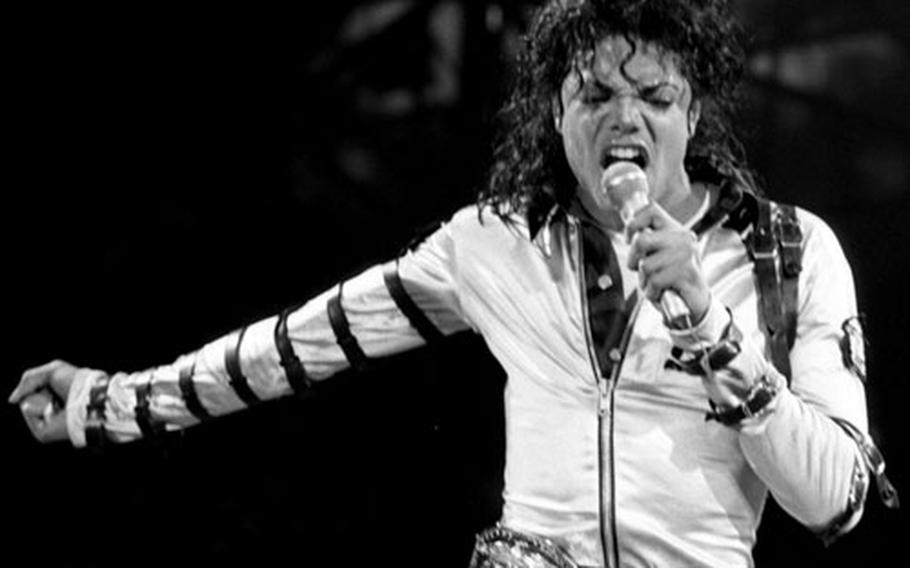 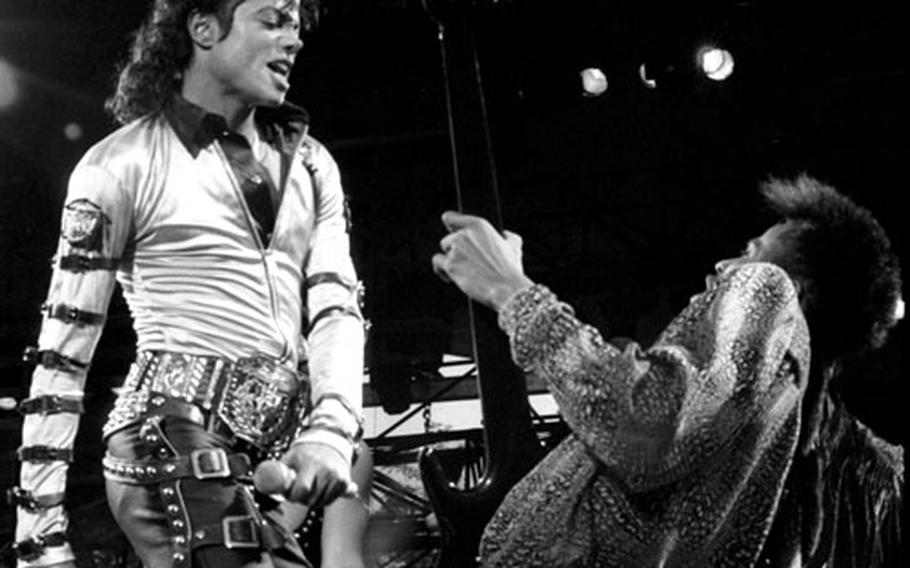 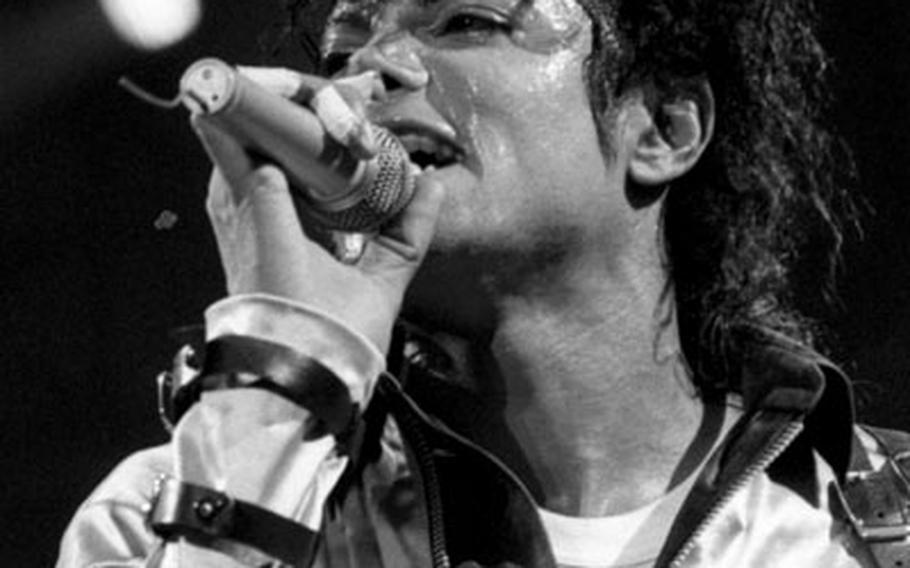 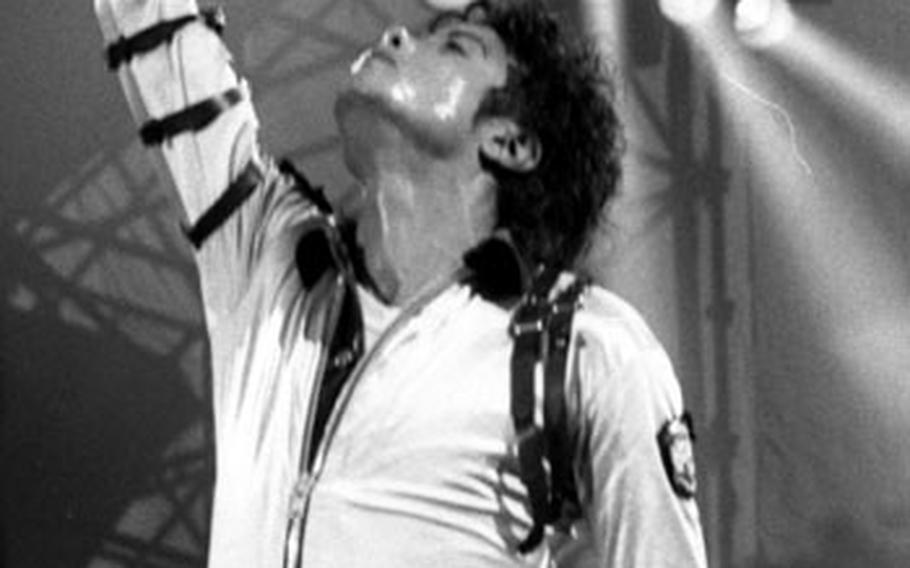 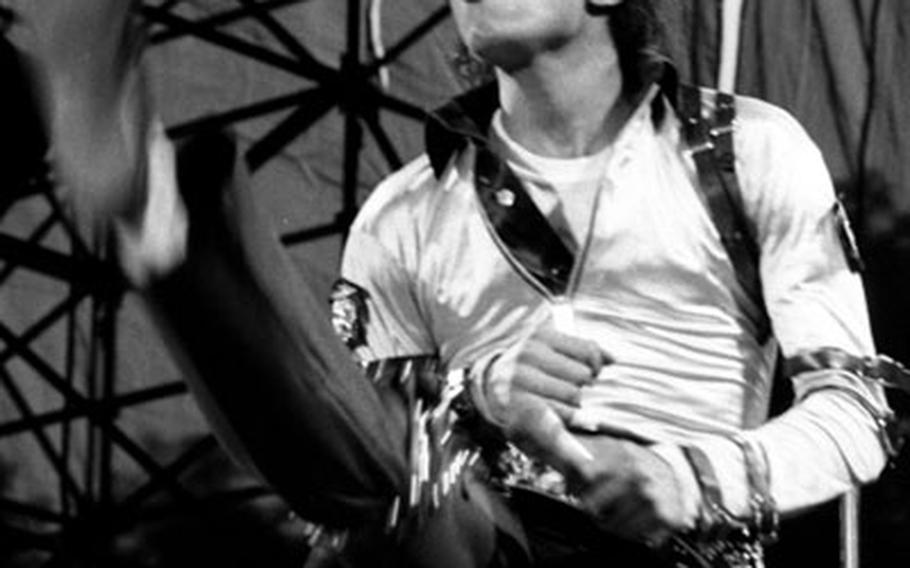 HE WAS BARELY a speck in the distance, but what an exciting speck he was. Michael Jackson danced, pranced, moonwalked across stage, kicked his legs high, gyrated and spun in a mesmerizing two-hour, performance in Basel, Switzerland, last week, causing near mass hysteria among the more than 55,000 fans packed into the city&#39;s football stadium.

Forgotten were the tales of Jackson&#39;s facial operations and hormone injections, his assorted idiocies and idiosyncrasies. If the superstar comes across as a wimp and a wussy off stage, on stage he works hard for his money (in estimated $1 million per show).

If he says he&#39;s a shy pussycat in private, in concert he&#39;s a ferocious tiger bursting with unrestrained energy. Even his voice, a timid squeak in rare public pronouncements, is strong and confident when he tells the crowd "I love you - ich liebe euch" over and over at the end of the show.

Jackson&#39;s music, too &#8212; those bright, catchy, all-too-familiar little pop tunes heard over the radio &#8212; receives an unexpected, yet thrilling, hard-rock edge in concert. Metal riffs, blasted out by a leather-and-studs clad, bleached-blond lead guitarist, tear through the songs with a ferocity that would rival the best of the current crop of metal axemen. If Jackson were ever to release a live album, his music would surely appeal to hard-rock fans.

European promoters have been billing the Jackson tour as "the event of the century." For once the hype is true. Spectacular lights and pyrotechnical effects, amazing choreography, superb musicians, Jackson&#39;s multiple costume changes and mind-boggling magic tricks, courtesy of Las Vegas&#39; Siegfried & Roy, all add up to one heck of an event. In Basel, even the weather played a magical part when a sudden flash of lightning flitted across the darkened sky. (Or was that just a trick too?)

Highlight of the show? Virtually each song is a highlight, each minute of the concert offers some special effect or fancy footwork. All eyes seem irresistibly transfixed upon the giant video screens that show sometimes daring closeups of Michael Jackson on the move.

In Thriller, the title track of his 1982 multi-platinum release (the biggest selling album in music history), Jackson appears on stage as a teen werewolf, complete with mask, and rages about like a mad beast before disappearing into a white Bedouin tent. Then &#8212; a big bang, and Jackson magically appears swinging Tarzan-like on a rope on the other side of the stage.

Another split-second disappearing act comes during Beat It, Jackson&#39;s 1983 smash single. A silver shroud falls from the ceiling and hides the singer from view. A bang &#8212; and Jackson appears atop a mechanical arm that slowly swings forward over the crowd.

In Heartbreak Hotel, a single Jackson released with The Jacksons in 1980, he is seen in silhouette dancing behind a screen. When the screen lifts, he and four dancers frolic about stage in Mad Max getup. Man in the Mirror, from Jackson&#39;s current Bad LP, reveals a double image of the star on the video screen. (Jackson had sense enough not to show the pseudo-political video to the song, described by the New York Times as "the most offensive video clip ever" for showing news footage of homeless people, starving children, aerial warfare and similar scenes, all for the sake of selling an album.)

In Billie Jean Jackson displays his true dancing talent. Fascinating closeups on the video screen show the singer doing his famous backward gliding moonwalk and dancing about on his toes without the help of toe shoes. And, yes, it is during this song that he wears his famous white glove.

Jackson doesn&#39;t mind sharing the spotlight, either. In Beat It and Dirty Diana he engages in a guitar-voice battle with the lead guitarist. A funky instrumental tune features bass, drum, keyboard and synthesized guitar solos.

For sheer entertainment, Jackson&#39;s show gives the fans their money&#39;s worth. Let him have all the eccentricities he wants to off stage, as long as he keeps up his exciting on-stage performance &#8212; and maybe comes around a little more often. This reporter, for one, certainly has a new-found respect for Michael Jackson as a singer, dancer, entertainer and all-around showman.

The only criticism is that it all went way too fast.