From the S&S archives: Mets eager to play ball 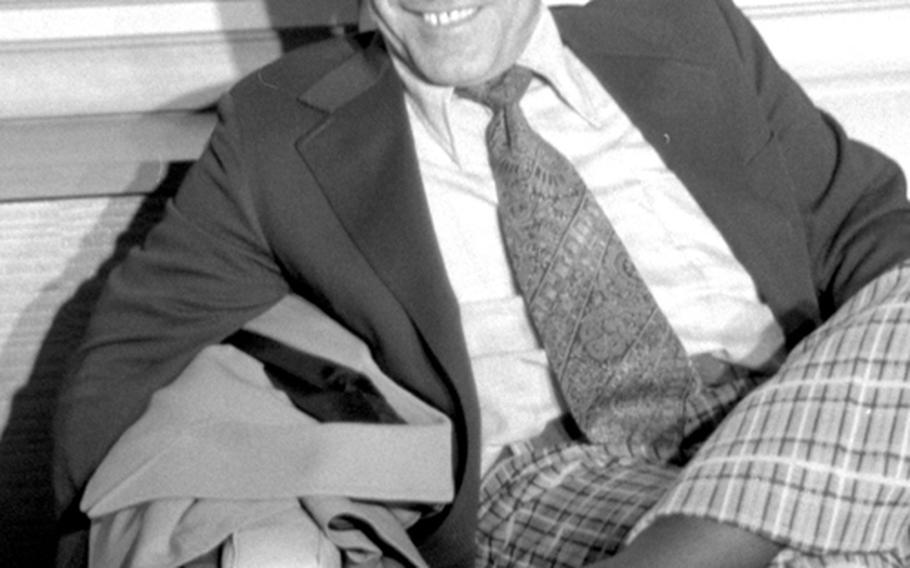 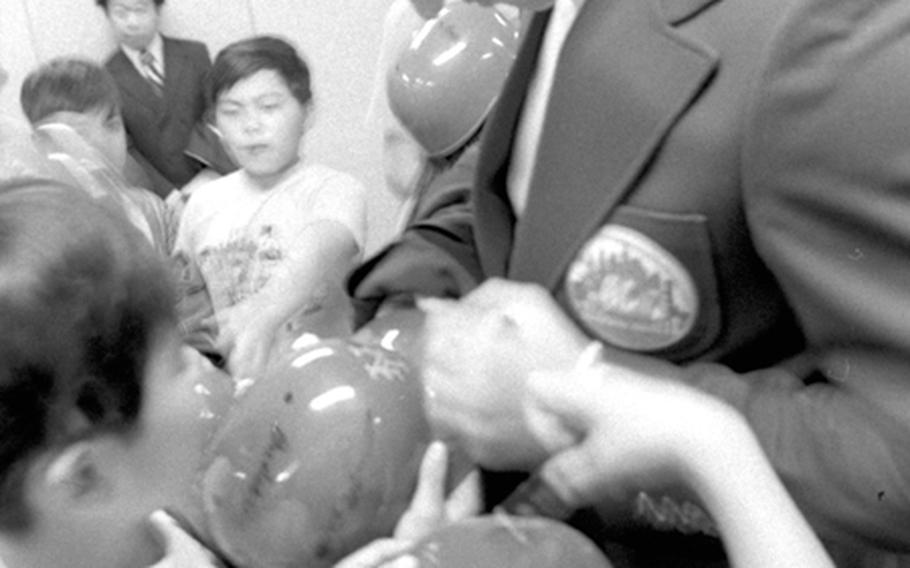 Mets pitcher Jerry Koosman signs autographs for fans at the airport in Tokyo. (©Stars and Stripes) 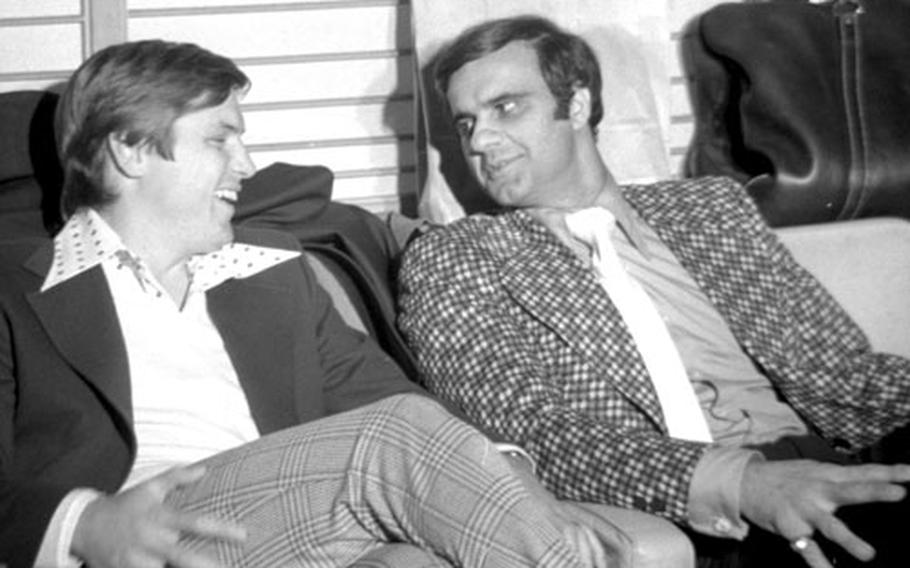 New teammates Tom Seaver, left, and Joe Torre talk after arriving in Tokyo. Torre had just been acquired from St. Louis before the trip. (Bob Page / ©Stars and Stripes) 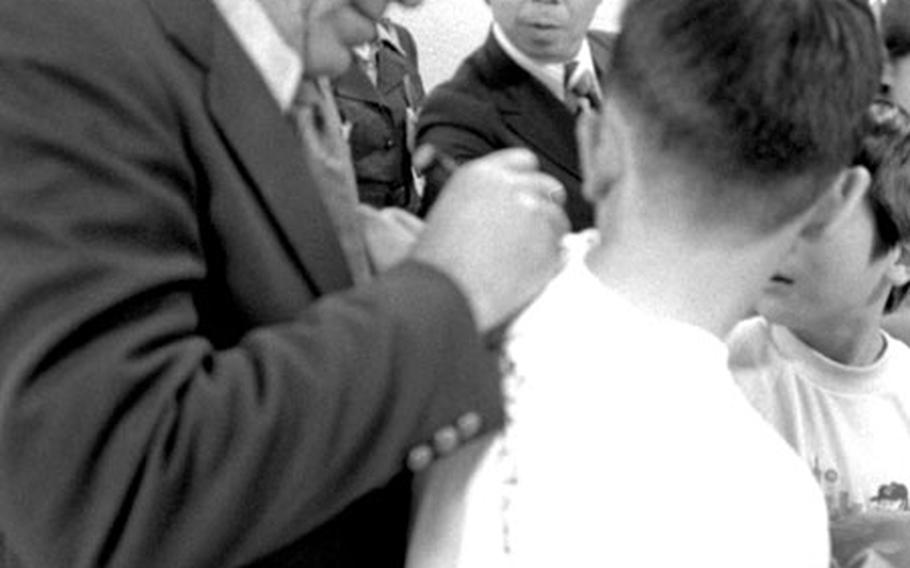 Yogi Berra signs a t-shirt for a fan. (©Stars and Stripes)

TOKYO &#8212; Lawrence "Yogi" Berra and his New York Mets&#39; baseball power are, if nothing else, anxious to get into their first game of the Japanese goodwill baseball tour.

The Mets arrived at Tokyo International Airport Thursday night amidst lights, cameras, Japanese Little Leaguers, fans and a fanfare that Dr. Henry Kissinger would have felt honored to receive.

"We plan on giving the fans some good hard baseball action," Yogi explained. "I think that everyone who comes out to the games will really enjoy the Mets&#39; brand of ball."

The Mets will open up against the Yomiuri Giants Saturday at 1:30 p.m. at Tokyo&#39;s 50,000-capacity Korakuen Stadium. They&#39;ll play there again Sunday and then travel to Sapporo&#39;s Maruyama Stadium for their third meeting with the Yomiuri Giants Tuesday.

The 18-game tour has been organized by Tokyo&#39;s Yomiuri Shimbun newspaper to coincide with the paper&#39;s centennial.

"Oh, we might be a little bit rusty in the first couple of games," Berra explained. "We haven&#39;t been playing any serious kind of ball for three weeks now.

"But after we work the kinks out, we&#39;ll really give the fans a great game.

"After all," he grinned, "we&#39;ve got what I consider to be the three best pitchers in the game."

Those three include ace hurler and Cy Young Award winner Tom Seaver, southpaw Jerry Koosman and Jon Matlack, who some sports writers are referring to as the "pitching ace of tomorrow."

There was speculation earlier that Seaver wouldn&#39;t be making the Japan trip because of a recurring hip problem. If it was still bothering him Thursday night, it didn&#39;t show during the air terminal welcoming ceremony.

"I feel great," both he and Koosman exclaimed.

"I feel like doing some bowling," Seaver added. "Are there any good bowling alleys in this town?"

Torre was acquired by the Mets from the St. Louis Cardinals for pitchers Ray Sadecki and Tommy Moore just before the Mets launched their Japan jaunt. Torre joined New York after six seasons with the Cardinals and eight with the Braves. He was the N.L.&#39;s Most Valuable Player in 1971 and has been named to nine All-Star teams.

Milner, now 24, has been tabbed as "Hank Aaron Jr." He hails from Atlanta, Ga., the town for which "Hammering Hank" has pounded out the majority of his home runs and he (Milner) has become the most powerful hitter on the Mets&#39; current roster. He finished .252 for the season with 20 home runs and 63 RBIs.

The Mets finished their 1974 season with a fifth-place slot in the National League East Division pennant race with 71 wins against 91 losses.

The Mets held a two-hour workout at Tokyo&#39;s Korakuen Stadium Friday afternoon and Friday night were guests at a reception in the Hotel New Otani, sponsored by the host Yomiuri Shimbun. Team officials visited the Japanese newspaper offices Friday morning.

For most of the Mets and their wives, the Japan trip is an altogether new kind of adventure. But for Yogi, it&#39;s almost like coming back to a second home.

The fire-pluggish faced son of an Italian immigrant first came to Japan 19 years ago in 1955 with the New York Yankees.

"The Japanese style of ball was pretty good then," admitted Berra. "Of course neither Wally Yonamine or Sadaharu Oh were around then." (Berra was wrong. Yonamine was playing for the Giants then. He was a Giant from 1950 through 1960).

Hawaii-born Yonamine managed the Chunichi Dragons of Nagoya to the Central League pennant this season. The Dragons lost the Japan Series to the Pacific League&#39;s Lotte Orions. Oh is Japan&#39;s home run champ.

Two sidelights to this year&#39;s goodwill tour are an Aaron-Oh home run contest and the fact that Oh has just been named Japan baseball&#39;s Most Valuable Player in the C.L.

The much-publicized Aaron-Oh homer battle has been set up as a pre-game exhibition to the Mets-Japan All-Stars game of Nov. 2.

The Yomiuri finished second in their league this year, falling to the Dragons by a .001 percent in the C.L. pennant race.

"How many games on the tour do we plan on winning? As many as we can," Yogi grinned.