From the S&S archives: Mary Martin, 'Dolly!' cast in Tokyo 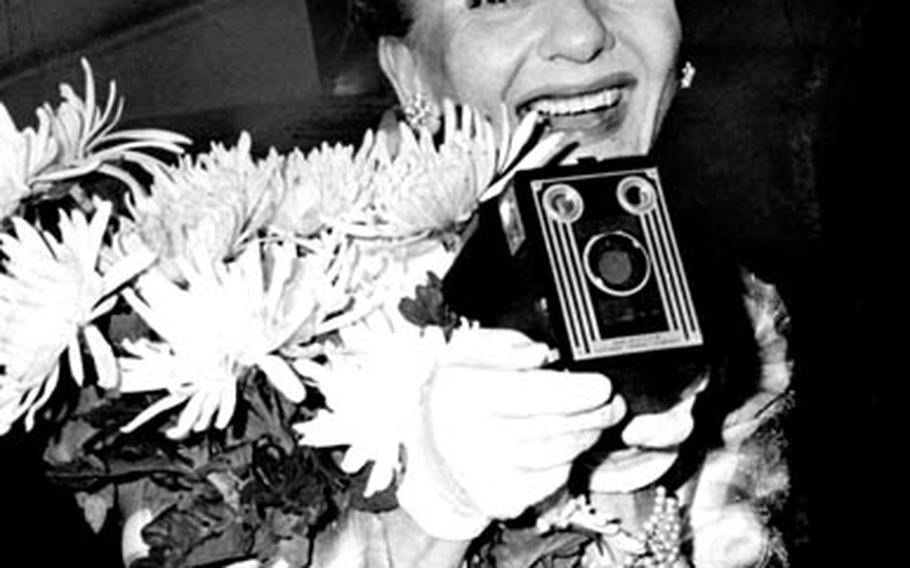 TOKYO &#8212; Mary Martin, bright-eyed star of Broadway and Hollywood, got her first look at Japan Monday evening through the viewfinder of a box camera.

As she left the plane that carried her and the 71-member cast of the hit musical "Hello, Dolly!" from San Francisco to Tokyo, Miss Martin snapped pictures of the enthusiastic crowd of well-wishers that turned out to greet her.

Miss Martin is in Japan to star in the three-week Tokyo run of "Hello, Dolly!" scheduled to open at the Takarazuka Theater Sept. 9. It is her first visit here.

When she finished taking pictures, Miss Martin was given a bouquet by Mrs. Yoshitaka Mikimoto, wife of the president of Mikimoto Pearls.

Mrs. Mikimoto will be official hostess for Miss Martin during her stay here.

At a press conference shortly after her arrival, Miss Martin said she would be "delighted" to go with the show to Vietnam in place of its suddenly canceled Soviet tour.

"Hello, Dolly!" had been scheduled to play in Moscow and Leningrad immediately after its Tokyo road show, but the Russians canceled it only a week before the Tokyo opening.

Producer David Merrick now has asked permission to stage the show for American servicemen in Vietnam in place of the Russian appearance. He is awaiting a go-ahead from the U.S.

Doesn&#39;t the situation in Vietnam deter Miss Martin from touring the battle-torn country? Not a bit, she said.

"It&#39;s no more dangerous in Vietnam than it is in Los Angeles," said Merrick, obliquely referring to the recent race riots in the California city.

"It&#39;s no more dangerous than the freeway," said Miss Martin with a bright smile.

"We have a perfectly wonderful show," Miss Martin said. "We really felt we had something to bring to the Russian people. So I am more disappointed for them than for us."