From the S&S archives: Marines returning in peace to hard-won Iwo 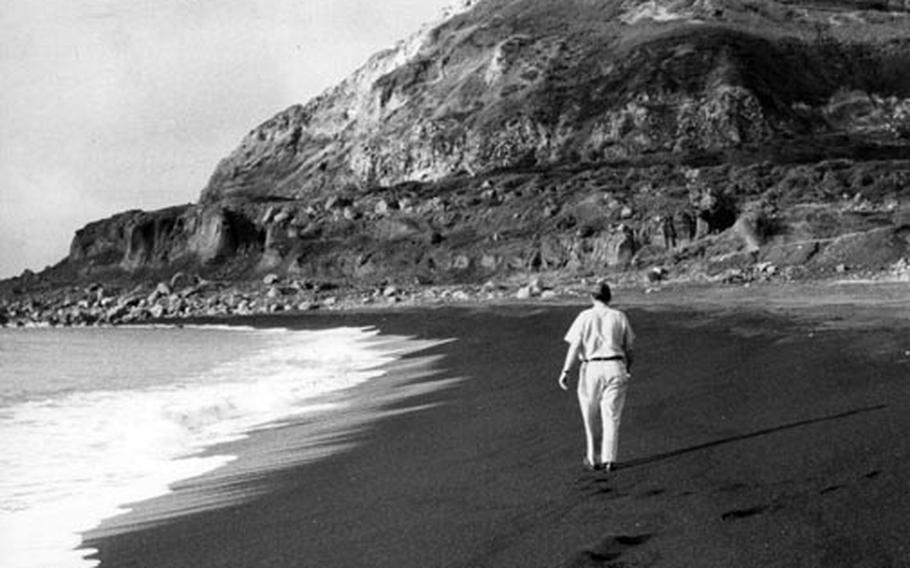 Air Force Capt. John S. Gunnison, who took part in the World War II invasion of Iwo Jima as a Marine 15 years earlier, walks along the beach toward Mt. Suribachi during his first visit to the island since the battle. (Chico Gracia / ©S&S)

IWO JIMA &#8212; The U.S. Marines will land on Iwo Jima and secure Mt. Suribachi Friday for the second time in 15 years.

They will land this time on the island&#39;s lone airstrip and ride up the mountain they once took at the tortuous cost of a life every few yards.

On the bald, rugged crown of Suribachi, they will take a moment to look down at 3,000 yards of open beach and remember the Leathernecks who hit the black sands and faced a storm of bullets and shellfire on Feb, 19, 1945.

The marines will be there for a brief ceremony at a well-known but rarely seen monument on the southwest corner of the 500-foot mountain. On the simple concrete memorial is the legend, "Among the Americans who served on Iwo Jima, uncommon valor was a common Virtue &#8212; Nimitz."

Below the flag that always flies, another inscription reads: "23 February 1945, Old Glory was raised on this site by members of the 2nd Bn., 28th Regt., Fifth Marine Division."

A Marine&#39;s marine who carries the glory and horror of the Iwo Jima battle in his memory will pay a brief tribute Friday to the men who fell on the beach and the mountain.

Wornham, as a Marine colonel, won the Navy Cross while commanding the 27th Marine Regt. on Iwo Jima. He heads the 5th Marine Div. Assn., whose past and present Leathernecks on both sides of the Pacific paid for the plaque.

The flag will always be there. It has flown day and might on the mountain since Suribachi was won, along with flags that fly over Ft. McHenry and the grave of Francis Scott Key.

An Air Force&#39; captain with the 1362nd Photo Flight at Yokota AB near Tokyo remembers the first day the Stars and Stripes flew on Suribachi.

The black sand was ripped by bullets and shrapnel as Gunnison and the other marines jumped from their barges and threw themselves on the beach.

Suribachi, a dormant volcano, seemed to be erupting from slope to summit as naval guns and dive bombers blasted it. The Japanese still held the mountain and much of the rugged rock above the beach.

Gunnison had made a friend &#8212; someone he met on the ship or back at the staging area on Guam.

"It&#39;s just the kind of friend you make in wartime," Gunnison said, "Just a casual sort of buddy.

"We hit the beach together. There were explosions everywhere. The noise was terrific. He said something I didn&#39;t hear. I turned my head and shouted at him. He said in this calm, quiet voice &#39;I&#39;m hit.&#39;"

Gunnison looked and saw that the man&#39;s left arm was ripped from shoulder to elbow.

Gunnison and the other men, all replacements for the 3rd Marine Div., spent the same day and night unloading supplies under fire.

But Japanese defenses on Suribachi crumbled under the pounding of naval artillery and attacks by the marines,

"About the middle of the next morning," Gunnison said, "somebody yelled &#39;Hey, the flag&#39;s up on the mountain.&#39; I looked up and saw that it was. Everybody was cheering."

The beach and the mountain were only the costly beginning. The marines moved inland, where most of the Japanese defenders holed up in a maze of caves and fought to the last life and bullet.

Gunnison recently flew to Iwo Jima for his first look at the beach, mountain and island in 15 years. Remembering its seared barrenness in 1945, he was surprised at the lush foliage that covers it now.

Most of the caves, filled with old bones and ammunition as deadly now as it was then, have been sealed by bulldozers. Shattered bunkers overlooking the beach are covered with vines.

Gunnison saw an old, weed-grown, airstrip-lone of the prime objectives in the Marine drive &#8212; and couldn&#39;t shut out another memory,

"One of my best friends had his leg blown off here," he said. Then he turned and walked away,

"Take the worst and weirdest traffic accident you ever saw," be said. "The shock ... the blood ... the twisted bodies. Multiply it a thousand tunes and you have Iwo Jima,"

"We&#39;ve got no gripe coming," says Bagwell, who is wire chief at the 1964th Airways and Air Communications Service Sq. "We just have to look at that mountain and beach and think of the guys who had to take it. We feel, if there are that many lives lost here, we&#39;re proud to be here.&#39;

The men on Iwo Jima pay a curious sort of respect to another monument &#8212; a gray stone and two white wooden pillars honoring Lt. Gen. Tadamichi Kuribayashi, who commanded the Japanese garrison until he committed suicide in the last hours of the battle.

There are only rumors as to how the stone got there, one being that it was sent over by a group of prominent Japanese after the war. There have been no Japanese on the island since the end of the war.

But the stone and two pillars are always clean and the grass around them is kept neatly trimmed. The airmen on Iwo Jima see to that.