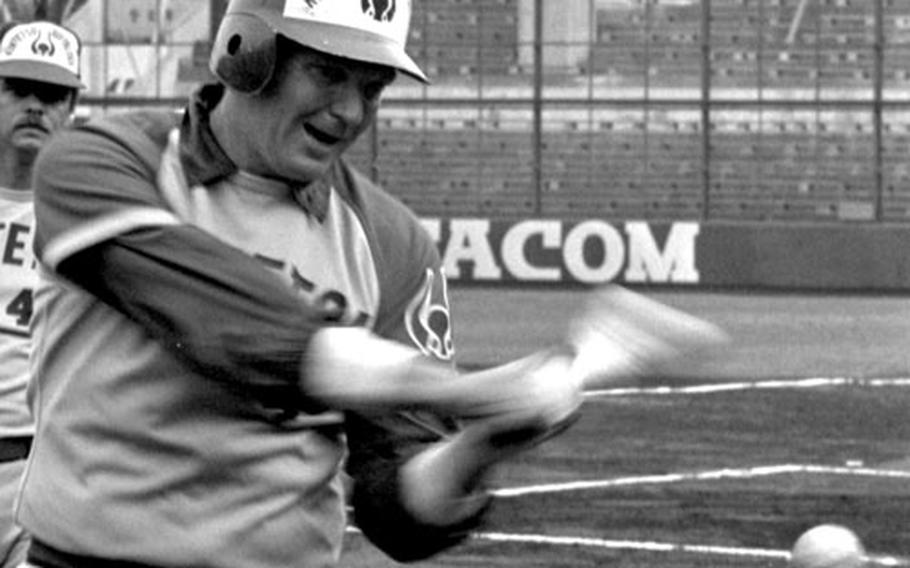 Charlie Manuel gets ready for a game during his time with the Kintetsu Buffaloes. (William Franqui / ©S&S)

TOKYO &#8212; Being a designated hitter for the Kintetsu Buffaloes may not be Charlie Manuel&#39;s fountain of youth &#8212; but it certainly isn&#39;t aging him any, either.

Manuel, 35, in his first season with the Buffaloes, is off to one of his best starts after coming to Japan four years ago.

He belted his 20th home run Wednesday night against the Seibu Lions and is one of the main reasons Kintetsu leads the Pacific Division by six games.

Earlier this season Manuel said, "No, I don&#39;t mind being a designated hitter. In fact, I&#39;m enjoying the heck out of it.

"I feel stronger now than I&#39;ve ever felt and I think being a designated hitter will add years to my career."

While this year has been a banner one so far, Manuel found the going a bit rocky his first couple of years here.

"Most major leaguers come over here and figure, &#39;If I can&#39;t hit 50 home runs here, then somthin&#39;s wrong.&#39; But, the pitching style is so different and the culture shock takes so much getting used to that the first year or two is pretty rough."

What about a language barrier?

"Nah. The other guys know enough English to kid with me and I know enough Japanese to kid back. The language problem doesn&#39;t really bother me now.

Manuel, who played with the Minnesota Twins and Los Angeles Dodgers before coming to Japan, has joined ex-San Francisco Giant Chris Arnold in the Buffaloes&#39; lineup. While they get along, Manuel feels that having two foreigners playing on the team could lead to problems.

"If you have two guys, it&#39;s a natural thing for some sort of rivalry to crop up. Each guy is trying to outdo the other. Probably the ideal thing would be either have one foreigner on a team or anything over two," he said.

Manuel played for the Yakult Swallows last year and led them to the Japanese baseball crown. For his reward, the Swallows traded him to Kintetsu.

"They said it was my fielding, but it was a matter of a personality conflict between me and the coach.

"Hell, I played pretty well defensively. The outfield they had wasn&#39;t that strong anyway."

Despite the turmoil, Manuel hit 39 home runs last year and knocked in 103 RBIs while clipping along at a .312 batting average. This after setting, a record for foreign players of 42 home runs the year before.

He is batting .369 this season with 20 homers, 59 hits and 52 RBIs, and he tied a Japan record Wednesday night with 15 homers for the month of May. He was walked in three at-bats after hitting an RBI-single on the final day of May, preventing him from breaking the record.

And, while Yakult finds itself wallowing in the Central League race, Kintetsu, behind Manuel, faces a better than even chance in rounding up its first-ever pennant.