From the S&S archives: Madrid? No, señor, Peking 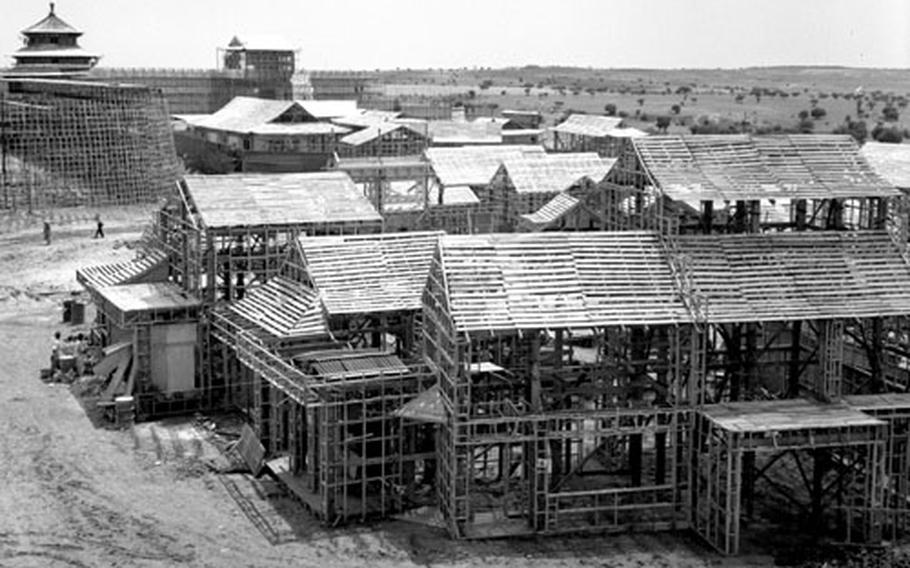 Buy Photo
Part of what was called the largest motion picture set ever constructed. (Norm Zeisloft / ©Stars and Stripes) 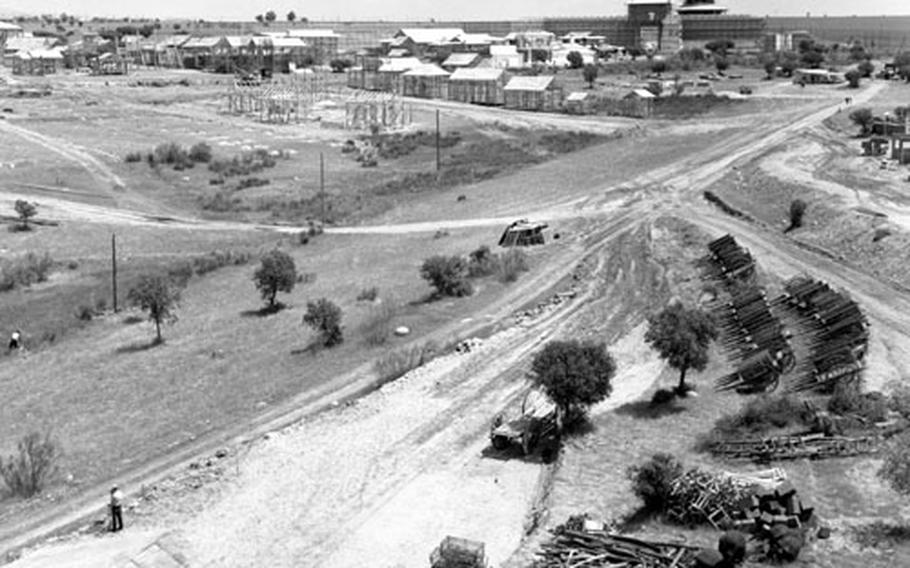 Buy Photo
Construction continues on the set of . (Norm Zeisloft / ©Stars and Stripes)

IF ONE OF the astronauts happens to land 16 miles northwest of Madrid one day soon, he&#39;ll probably think he&#39;s made the biggest navigational boo-boo since Wrong Way Corrigan.

Instead of sunny Spain and smiling senoritas, he&#39;ll find himself inside the walled city of Peking surrounded by curious Chinese. Not only that, but he might get caught in the cross-fire of the Boxer Rebellion.

Planting the pagodas on the plains of Spain is Samuel Bronston, the movie producer most determined that DeMille won&#39;t be missed. Currently baling the box office booty of "El Cid," he plans to follow his $6 million rebellion with another modest production, "The Fall of the Roman Empire."

For the benefit of the more casual readers of the sports pages, it might be explained that the Boxer Rebellion had nothing to do with pugilism.

Back in 1900, a goodly number of Chinese decided it was time for the Yankees, and all other foreigners, to go home. To make their point, they started off with the massacre of missionaries and assorted Chinese who had been converted to Christianity.

Then came the siege of Peking. The diplomats, military guards, and even a newspaper reporter, making up the legations from 11 countries, held out for 55 days while awaiting the arrival of relief troops.

To stage this Oriental Alamo, titled "55 Days at Peking," the movie makers have spent a million dollars or two building "the largest motion picture set ever constructed anywhere" in a barley field. Apparently there was some feeling that Mao Tse-tung wouldn&#39;t prove cooperative if they attempted to use the original.

In any event, the new Peking is an impressive sight. The Temple of Heaven and other major buildings were re-created with the most exacting detail from a mountain of research material. The Tartar Wall, like the Great Wall of China, is large enough for a road along the top. "If we told how much research goes into one of these films, the public wouldn&#39;t believe it," one publicity man commented with a touch of sadness.

Some 1,000 workers using everything from bulldozers to burros have been working for months completing the set. Since an earlier Bronston production, "King of Kings," was almost changed to "Gone With the Wind" after a summer storm whipped into the set, the new Peking is going to be tied together with some 250 miles of steel tubing. Then most of it is going to be blown apart.

The film is being shot during the summer months that are dry enough in Spain to make a camel complain, but a lot of the action takes place during the rainy season in Peking. This made it necessary to drill two deep wells and build a 500,000 gallon reservoir.

Greenhouses were constructed to provide the necessary plants, while stables were needed for the assorted animals, including 150 Mongolian-type horses.

The stable of talent assembled for the picture is also impressive. Heading up the cast are Charlton Heston, Ava Gardner and David Niven. Featured roles go to Dame Flora Robson, Leo Genn, John Ireland and Kurt Kasner. Dimitri Tiomkin will make the music, and Jack ("River Kwai") Hildyard will be behind the camera.

The man responsible for pulling the strings together on this multi-million package is director Nicholas Ray, a man once described as "a nice guy walking through Sodom." Modest and considerate, he bears no resemblance to the flamboyant types who do their directing with a riding crop.

However, he doesn&#39;t always tell the truth. When asked which problems were proving the most monumental at the start of the filming, he replied, "I don&#39;t have any problems." It should be noted that he said this with a slight smile.

One problem that presents itself soon as shooting starts is finding time to sleep. He has found the solution for this one &#8212; he just cuts his sleep back to about four hours a night during the months the filming is in progress. "I&#39;ve been doing it for years," he explained.

While Ray maintains everything is rosy, some of the others connected with the film are necessarily more realistic. The casting department, for example, was faced with the problem of coming up with a respectable number of Chinese types vital to the film.

Since the number of Chinese in Spain is relatively small &#8212; and they won&#39;t leave their restaurants and tailor shops &#8212; it was necessary to chase down all the available Chinese in the major cities of Europe and fly them to Madrid. London proved the best source of supply, with an added bevy of Oriental lovelies fresh from the stage production of "Suzie Wong."

Recruiting the necessary British and American bodies was not so much of a problem. A notice posted in the Madrid British-American Club helped, and several youngsters out of school for the summer will be making their movie debut.

Some of the headaches may be yet to come. Miss Gardner, who homesteaded in Madrid quite some time ago, will be making her first picture in three years, and the world press is already calling for interviews and such.

The problem is that Ava shares an allergy for the press equal to one of her former husbands, a Mr. Sinatra. Members of the local movie colony have been laying odds that the Boxer Rebellion would be a quiet affair compared to the fireworks that would ensue when the studio publicity men tried to con the divine Ava into cooperating with the press.

But to the surprise of most everyone, the beautiful actress voluntarily turned up for the festivities marking the first day of shooting despite the presence of about 100 reporters and photographers. Not only that, but she smiled graciously when the flashbulbs began to pop.

As for the serene director Ray, all he has to do is worry about everything from the weather to the pigtails falling off his ersatz Chinamen. This is his second "epic" and his first, "King of Kings," took a merciless pounding from the critics.

Problems? Why should anyone have problems with a simple little $6 million movie like this?