From the S&S archives:Liza's back, thrilling the fans in Frankfurt 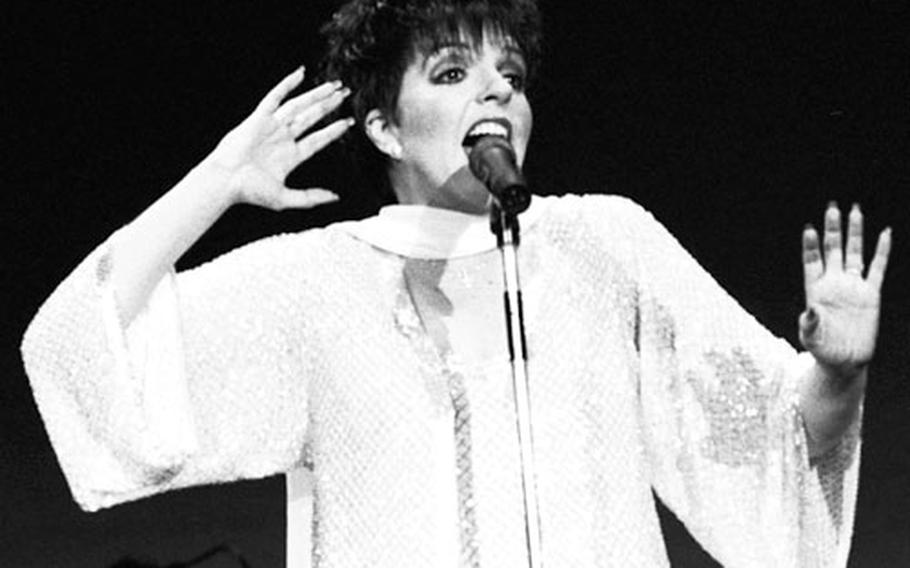 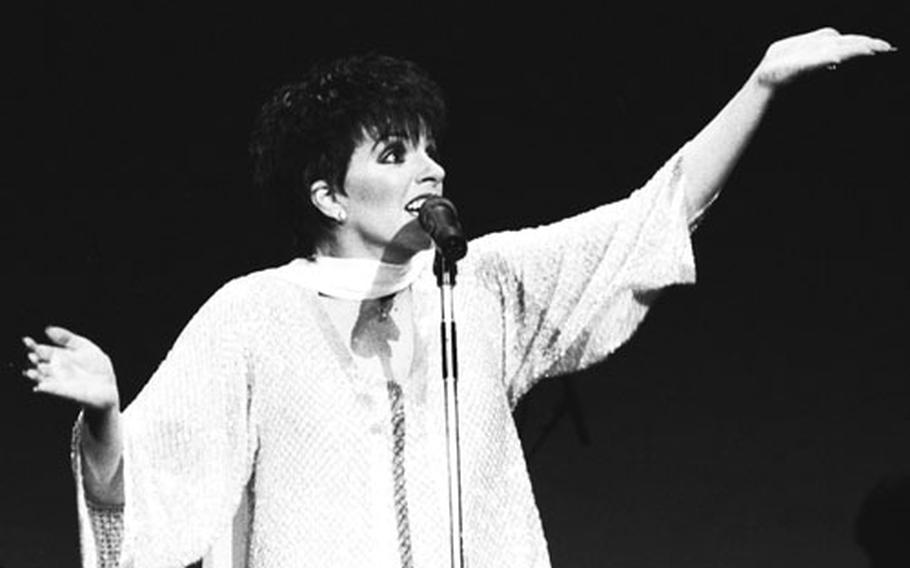 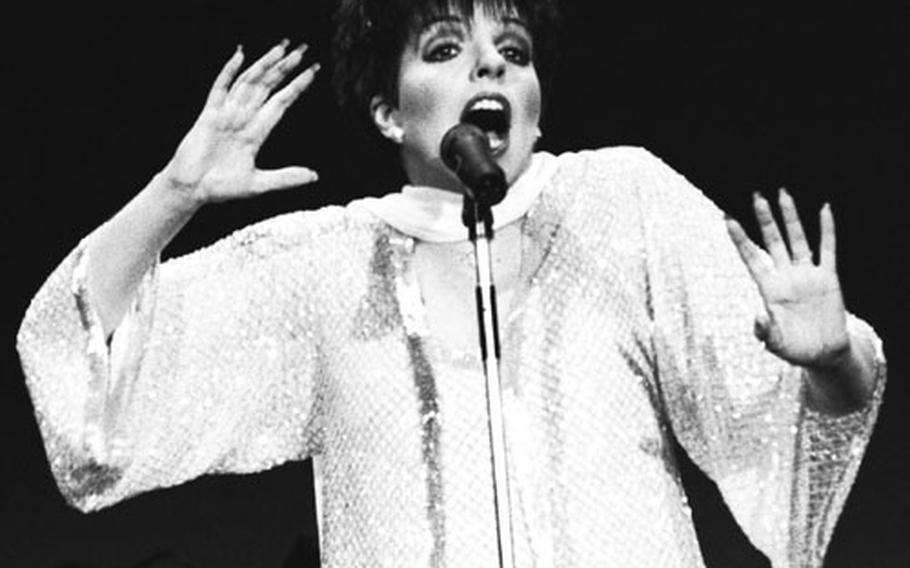 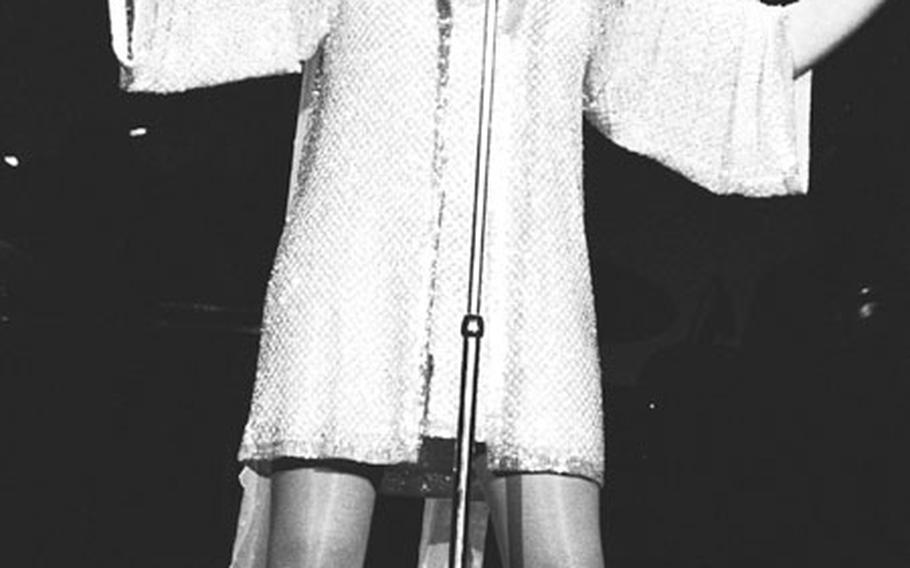 HER FANS REFUSED to leave.

Ten minutes earlier she had left the stage. The house lights were already on. Still, the fans cheered, whistled, screamed. They wanted more.

Back from a bout with drugs and alcohol that nearly ended her life and career. Back from the personal tragedies &#8212; the death of her parents and two failed marriages.

Liza is back, and she recently brought her one-woman show to Europe.

Liza Minnelli is one of the most versatile entertainers in show business. From Broadway to Hollywood, from a recording career that began when she was a teen-ager to a solo performer who sold out New York&#39;s Carnegie Hall 16 nights in a row &#8212; Liza has shown she can do it all.

Born March 12, 1946, to singer/actress Judy Garland and Academy Award-winning director Vincente Minnelli, Liza had been on stage and in front of the camera by the time she was eight years old. After her parents&#39; divorce in 1951, she lived with her mother, a life of touring from city to city, show to show. The experience of this vagabond life could not deter Liza from a life of her own in the theater.

Liza&#39;s 1965 Broadway debut was in Flora and the Red Menace, for which she received a Tony Award as best actress in a musical. Her silver-screen debut came with Charlies&#39; Bubbles in 1967. A short time later her mother died of a drug overdose.

Liza went on to become one of show business&#39; biggest stars, performing in night clubs and concert halls around the world. Her TV show, Liza With a Z, was a huge success, as was her 1977 Broadway musical revue, The Act.

But Liza&#39;s private life was not as successful. Two failed marriages (she divorced Peter Allen in 1970 and Jack Haley Jr. in 1979) and her inability to have children brought on a drug and alcohol problem. She signed herself and husband Marc Gero, whom she married in 1979, into California&#39;s renowned Betty Ford Clinic.

This summer Liza made her comeback in New York City&#39;s Carnegie Hall, doing what no other performer has done before: She sold out the hall 16 nights in a row.

It was this success that brought Liza back on the road and to the Frankfurt Festhalle recently, where a well-dressed crowd of some 5,600 paid between 40 and 120 German marks (about $24-$70) each to see the show.

The stage was bathed in dim light. An 11-piece orchestra set on risers was barely visible behind a lone microphone stand. Suddenly a spotlight flickered to life. Liza entered, stage right, dressed in a short white sequined dress. Striding to the microphone, she burst into Johnny Nash&#39;s I Can See Clearly Now. During the 11-song first act she performed such standards as Old Friend, Here I&#39;ll Stay and If You Hadn&#39;t, But You Did.

Looking much the same as she did twenty years ago, Liza captivated the audience with her voice. With an excellent orchestra led by Bill La Vorgna, she received the musical backing she needed to act, dance and sing her repertoire.

After a 15-minute intermission, Irving Berlin&#39;s Alexander&#39;s Ragtime Band opened the second part of the show. Liza, now dressed in a black sequined pantsuit., marched across the stage as if she were indeed leading the band. Bringing out singer/pianist/composer Michael Feinstein, one of lyricist Ira Gershwin&#39;s last pupils, she performed a medley of Gershwin tunes, sitting on a stool as Feinstein played the piano. The songs included Our Love is Here to Stay, one of George Gershwin&#39;s final songs.

After Feinstein bowed to thunderous applause, Liza introduced a medley of songs written for her over the years by John Kander and Fred Ebb. The songs, among them Liza With a Z, All I Need is a Break, Sing Happy and Money Money, led up to the show&#39;s finale, Cabaret.

Liza&#39;s most famous song was easily the showstopper, the audience applauding as soon as the first notes filled the hall. Although she wasn&#39;t dressed as in the film; she acted the song out so perfectly it was easy to picture her as Sally Bowles.

Liza&#39;s encore, New York, New York, a song about the city that has given the singer her greatest triumphs, was a fitting climax to the show.

The crowd&#39;s cheers brought Liza out for four curtain calls and another encore, You Made Me Love You, made famous by her mother.

The house lights came on, and Liza came out for three more curtain calls. For 10 minutes the audience remained applauding and yelling for more, but by now Liza was probably taking a well-deserved break.