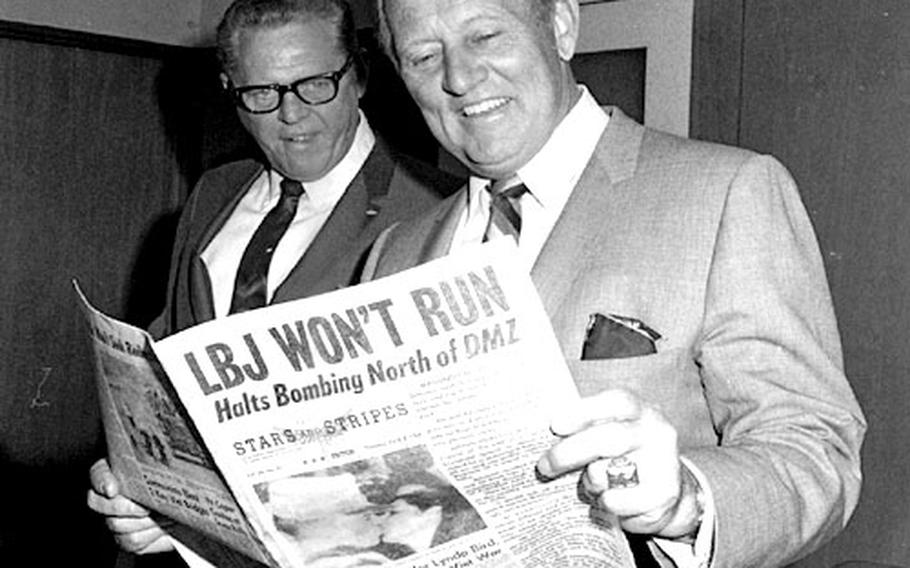 During a visit to Stars and Stripes&#39; Tokyo office on April 2, 1968, TV host Art Linkletter checks out a copy of the paper with a headline about President Lyndon Johnson&#39;s decision not to run for re-election. (Masahiko Nakamure / S&S)

Linkletter came to the Far East to learn how the servicemen and their dependents react to overseas conditions &#8212; "all the things that suddenly happen to an American serviceman and his family who have been picked up, say in Salinas, Kan., and suddenly set down in Yokohama."

Linkletter said he is compiling a backlog of information so he can answer "all types of questions which are usually fired at me from my television audiences in the States.

"I get questions from viewers about life in foreign countries and the many Americans who live abroad, what they pay for apartments, what it costs to live, the type of entertainment, the clothes, everything," he said.

This is Linkletter&#39;s first military tour of the Far East, but he has often visited Japan.

Participants in the show include military dependents with interesting service-related experiences.

On Thursday and Friday, the entire Linkletter crew will visit Korea.

He will be in Okinawa Saturday and will present a full-size House Party at the Stilwell Fieldhouse on Monday.

On April 9, the House Party gang moves to the Philippines. A show is planned at Clark AB&#39;s Bamboo Bowl on April 11.

While in the Philippines, he will also film interviews with two flight nurses who regularly make the run to and from Vietnam and with a Peace Corps volunteer who is teaching modern rice farming to villagers in the area.

Linkletter will also be filmed talking to GIs on the DMZ in Korea.

The party also plans to make a brief stopover in Vietnam before heading back for the States.

The highlights of the tour will be made into a television special to be shown nationally in the U.S. during the summer or early fall.

In addition, a special film will be made on the tour for showing to military wives clubs all over the world.