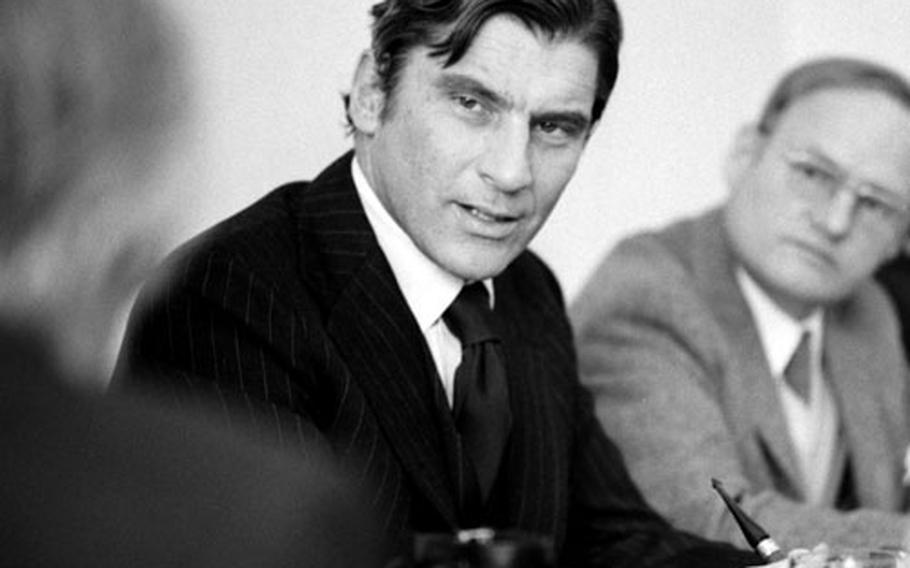 Secretary of the Navy John Warner takes part in a discussion during a visit to Kaiserslautern, Germany, in October, 1973. (Jim Cole / ©S&S)

Secretary of the Navy John Warner takes part in a discussion during a visit to Kaiserslautern, Germany, in October, 1973. (Jim Cole / ©S&S) 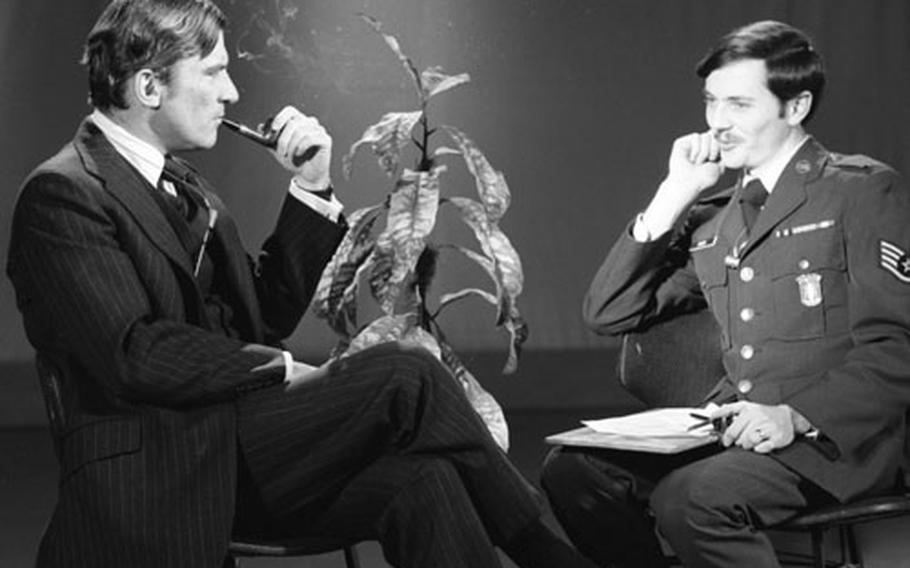 KAISERSLAUTERN, Germany &#8212; Secretary of the Navy John W. Warner challenged members of the Federation of German-American clubs "... to meet the future with brotherhood and confidence."

Warner was the key speaker Thursday night during the opening ceremonies of the Federation&#39;s 26th annual convention here.

The Stars and Stripes erroneously reported Thursday that Warner was scheduled to speak Friday during the convention&#39;s banquet. The featured speaker for that event will be Martin J. Hillenbrand, U.S. ambassador to Germany.

"Let us together," said Warner, "Germans and Americans, though always the masters of art and war, be the builders of a stable and lasting peace."

Warner spoke before an audience of more than 120 men and women gathered in the Rheinland-Pfalz theater. In the audience were dignitaries of the Air Force, Army, German government and the local community.

Warner spoke for about 20 minutes.

He said the Federation&#39;s work is one of "... weaving a fabric of understanding and friendship between our two great peoples which will survive any challenges which future history may bring."

Warner avoided remarks about the Middle East except to say that "we are entering a challenging era." However, he added, "despite the unfortunate and dangerous outbreak of hostilities in the Middle East, war in Europe has never seemed more remote."

Secretary Warner said that NATO created cooperative European security system which "has worked," and that "... is the only reason why some call for a reduction in NATO strength."

The North Atlantic Alliance, Warner said, is "continuing to look for cooperative solutions to common problems. We in NATO are not locked into past patterns or attitudes. NATO is a living, working organization. With mutual trust and shared goals as our foundation, we shall find solutions to the problems of the future."

Warner talked about the relationship between Germany and the United States. He said that "a relationship that survives changes in our respective governments and which respects the independent choices which we each must make for our own societies ... is essential for the success of the North Atlantic Alliance."

He said that during the past 26 years, whenever Germany has been threatened, America has stood behind her. Germans have ". . . welcomed the presence of American military men and women ...," according to Warner, "because they know why Americans are here."

Warner said, "In fact, the success of our relationship as free nations, perhaps more than any other postwar, bilateral relationship, inspires confidence in the future.

"... We feel as though we can rely on you to do your share for the security of the North Atlantic Alliance. You know you can continue to count onus to do ours."

Warner pointed to the great German American statesman and political reformer Carl Schurz. He cited a statement Schurz made in 1899 during a speech in Chicago. "My country right or wrong, when right, to be kept right, when wrong, to be put right."

Warner presented the city of Kaiserslautern Lord Mayor Hans Jung with an original letter that Schurz wrote in Washington, D.C., on Dec. 5, 1872.