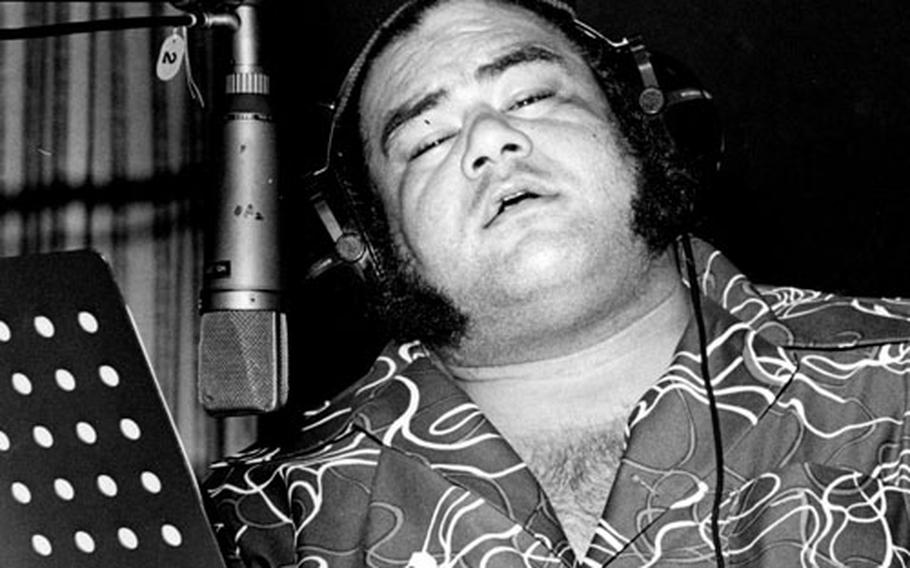 Jesse Kuhaulua, also known as Takamiyama, belts out a tune during a recording session in Tokyo in 1977. (Dallas Baker / ©S&S)

Jesse Kuhaulua, also known as Takamiyama, belts out a tune during a recording session in Tokyo in 1977. (Dallas Baker / ©S&S) 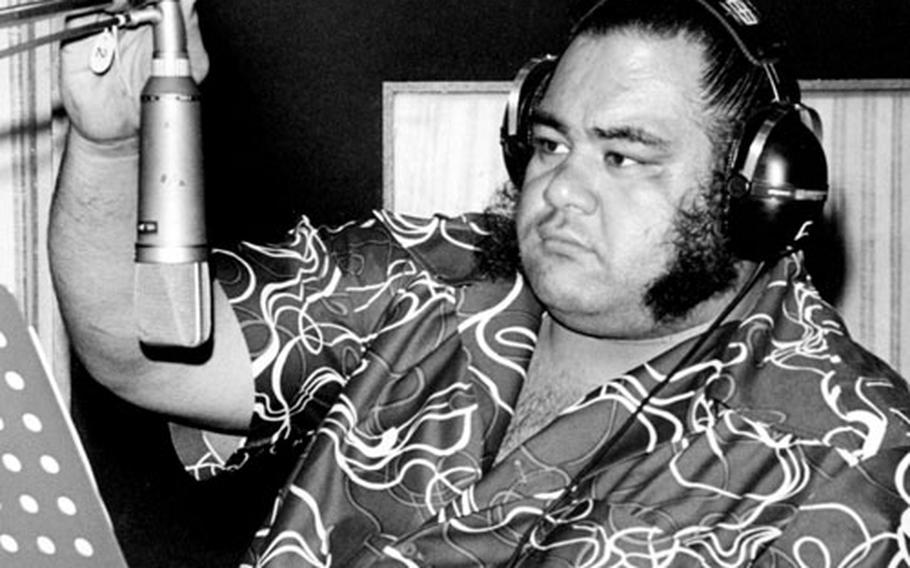 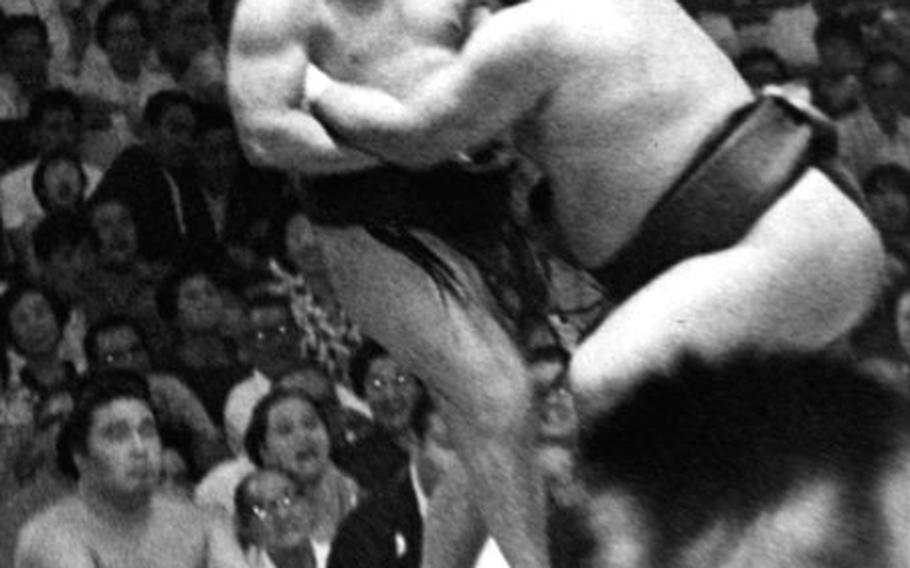 1972: Jesse shoves Asahikuni out of the ring to win the Nagoya tournament, thus becoming the first foreigner to take a title in te Japanese sport. (Dick Berry / ©S&S) 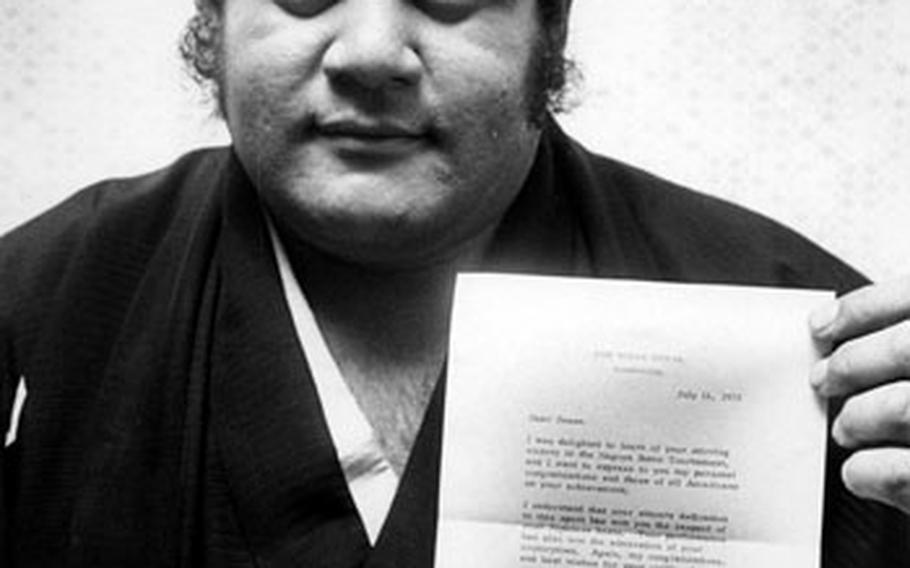 Jesse displays a letter from President Nixon congratulating him on the Nagoya victory. (Katsuhiro Yokomura / ©S&S) 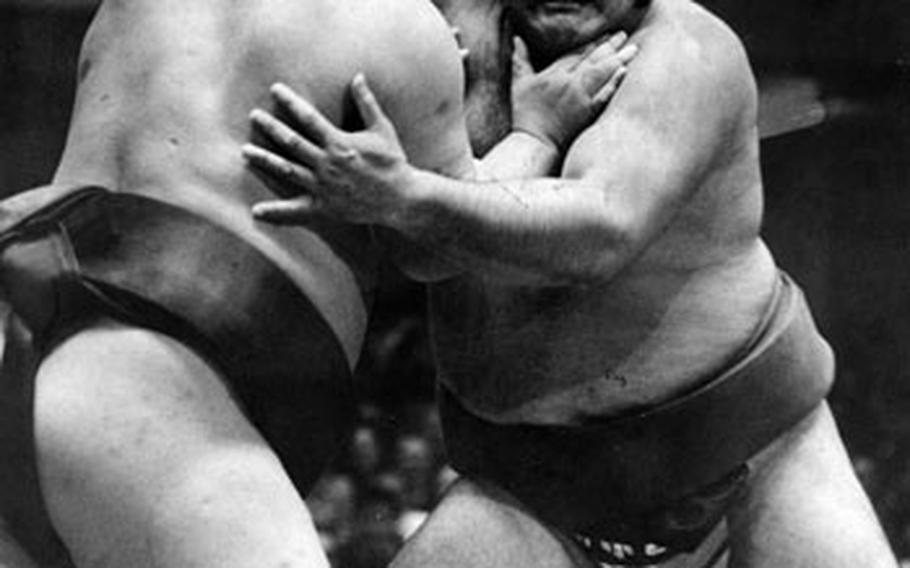 TOKYO &#8212; "I&#39;m a lover, not a singer," protested "Jesse" Takamiyama, 400-pound sumo wrestling star, as he missed his cue for the fourth time at recording studios in downtown Tokyo where he&#39;s cutting his first disco album.

The Hawaiian, the first American to tackle the ancient Japanese sport of sumo 13 years ago, was adding final touches to an album called "Super Jesse" due for release by Toshiba English Music Industry in December.

"I never had confidence because of my voice," he explained in a rasping, near-whisper, the top volume he can achieve because of damage done to his vocal chords when sumo opponents&#39; hands, backed by about 300 pounds of. charging flesh, crash into his throat.

Jesse carries a pretty good tune &#8212; even though his voice sounds like something something between a landslide arid a gravel truck in low gear.

On the album, he&#39;s backed by other vocalists, the razzle-dazzle DJ talk of Tech. Sgt. Larry Sawell from Japan&#39;s Far East Network and the hot disco sounds of "Ricky and the 1,960-Pound Band."

Now that he&#39;s heard his tapes and the preliminary single released a couple of weeks ago, does he like it?

"At first I wasn&#39;t too happy, but a couple of days after they started playing the record in some discos &#8212; well, these critics said it sounded good, that people smiled a lot when they heard it, enjoyed the music and danced a lot. They said the people recognized me ..." He looked pleased.

Another reason Jesse decided to do the album, he said, was because another recording studio did a record on him, but used someone else to imitate him.

"Mine is not junk like that. It&#39;s more expressive of my feelings," he rumbled indignantly.

Behind sound-proof glass in the studio, the 6-foot-4 Jesse, looking like a Volkswagen in maternity wear and head set, expresses his feelings with a combination of song, narration and sumo-lingo grunts. Heavy on the grunts. Quite the entertainer, he manages to distract the crew and fellow musicians continually with blunt jokes and dramatic facial expressions.

The fuzzy-faced Jesse, oldest sumo wrestler in the business at 33, has done a series of commercials for Japanese television which have become famous with foreigners and Japanese alike for their ridiculous humor. In one, the big fat man wears a pinstripe suit and does a "soft shoe." In another he wears a nightgown and sleeping cap and cuddles a Japanese pillow.

So considering his acting and singing debuts, does he think he might go into showbiz eventually?

Someone in the. studio mentioned a few six-digit contract figures as possible motivations.