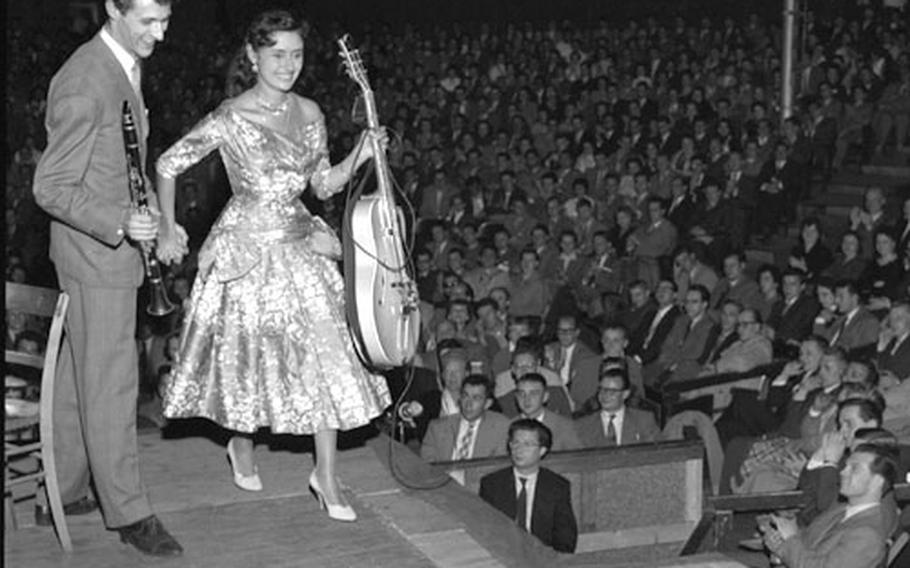 Silvio and Caterina Valente, onstage at a May 28, 1955 jazz show in Frankfurt. (Red Grandy / ©Stars and Stripes)

Silvio and Caterina Valente, onstage at a May 28, 1955 jazz show in Frankfurt. (Red Grandy / ©Stars and Stripes) 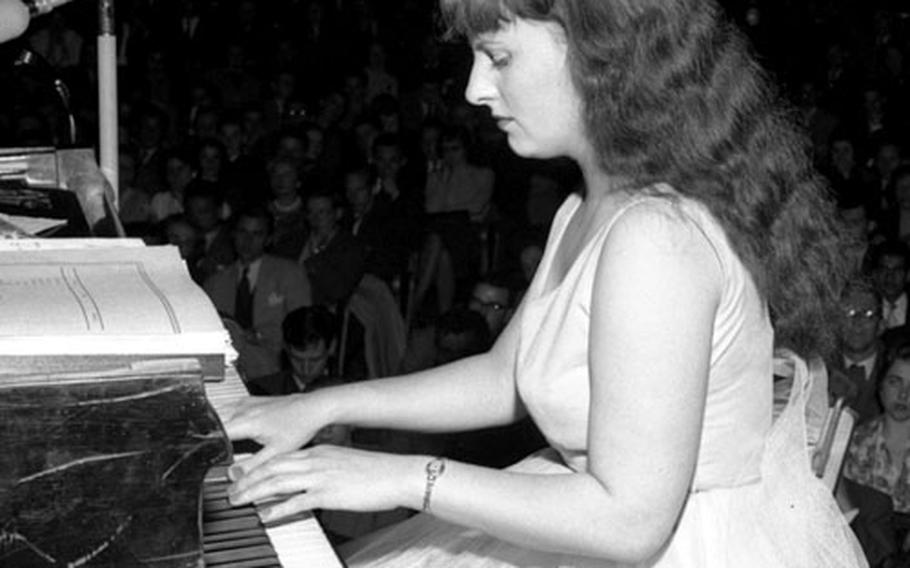 German jazz pianist Jutta Hipp performs at the Frankfurt show. Hipp&#39;s musical career was on the rise (she recorded an acclaimed album with Zoot Sims) when she retired in the mid-1950s and became a seamstress in New York; she died in obscurity in 2002. (Red Grandy / ©Stars and Stripes) JAZZ CONCERT German style? Members of the band were German, and the singer was a German national &#8212; and half the audience was German. But the spirit was Jazz, American, Al. Germans and Americans stomped, whistled, clapped and roared.

Band leader Kurt Edelhagen, a Stan Kenton inspired man, is hailed by most German enthusiasts and critics as the leading exponent of jazz in Germany. Edelhagen, whose band recently gave a concert in Kaiserslautern featuring singer Caterina Valente, takes a slightly modest view of his abilities.

Trained in music since he was 8, Edelhagen, a big dark, smooth-featured man, says his group is the only German radio dance band who plays "this kind of music" &#8212; i.e. pure jazz.

The jazz master started in the classical music field. After World War II, he played in a jazz combo in an English army club in Herne. "I made a 180 degree swing," he said; "from classical to jazz." In 1946 he played for U.S. troops. American soldiers heard him and they liked his music so much, they returned to the States talking about it. He graduated to various radio stations, including stints with AFN, and since 1952 has been at Baden-Baden.

While playing for the Americans, he made contact with his idol, Stan Kenton, and received arrangements from him. When Kenton toured Germany in 1953, he visited Edelhagen. Kenton had heard Edelhagen. records, and had heard about the German from servicemen who returned to the States.

The 35-year-old band leader has never played in America but he has toured most of the continent. His bigtime jazz discovery, Caterina Valente, however, has toured the States and her records are popular there. Her version of "Malaguena" has reportedly sold more copies than any of the other 347 versions of the song.

Caterina, in private life the wife of juggler Erik van Aro, is now on her own. But whenever she can she sings with Edelhagen&#39;s band and where they play together, the house comes down. In Kaiserslautern there was standing room only. Outside the concert hall, police were called to break up a young jazz-hungry mob that couldn&#39;t get in.

The pair performed with the same easy informalness that was the spirit of their rehearsal &#8212; only Caterina&#39;s poodle Susie was absent. Now Caterina is headed for more recordings and has a date to work in a film.

Edelhagen is modest but for Caterina and his musicians he has nothing but praise. He thinks Caterina is the greatest, and says his band members are the No 1 and No 2 jazz musicians in Germany.