From the S&S archives: Jan-Michael Vincent: 'It's working' 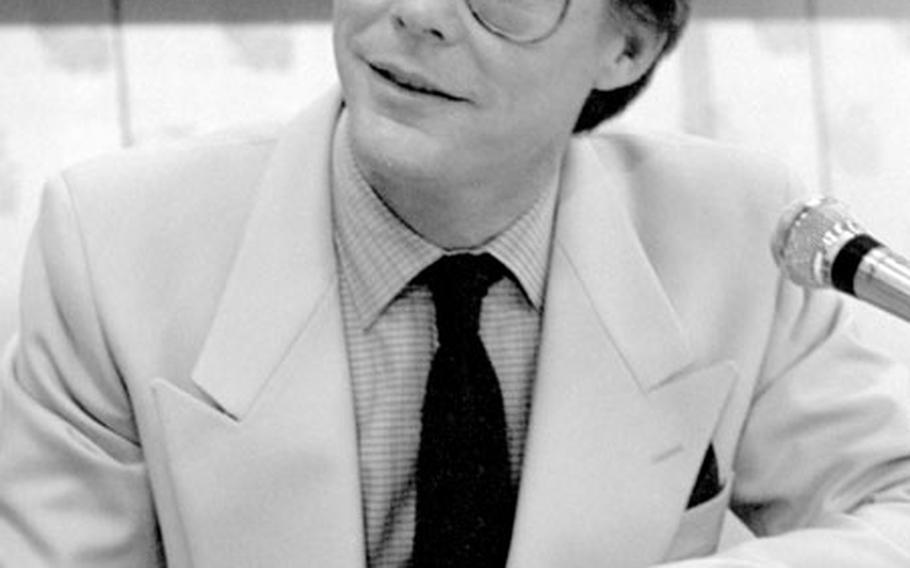 Actor Jan-Michael Vincent doesn&#39;t worry too much about becoming "typecast" as the stereotypical macho male.

Vincent stars as Byron Henry, a strong-yet-sensitive soldier of fortune caught up in the events which led to World War II in Dan Curtis&#39; television production of Herman Wouk&#39;s "Winds of War."

The 39-year-old Denver native was recently in Japan on a promotion tour for the 18-hour miniseries, which is showing this week on Japan&#39;s Asahi Television Network.

Vincent is no stranger to military roles. In 1970 he starred in the critically acclaimed television movie "Tribes," in which he portrayed a young man caught up in the Vietnam-era draft who refuses to submit to the rigid military way of life.

Nor is Vincent a stranger to military service itself. In 1967 he did six-months active duty in the National Guard, receiving basic training at Fort Ord, Calif. This taste of military-life, he admits, came in handy during the filming of "Tribes" and the many other military roles he&#39;s performed over the last 13 years.

"I tried to draw on it," he said. "&#39;Tribes&#39; was a little farfetched, but I guess you have to stick a little dramatic license in everything."

His military. background, however, extends beyond both. his service time and his military roles.

"I was born in Fitzsimons Army Hospital," he explained. "My father was in the service there &#8212; the Army Air Corps. During the war he was part of some unit in the Aleutians. They made maps and aerial photographs. He was discharged four days before I was born."

Maintains interest in the military

His interest in the military remains active. "I covered a &#39;Soldier of Fortune&#39; convention in Louisiana last year for Oui magazine. I went out to this thing, and got talked into going through their jump school. There was a group of guys &#8212; a splinter group of the Confederate Air Force &#8212; that put me through the harness training, and had me jumping off the back of a four-wheel drive Ford pickup at 35 miles per hour."

When the day arrived for the real thing, he said, "they got us all lined up, marched us to the plane &#8212; they had two bagpipers and a drummer playing &#39;The Ballad of the Green Beret&#39;s &#8212; and got pictures of me going out the end of that plane." When it was all over they gave him a purple beret.

Vincent&#39;s journey from Fort Ord trainee to Hollywood actor began before his stint in the service.

"Just before I had to go on active duty, I was in Mexico working for my father painting signs and doing silkscreen work. I met a man there from Beverly Hills who had contracted a big silkscreen job for sonic gas stations. He suggested to my father that I might meet an agent he knew."

He met the agent, was advised to "watch a lot of movies" during his service time, and found himself with a job when he got out.

That commitment carried the Ventura, Calif., resident through roles in "Baby Blue Marine", "Buster and Billie", "The World&#39;s Greatest Athlete" and "Hooper." After completing his last box office release, "Defiance," he heard that "Winds" was going into production.

"I had read the book, and instinctively felt I was right for the part. But it was quite an experience trying to convince the producers;" he said.

The role Vincent felt "right" for was Byron Henry, the 24-year-old son of Navy Captain "Pug" Henry. Pug is the Naval attache in pre-war Berlin, and has one son in Navy flight school, while Byron, the youngest, is traveling around Europe, studying part time.

"Briny," as his dad calls him, stops in Sienna, Italy, long enough to meet Natalie Jastrow (played by Ali MacGraw). The inevitable happens, and Briny finds himself following the strong-willed Natalie to Poland only hours before the German onslaught of Sept. 1, 1939.

After considerable risk to life and limb, he manages to get himself out of occupied Europe; but is forced to leave Natalie behind. Upon his return to the United States, Pug (played by veteran actor Robert Mitchum) convinces him to enroll for Naval submarine school...

By the time Pearl Harbor is attacked, Briny is an officer on the submarine Devilfish, ported out of Cavite NB, Philippines.

Though the story attempts to explain the immediate origins of World War II, and dramatizes the effects of Hitler&#39;s "New Order" on the European Jewish community, "it&#39;s not pointing a finger at anybody," Vincent says. "It&#39;s simply the story of a Navy family.

"I met a woman at a celebrity ski tournament not too long ago. She told me about her family. One uncle was a submariner, and one was a pilot. Her father had been a Naval attache, assigned to the diplomatic corps. She said when Wouk&#39;s books came out, they were immediately taken as the story of her family &#8212; that&#39;s. how close it was."

Much of the plot revolves around the tension between father and son. Mitchum&#39;s stern, disciplined Pug Henry sees son Byron as an irresponsible, immature child, intent on having his own way.

"I think, in a way, it&#39;s a classic father and son relationship &#8212; a strong-headed youth and someone who&#39;s been there and seen it all," Vincent says. "I remember in 1968, when they were covering the Chicago riots on television, and I got all fired up. &#39;This can&#39;t be,&#39; I said. My dad just sat there, and finally said &#39;All this talk ... You want to go out and make things right. You&#39;re going to find yourself thinking differently in a few years. You make a mistake now, and you can find yourself in jail, a martyr for something you never really believed in in the first place.&#39; He really made an impression on me.

"Young people are always especially strong-headed. What you used to think so idealistic at one time is not at all what you thought it was."

Some of the old Vincent idealism may still be left, but it&#39;s been tempered through the years. "I see so many things wrong with people in power, that I find it difficult to take sides. But I don&#39;t think I&#39;ve been narrowed to one brand of thinking."

Though he admittedly steers clear of politics, Vincent tries to keep informed, and reacts to what he sees.

"I guess you can just call me a survivor."