From the S&S archives: 'It's all about money' 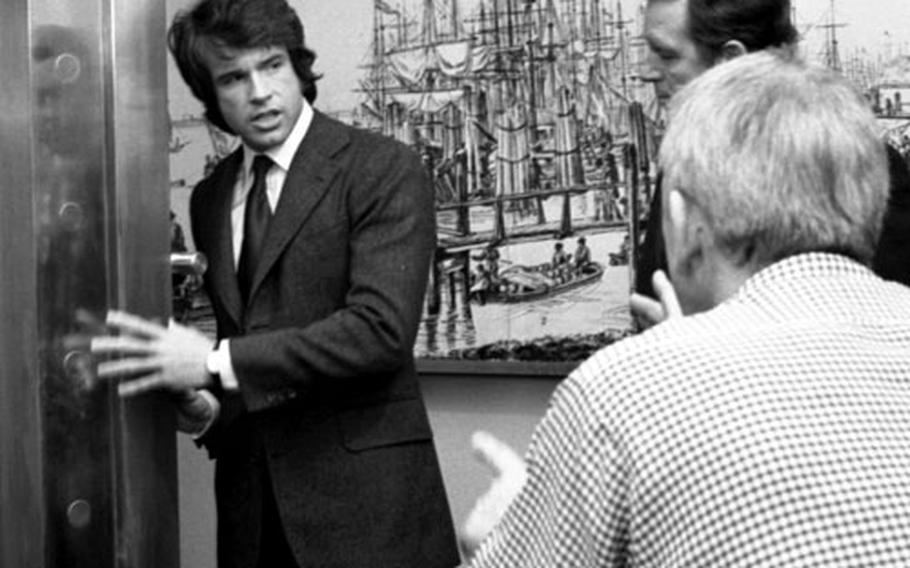 Warren Beatty discusses the next shot with the crew. (Ted Rohde / ©S&S)

Warren Beatty discusses the next shot with the crew. (Ted Rohde / ©S&S) Warren Beatty talks with Gert Frobe, right — best known for his portrayal of the James Bond villain Auric Goldfinger — on the set of "$" in Hamburg, Germany, in 1971. (Ted Rohde / ©S&S) 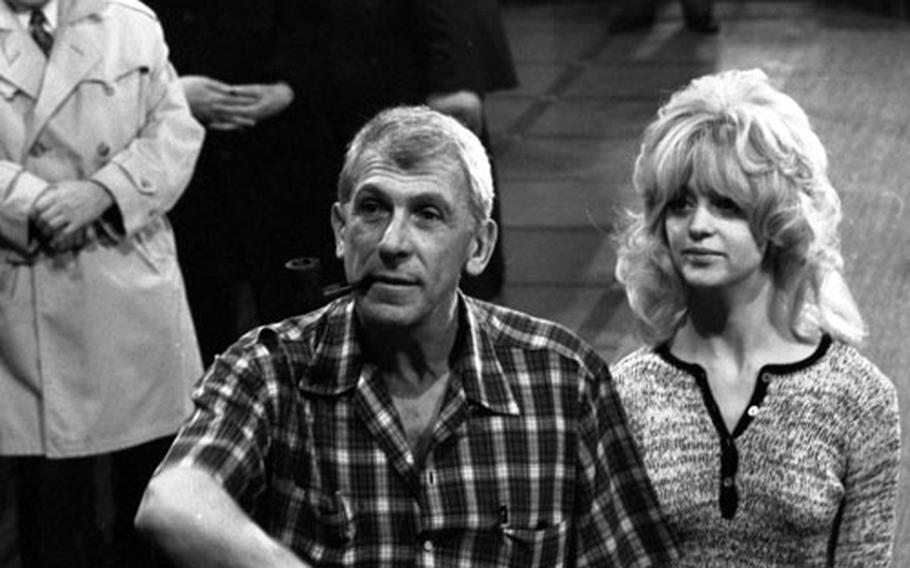 Goldie Hawn and an extra listen in as director Richard Brooks gives instructions on the set of "$." (Ted Rohde / ©S&S) 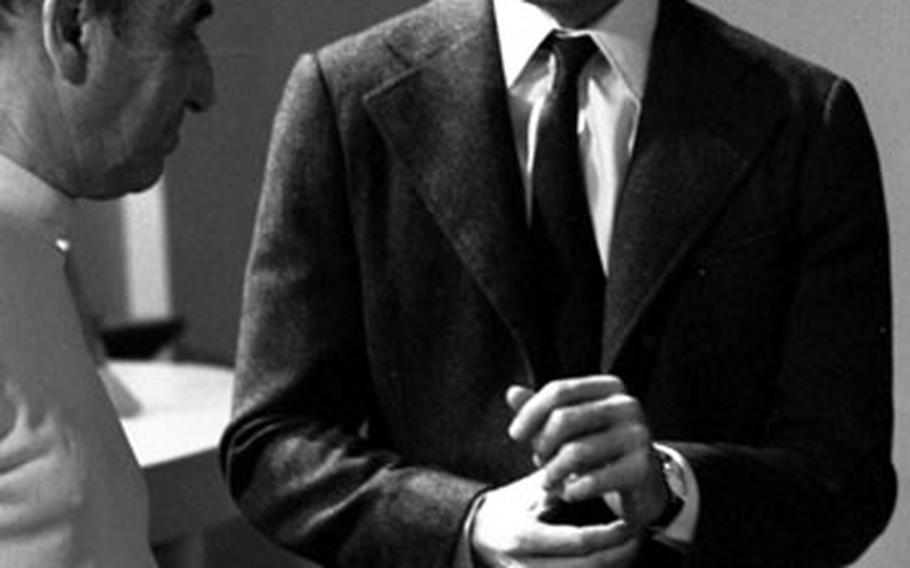 Warren Beatty waits for the next scene. (Ted Rohde / ©S&S)

And that&#39;s all veteran director Richard-Brooks would reveal about the plot of his new picture "$."

The American movie is being shot in Germany. During a recent visit to the set by a Stars and Stripes team, shooting took place in Hamburg&#39;s art museum.

Inside, Columbia Pictures had built a bank interior for the "United World Bank."

Chief publicist Al Horwits says the Mike Frankovich production has a shooting schedule of 82 working days and a budget of more than $3 million. Shooting began Jan. 11.

But what it&#39;s all about is a secret as closely guarded as any military plan in the Pentagon. When asked about footage already shot, both actors and crew clam up.

BROOKS, who wrote the screenplay, says only one or two people are aware of the story line &#8212; and he prefers to keep it that way.

He doles out pages from the script to his actors day-by-day. This much was apparent: It involves a bank, a robbery and a spectacular chase sequence to be filmed later in Bavaria.

Top-billed in the action-melodrama are Warren Beatty, Goldie Hawn and Robert Webber. But the director says no one knows the ending "because I haven&#39;t written it yet!"

Also featured are Gert Frobe, who will be remembered as "Goldfinger," Scott Brady, a fan favorite of the 50s, and Robert Stiles, ex-UCLA football hero.

Tough taskmaster Brooks, an ex-Marine, has guided such stalwarts as Bette Davis, Cary Grant and Liz Taylor through their paces. His screen credits include "Blackboard Jungle," "Elmer Gantry" and "Cat on a Hot Tin Roof."

IS IT easier to direct newcomers?

"Most often that&#39;s true," he replied, "but not always. There are some pros who are just fantastic to work with."

Brooks was in Germany a year ago to scout locations for "$" when he spotted some fantastic camera work on a local TV show. Impressed, he hired Petrus Schloemp to shoot his present project. It is the young cameraman&#39;s first major movie job.

The director is also enthused over Brady&#39;s role in the film. The burly actor hasn&#39;t starred in movies in recent years, although he continues to appear in lesser roles.

"His part is going to be very good," says Brooks, puffing on his ever-present pipe. "He&#39;s an Army man who has been in service many years and suddenly finds ways to come across some money."

Staring thoughtfully into space, the greying filmmaker took a long pull on his pipe, then slowly exhaled. He continued, "Brady is a very talented man ... a real pro."

Warren Beatty enters. Mostly he keeps to himself as he awaits his cue.

Although he has a slight cold, the tall, slender actor moves knowingly and delivers his lines letter-perfect, requiring few retakes.

His presence attests to the respect he has for the director and producer. Though much in demand during his decade in movies, Beatty remains very choosy in his selection of films.

Brightening the set whenever she appears, Goldie listens intently to direction and seems anxious to please. She received the Academy Award last year for her first movie role in "Cactus Flower."

Her three films have all been for producer Frankovich.

Awaiting their call on the sidelines, bachelors Brady, Stiles and Webber discuss politics, sex, sports, anything but movies. Brady is a big Notre Dame fan, while Stiles was a defensive halfback on the winning side in the 1966 Rose Bowl game when UCLA beat Michigan State.

Whenever a question arises about sports, ex-sportswriter-editor Horwits is summoned to settle it.

"I&#39;m the walking sports encyclopedia around here," he growls, obviously enjoying it.

ASSISTANT director Tom Shaw pointed out that the crew tries to do between 16 and 20 setups daily. "Each move is a setup. With these lights and cameras, labor costs can really mount up."

Brooks also has a German assistant who repeats all the director&#39;s orders in Deutsch.

For a scene, Beatty enters the bank, walks across the set, climbs a few stairs, unlocks a door and enters. It goes smoothly. Brooks is happy.

Another scene has the star passing Miss Hawn in the bank&#39;s lobby while extras mill about. This shot requires only a few retakes but the director frowns.

The camera turns on Beatty and Frobe as they lead a group of bankers (extras) into the bank&#39;s basement to a specially constructed vault. Several retakes are required, mostly because of extras&#39; missing their cues.

"Dammit, move or get to hell out of the shot," Brooks yells. His assistant parrots the remark in German. The director is obviously not pleased and the presence of Frankovich may also be unnerving.

Frankovich has just arrived in Hamburg from Hollywood, where he completed another film, "The Love Machine."

The crew does a practice shot.

"There are times when we shoot a scene in one take," explained Horwits, "But if it&#39;s a vital shot, Richard will insist on two shots, as protection."

PRIOR to shooting, Brooks scans the set to see if any coffee cups are in camera range, then barks out the order to film.

While the scene progresses, Brooks silently mouths the lines in unison with the actors. He appears to know the script by heart.

Beatty stops the action and gingerly suggests a change, "You&#39;d like me to start the hand higher wouldn&#39;t you?" he asks Brooks.

Brooks pauses, then muses, "Yes, I think so."

Frankovich leans against a counter out of camera range, watching the action. The take is good. Now Beatty spots the silver-haired producer.