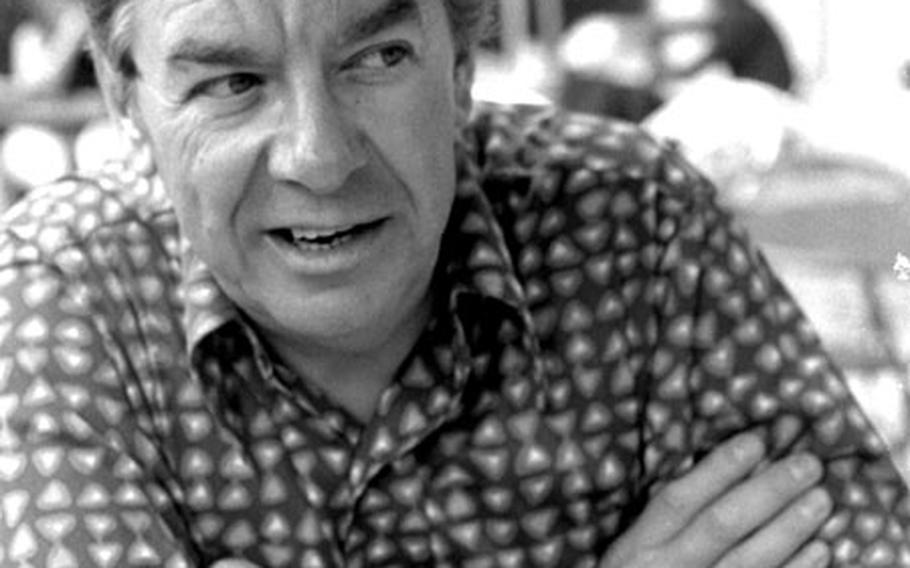 "Do you remember Dilly Daily?" screamed the emcee.

"Yeah!" resounded the members of the audience

"Yeah!" It was a roar. There were whistles and cowboy yells.

"Well if you do," shouted back the crowd-warmer, "here is the Howdy Doody Revival Show."

The huge aircraft hangar at the 18th Aviation Battalion at Fliegerhorst Casern in Hanau, Germany, had been transformed into a theater. The lights dimmed, and up on stage, projected onto a huge sheet hung for the occasion, was the 10th anniversary Howdy Doody Show of 1957, a part of what some TV critics have dubbed "the greatest children&#39;s TV show of all time."

Suddenly, you were no longer at the Hanau hanger, but traveling down a nostalgic corridor leading to a living-room floor in front of a TV set 15 years ago. If you are now 25, you magically became 10 years old. If you are 20, you became five. In any case, you were a child again, lying on the family carpet eating a Hostess Twinkie with cream-filled center, or a sandwich made of "wholesome" Wonder Bread and drinking Ovaltine from a Howdy Doody Mug &#8212; products of early sponsors.

On the screen was Big Chief Thunder Thud getting a face full of whipped cream from Pierre the Chef, both notable characters on the show. Clarabell was honking his "yes" and "no" horns with glee at the sight of the creamed Indian.

You were a kid again.

Then, the film ended and you saw that your children had sat through it much as you did 15 years ago &#8212; entranced at the marionette figures of Mr. Bluster, Tillie the Dino and the freckle-faced, wide-mouthed Howdy.

The emcee stepped back on stage.

And there he was. The same yellow-and-red-fringed buffalo scout&#39;s outfit with the bison on the back and that thick buffalo-nickel belt around a slightly bigger middle than you remember from 1957. But there was no mistaking the wide grin. And as soon as he stepped up to the mike and asked that familiar question &#8212; "Hey kids, what time is it!" &#8212; there was little doubt what your reply should be.

In unison the crowd in the hangar belted out the phrase that had rung out on nationwide TV for 13 years: "It&#39;s Howdy Doody Time!"

Buffalo Bob Smith is on a 31-day tour of USAREUR caserns for the USO after having successfully presented the two-hour revival show at more than 75 Stateside college campuses.

His itinerary will include: Nord Bayern support district, May 13 to 18; Sued Bayern, May 19 to 21; BadenWuerttemberg, May 22 to 26, and Rhineland-Pfalz support district from May 27 to 30.

But why the Howdy Doody Revival Show?

Buffalo Bob told the Stars and Stripes in an interview that the revival was planned "to relive our carefree childhood days before war and pot."

He said he was first approached in January of 1970 by the student activities group of the University of Pennsylvania to do a show.

"I wasn&#39;t sure if they were on the level but I went ahead and got together some old Doodyville films. With the help of friends from NBC and others in Ft. Lauderdale (where Smith lives most of the year), I put together an act," he said.

He explained that he has gotten tremendous response from his old "Peanut Gallery" fans wherever he has appeared.

"The kids really flip their minds when they see the old advertisements on the film," said Smith. "I get the best receptions I have ever had in show business`."

According to Mrs. Mildred Smith, her husband&#39;s "right-hand man" for 32 years, "the walls bulge with applause and there have even been cases where girls in the audience have been crying."

Howdy Doody alumni from West Point to Berkeley have been filling the theaters and gymnasiums, giving their one-time childhood idol a repeat of the adulation they gave him during the show&#39;s run from 1947 to 1960. At the show&#39;s peak in the mid-50&#39;s, its coast-to-coast audience averaged between 12 and 15 million daily and placed it among the top 10 nationally rated shows, according to the Associated Press.

Smith&#39;s new traveling show has been updated for his now older Peanuts. One gag he pulls is to hit a sour note on the piano and then reach inside to find marijuana cigarette papers plugging the strings. He lays blame for the concealed papers on a prominent local official, be he dean or general, and gets laughs from the audience. He then asks about his piano, "Is this a Steinway or a Stoneway?"

The rest of the show is made up of sing-along tunes, some of a ribald nature. Others are old standards from the show.

Smith told Stripes that one-time fans now can tell their kids that Howdy Doody may be back on the air this fall or next spring.

"We&#39;re negotiating now to do the show again," said the 54-year-old entertainer, who will continue the role he made famous.

In light of this, Smith had some remarks about children&#39;s programming today and the topic of violence in TV land.

"I don&#39;t like the use of the word `violence&#39;, he said. "But Variety and the FCC already have used it. There are definite trends towards this type of children&#39;s programming."

"The thing about Howdy Doody was that it was a fantasy success," explained Smith. "It had great parental approval. There were no guns and shooting. Of course, Clarabell&#39;s comeuppance came from doing mischievous tricks," he said.

"Clarabell would get a mild scolding and token tap on his horn box.

"We never took a client that had a product that was detrimental to a child&#39;s health. We had no $39.50 toy ads or ads for carbonated beverages," said Smith.

"Or bubble gum ads," piped in his wife.

"The networks are taking the easy way out these days," said Smith. "There is no more live entertainment and there are a lot of those animated cartoons."

Smith told how the show&#39;s writers were always aware of the effect it had on children.

"Way back in the 50s we were singing songs like: `Never Ever Pick a Fight, Because No One Is Ever Right.&#39;

"We also had a song about crossing the street with your eyes," said Smith. "We delivered that song to 15 million kids a day with hopes we were going to save a few lives in the process."

Another ditty they sang on the show that is relevant to today&#39;s social picture dealt with facial coloring. It went

"My face may not be handsome; it may be dark or fair; but here in America you&#39;re welcome; everybody&#39;s welcome everywhere."

The magic that was tried back in television&#39;s infancy to combat racial strife may not have been successful then, but the old film shown at Hanau proved that kids still love the squeaky-voiced Dilly Dally and the antics of Clarabell the Clown and the fatherly Buffalo Bob Smith.

One little girl, no older than 7, and who sat entranced through the film, went up to Smith before he was to go on. She looked at him and probably recognizing the outfit she had just seen on the screen, asked with a surprised tone of voice: "Are you Buffalo Bob?"

"I sure am, sweetie," beamed Smith.

The girl opened her arms for Smith to pick her up and plant a big kiss on her cheek as her father snapped his camera.