From the S&S archives: From Turkey, no belly dancers Ed Sullivan and his wife, Sylvia, ride the shuttle bus at the Frankfurt airport in July, 1961. (Merle Hunter / ©S&S)

Ed Sullivan and his wife, Sylvia, ride the shuttle bus at the Frankfurt airport in July, 1961. (Merle Hunter / ©S&S) 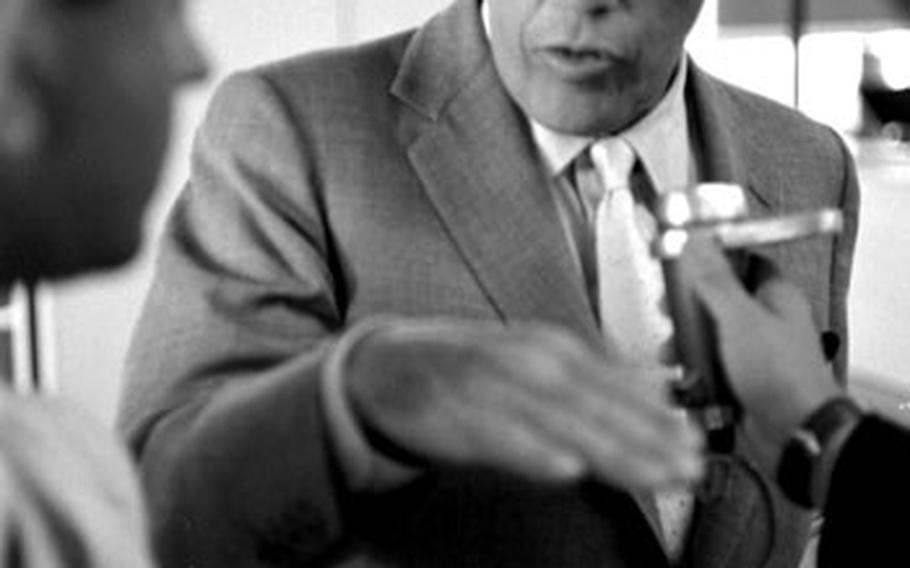 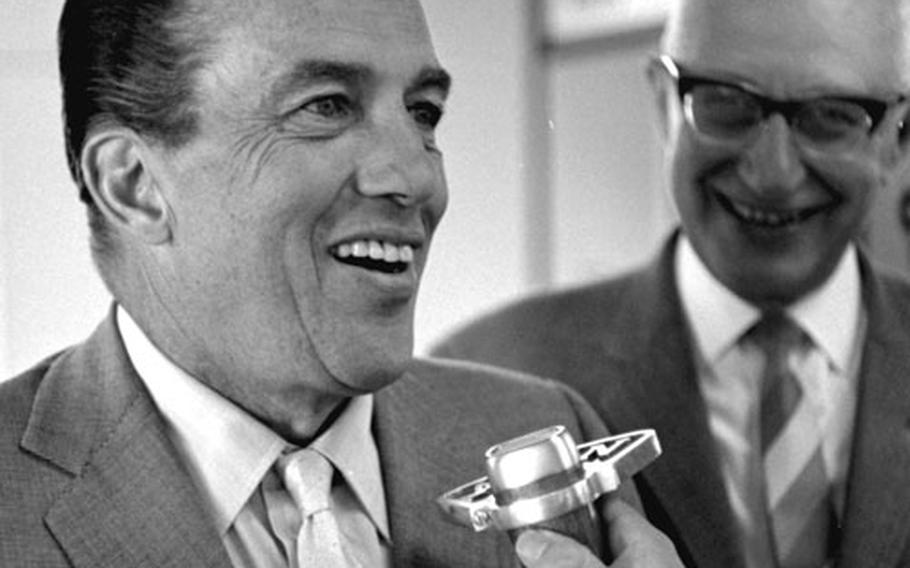 Ed Sullivan jokes with an interviewer at the Frankfurt airport. (Merle Hunter / ©S&S)

FRANKFURT &#8212; Ed Sullivan, the poker-faced TV impresario whose coast-to-coast show has pioneered in the use of European talent, stopped here en route to Berlin from Istanbul &#8212; where he did not get a belly dance act for his show.

"Are you kidding," smiled the man who usually doesn&#39;t. "Maybe belly dancing has become popular in New York night clubs but they&#39;d throw you out of the big leagues if you used it on TV. Something about costumes," he explained.

Accompanied by his wife, Sylvia, Sullivan is on his annual trip around the world seeking talent for his show.

"There are so many TV shows and so many performers used over and over again in the U.S. that you&#39;ve got to get something different to keep up with the competition," Sullivan said.

A big trouble in the entertainment world, of course, is that everybody tries to mimic the American style, the ex-New York newspaperman explained.

"If they only kept to their own national characteristics they would stand a wonderful chance of making it in the U.S.A.," Sullivan said. To illustrate his point, he announced that he picked up a seven-man Turkish dance group in Istanbul which he has filmed for a New York appearance.

"They&#39;re strictly a folklore dancing group. You&#39;ve never seen anything like it anywhere in the world &#8212; except Turkey, and that&#39;s why I picked them," Sullivan explained.

The Sullivans&#39; six-week tour of the world has taken them through Tokyo, Hong Kong and Turkey. From Berlin they are going to Munich, Rome, London, Paris and home.

The Ed Sullivan show has always used the winners of the annual worldwide Army talent show. However, he soon expects to have a group of talented servicemen from the Army, Navy and the Air Force.

Sullivan went into TV 13 years ago, although he continued his daily newspaper column and his regular radio show.

Mrs. Sullivan, who has always traveled with her husband, described her current trip as "a very pleasant schedule. I take care of. passports, plane tickets and all those other little things, while Ed keeps an eye on the talent."