From the S&S archives: For Fats Domino, it's salad and pickles now 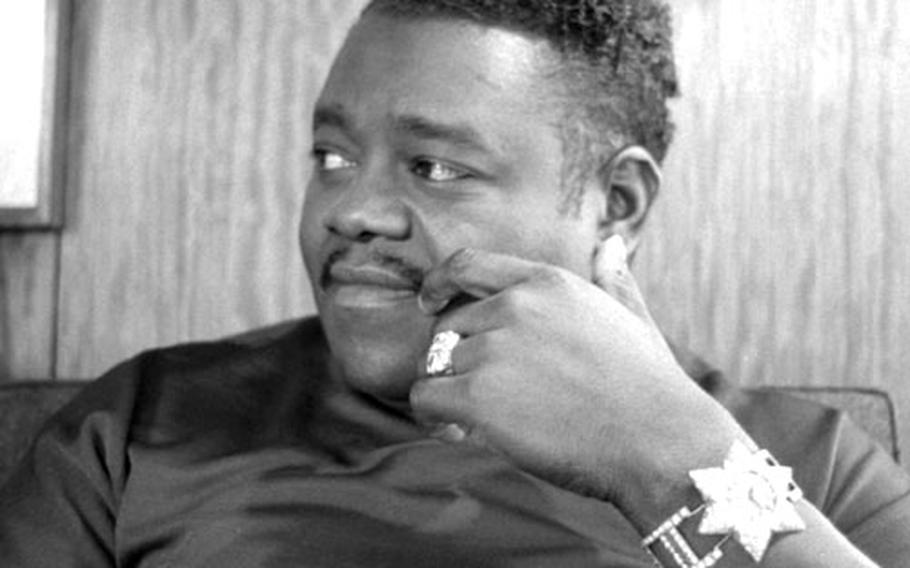 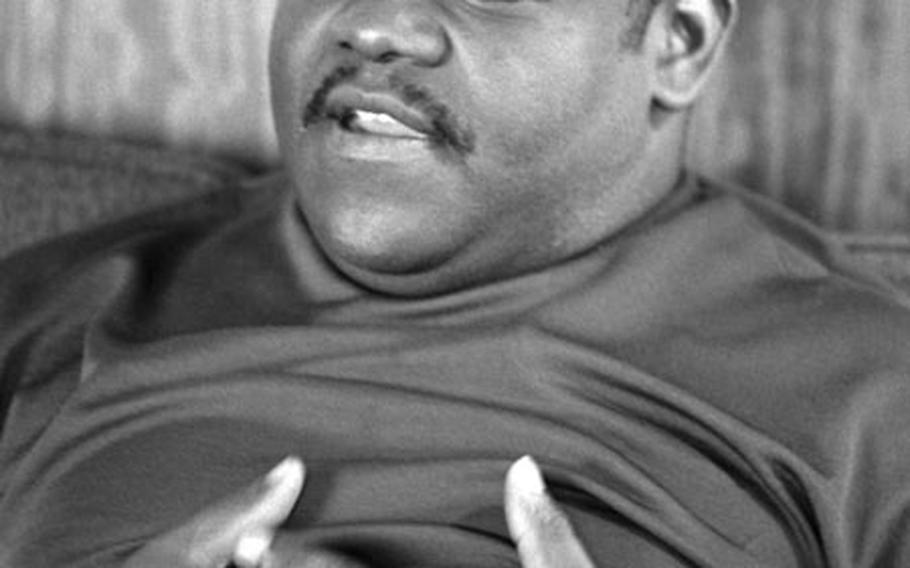 Rock and roll great Fats Domino, during an interview in his Frankfurt, Germany, hotel room in April, 1967. (Bob Milnes / ©S&S)

FRANKFURT, April 7 &#8212; A dill pickle diet may louse up one of the biggest names in show business. Fats Domino has dropped 25 pounds with it.

"I&#39;d rather be a live Antoine than a dead Fats," said the New Orleans rhythm-and-blues king whose real name is Antoine Domineau Jr. He said his blood pressure shot up too high and his doctor ordered him to shape up or face serious consequences.

"I stopped eating all the things I used to eat, and now I eat salads and dill pickles," he said. "I always like the taste of something sour."

Fats has trimmed the weight of his short frame from 220 to 195 in the last few weeks. He looked more poly than roly as he took a breather in a hotel suite here between appearances at officer, NCO and enlisted clubs. His lightning tour of of Germany ends Sunday night and he will fly from London Monday to meet New York bookings.

Saturday Fats will make four appearances beginning with a 3 p.m. performance in the gymnasium at Ramstein Air Base, and including night performances at Hahn Air Base airmen&#39;s, NCO and officers clubs. Sunday night he goes to the Wiesbaden Rocket Club and Frankfurt Topper Club.

"This is only my second time in Europe and the first time in Frankfurt," he said. "I want to get over here often because New Orleans music is riding a wave of popularity here now."

Eighteen gold record awards, each for a disk that sold a million copies,. have come his way since the 39-year-old Fats got his start. His biggest platter, of course, was "Blueberry Hill" which went five million. Is there anyone who doesn&#39;t recall the way he bounces that one off the keyboard and sings in a gravelly voice?

"I have to do that one on every program, and sometimes they make me do it two or three times," he said.

Fats wears a giant star-shaped watch studded with 362 diamonds on his wrist and it&#39;s the first thing that dazzles a visitor.

"I had it made down in Texas where they think big," he said. "Trouble is all the photographers are usually more interested in the watch than in me."

Fats then flashed his best smile, which is dazzling in itself. He loves jewels and carries $40,000 worth around.

"Ricky Nelson sang my song, `I&#39;m Walking,&#39; and that one sold over a million. I&#39;ve got a lot of new songs to record and think there are seven or eight real good ones coming up."

Fats takes a nine-man band with him, including two men who have worked with him since he began recording 20 years ago &#8212; Robert Higgins on tenor sax and Herbert Hardesty on trumpet and tenor sax.

"They&#39;re all from New Orleans," he said with noticeable pride. "I live there with my wife and eight children in a house near the French Quarter that is only three blocks from where I was born.

"The oldest of the four boys is pretty good on drums, guitar and piano and may be recording soon. That&#39;s Antoine III. He&#39;s 16 and still in school, but he&#39;s getting started in music just like I did, learning from his Dad. My Dad, who was the first Antoine, played violin and died when he was 86."

Fats said death has taken many old jazzmen who gave New Orleans its reputation for music, but he thinks new ones coming on are just as good.