From the S&S archives: Elton John goes for talent, not flash 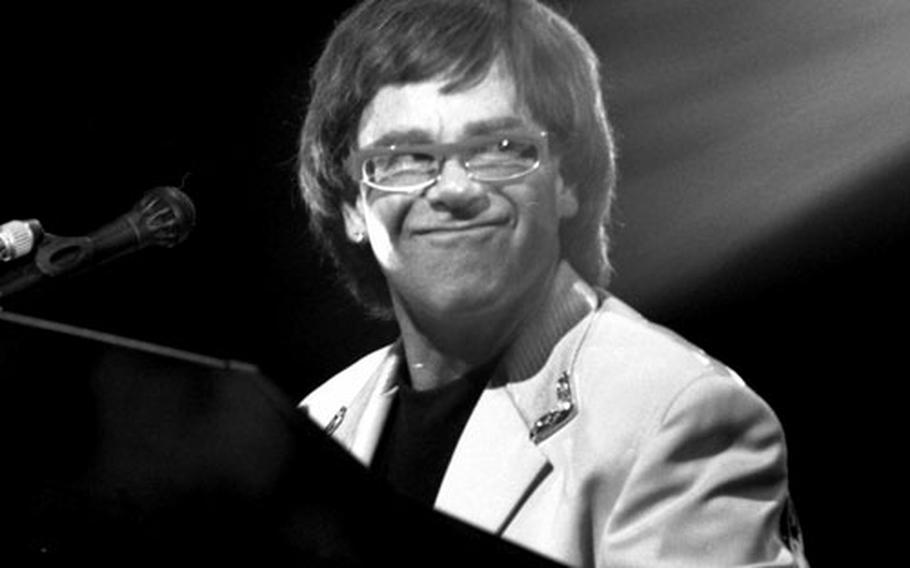 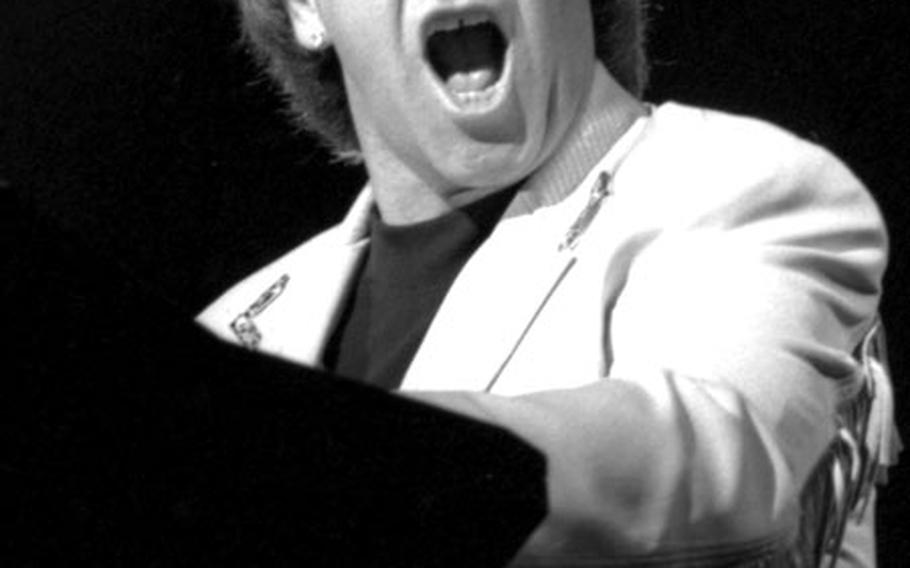 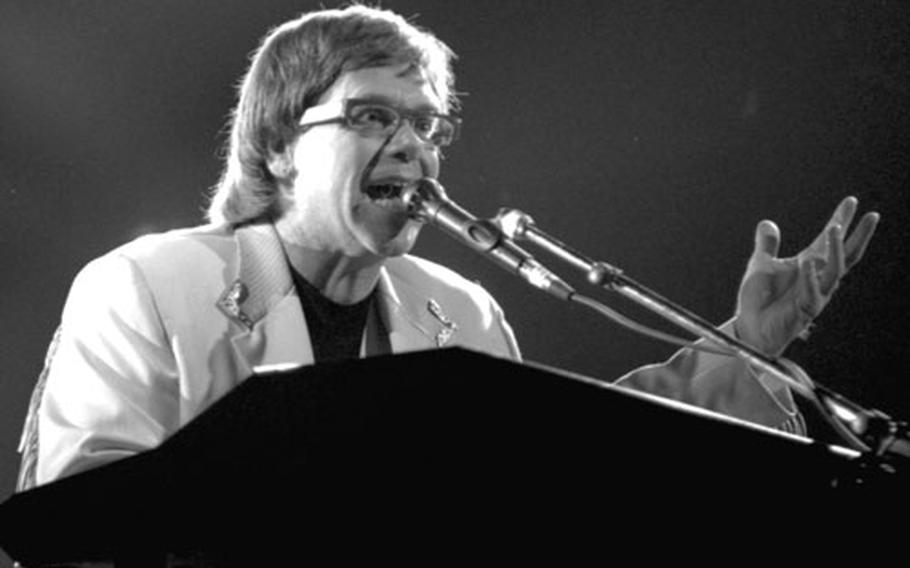 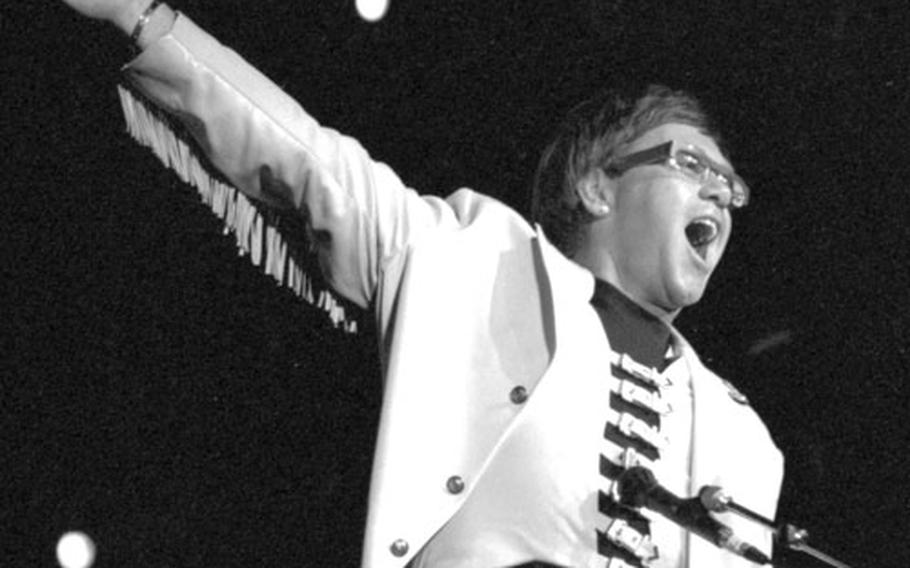 Elton John returned to the Festhalle in Frankfurt, Germany, last week in a flourish, winning over the capacity crowd with an energetic performance covering many of his popular hit songs.

The 45-year-old British rocker, once known for his frenetic performances, spent most of the concert seated safely at those keys. At one point, when he did leap from his portable, hydraulic stage down to the main stage about three feet down, it was a wonder that a safety net was not in place. John is nimble at the keyboards, but not necessarily on his feet.

John wasn&#39;t the only one who stayed planted throughout the concert; not even the backup singers made any dancing moves beyond their microphones.

Instead of offering the potpourri of sideline entertainment with dancers, an extravagant light show, a three-story video screen and other featured singers that many performers employ, John&#39;s concert focused exclusively on his music, which spans a career that produced its first U.S. hit in 1970.

The concert did include a laser show, which delighted the audience, but it was used sparingly. The real entertainment was the bespectacled man under the spotlight.

Between songs, John displayed his most athletic moves as he graciously bowed and waved to the loudly cheering audience. He seemed to sincerely appreciate the devotion &#8212; midway through the concert, he shook his fist confidently and swung his arms in a call for more applause.

Unlike at many concerts, even those in which featured backup singers take center stage to spell the main performer, John&#39;s performance never stalled. He changed clothes twice, but in neither case did more than two minutes pass before he bounded back onstage and took the microphone.

The largely German audience in the sold-out hall was with John when he performed his second song, the 1983 hit I&#39;m Still Standing. By his fifth number, Philadelphia Freedom, the crowd &#8212; still standing -was clapping its hands overhead in unison.

He sang two songs from his latest album, The One, including Simple Life and The Last Song.

Although many of John&#39;s biggest hits have been ballads &#8212; Candle in the Wind, Norma Jean, Blue Eyes, I Guess That&#39;s Why They Call It the Blues, Levon, Daniel, and Someone Saved My Life Tonight are just a few examples from his illustrious career &#8212; John can rock without the heavy-metal sound on such hits as Bennie and the Jets, Crocodile Rock and Saturday Night&#39;s Alright for Fighting.

Throughout the concert, John&#39;s playing and singing were impeccable.

John occasionally spoke to the audience, and he turned the lead vocals over to them late in the concert when they basically became his backup singers during Rocket Man. He sang the lead while the audience accompanied him with-the chorus "I think it&#39;s going to be a long, long time" over and over again.

In the previous song, John and a backup singer sang a masterful duet in a gospel version of Sad Songs &#8212; so well that that song may have drawn the loudest applause of the night.

John also took time to pay tribute to his buddy, Freddie Mercury, the lead singer for Queen who died in November of AIDS. John, bouncing around onstage more than usual, sang The Show Must Go On.

A few songs later, John, with the crowd eating out of his hand, cupped his palm behind his ear as he sang Bennie and the Jets. The crowd, joining in, did not disappoint him. John&#39;s hydraulic mini-stage lifted him about 15 feet high, spinning him slowly around, as he drifted into a lengthy, melodic keyboard solo.

After a short break, John came out to play a solitary encore in tribute to Marilyn Monroe in the poignant Candle in the Wind.

The number of John&#39;s hits run into the 40s, and there was no way he could play them all without extending the concert another hour or two. Among his missing tunes were Nikita, Blue Eyes, Don&#39;t Go Breaking My Heart, Little Jeannie, Island Girl and The Bitch Is Back.

But with the lineup of songs he did perform, it was impossible to leave the hall unhappy.

In years past, critics have called Elton John lazy in concert; on this evening, no criticism could be heard at the Festhalle, where the loudest noise of all was the constant cheering of the crowd.