From the S&S archives: East All-Stars prove a point 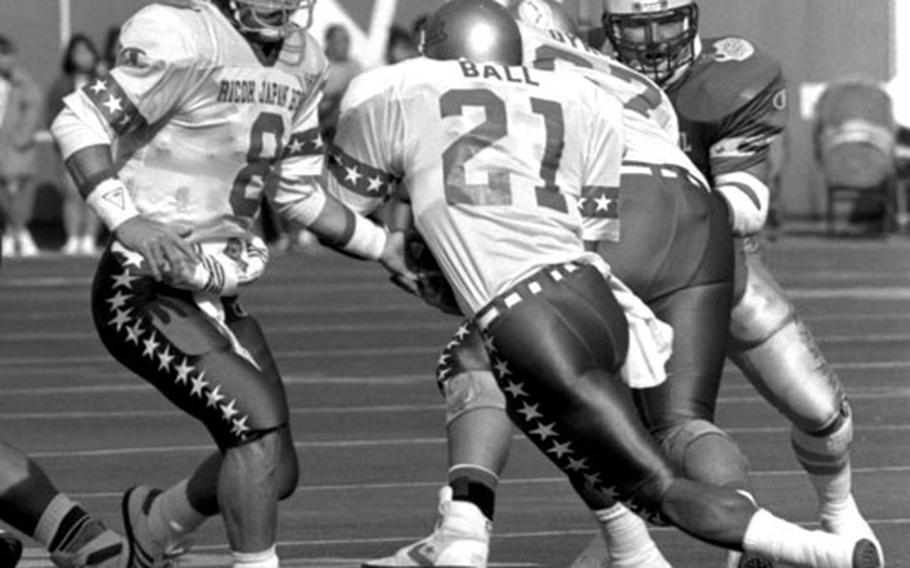 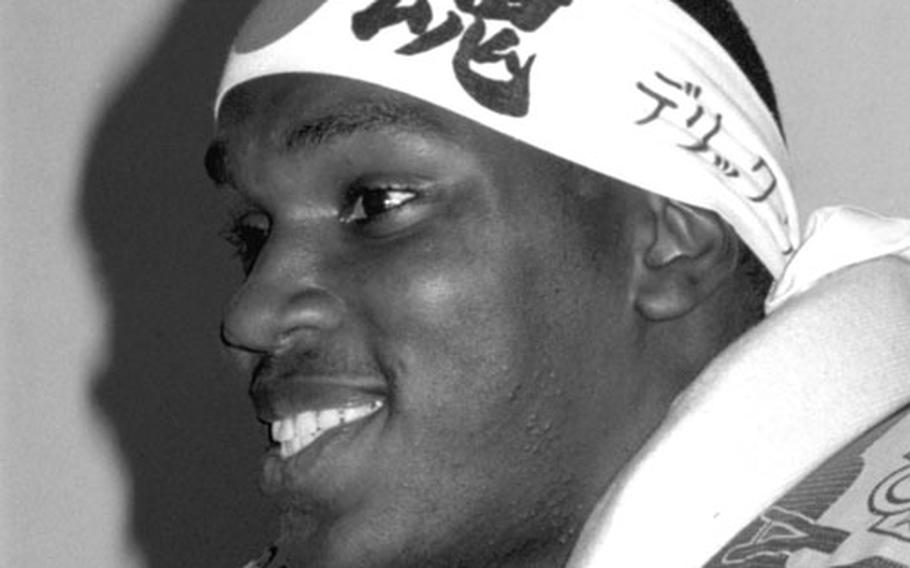 Alabama linebacker Derrick Thomas talks to reporters after his team&#39;s 30-7 win. Thomas went on to play 11 seasons with the Kansas City Chiefs, recording 127.5 sacks (including seven in a single game), before his death in February, 2000. (Dennis Rogers / ©Stars and Stripes) 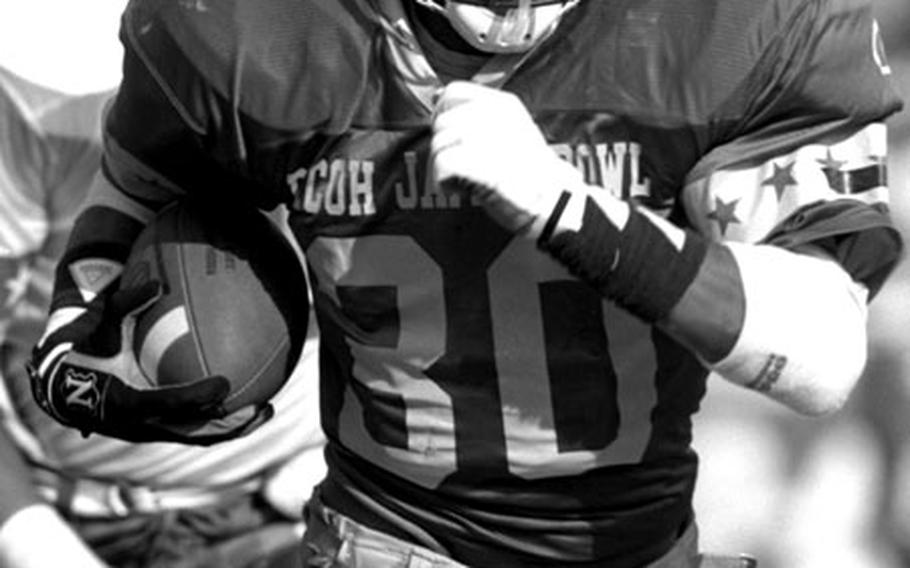 Syracuse&#39;s Robert Drummond, the game&#39;s MVP, carries the ball for some of his 66 yards (on eight carries, with two TDs). (Dennis Rogers / ©Stars and Stripes) 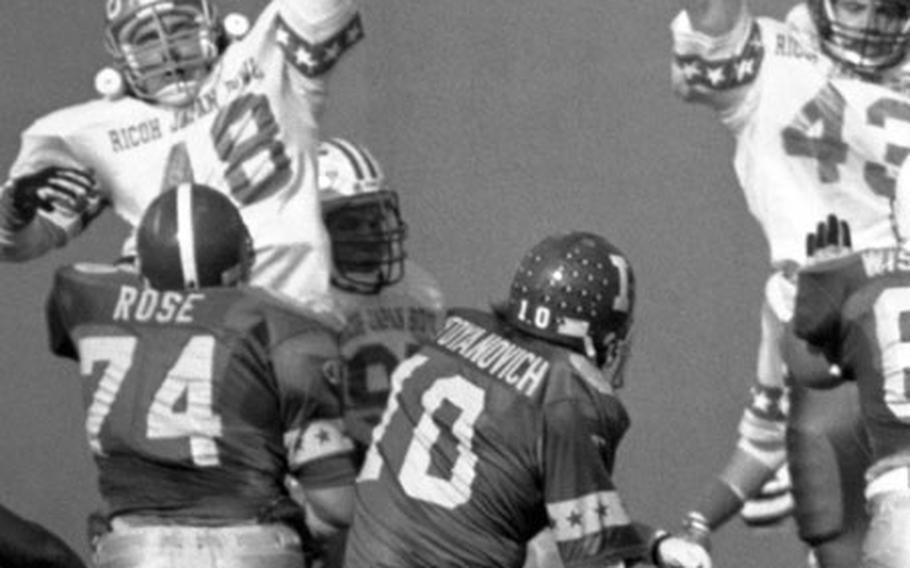 Indiana&#39;s Pete Stoyanovich lifts one of his three field goals over the outstretched arms of West defenders Doug Kline (48) and Don Deluzio (43). Stoyanovich played 13 seasons in the NFL with Miami, Kansas City and the Rams, converting 272 of 342 field goal attempts. (Dennis Rogers / ©Stars and Stripes) 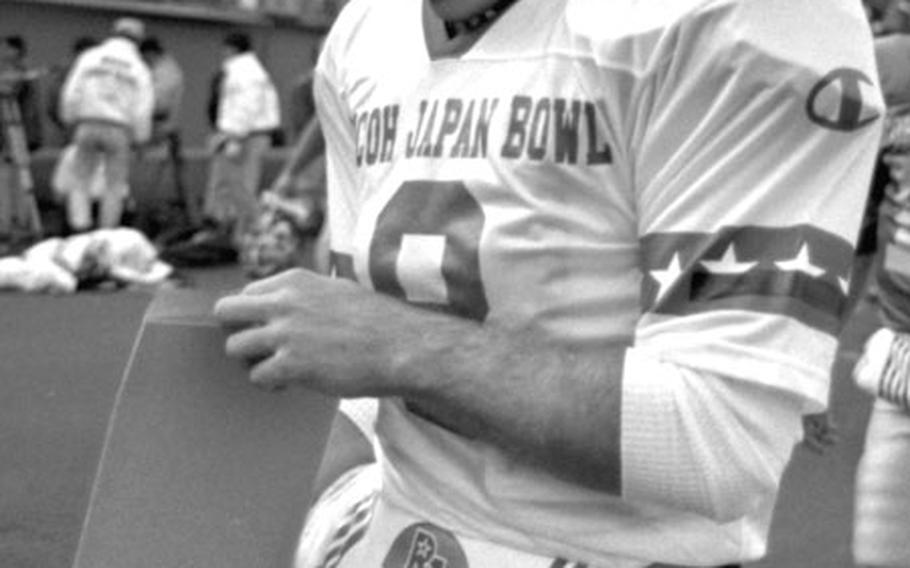 Troy Aikman leaves the field after the Japan Bowl, on his way to a Hall of Fame career with the Dallas Cowboys. (Dennis Rogers / ©Stars and Stripes)

YOKOHAMA, Japan &#8212; Alabama Crimson Tide linebacker Derrick Thomas wants to prove that college football in the East is just as powerful as in the West.

Thomas kept that in the back of his mind as he and his East All-Star teammates pummeled the West 30-7 in the Ricoh-Japan Bowl before 29,000 fans at Yokohama Stadium on Monday.

It was only the East&#39;s fourth victory in 14 Japan Bowls.

"THE WEST has a sense of arrogance about them that they just dominate football and we set out on a quest to prove them wrong. Of the four East-West All-Star games that have been played this year, the East has won all four.

"We just set out on a quest to prove history, at least in this game, wrong."

The East did that and more, holding the West to 139 total yards, including a mere 45 rushing. The East All-Stars totaled 380 yards, 228 on the ground.

"The East dominated in every phase of the football game," said West Coach Hayden Fry of Iowa. "We certainly saw American football at its best. The amazing thing to me, since we were limited in what we could do from a defensive standpoint, was that Troy Aikman and Chuck Hartlieb didn&#39;t have time to throw the ball throughout the game.

"They were just harassed by the pass rush. This requires superior athletes to do that. Derrick Thomas and Mark Messner displayed the great quickness and agility to run past our pass blocking."

Drummond, named the game&#39;s offensive Most Valuable Player, scored on runs of 41 and 1 yards and led all rushers with 66 yards on eight carries.

Drummond opened the scoring with a 41-yard touchdown run on the game&#39;s first possession. He took the handoff up the middle, broke two tackles and sprinted the rest of the way untouched.

The West, however, answered quickly as UCLA Bruins quarterback Aikman completed four passes for 50 yards in leading the West on a 10-play 79-yard scoring drive.

Aikman&#39;s UCLA teammate running back Eric Ball capped the drive with a 2-yard run up the middle for the touchdown. Scott Slater of the Texas A&M Aggies added the extra point to tie the game 7-7.

While the West rotated between Aikman and Iowa Hawkeye Chuck Hartlieb at quarterback, with each playing a quarter, the East rotated among Dilweg, Bobby Joe McAllister of the Michigan State Spartans and Jeff Francis of the Tennessee Volunteers on each possession.

On the East&#39;s second possession, McAllister maneuvered his squad to the West 49-yard line before throwing an interception.

Aikman promptly gave the ball back to the East as the Auburn Tigers&#39; Shan Morris picked him off at the East 12 and returned it 49 yards to the West 39.

Francis, however, failed to capitalize on the good field position and the East had to settle for a Stoyanovich field goal.

TROUBLE WAS, holder Tom Waddle of the Boston College Eagles mishandled the snap and Stoyanovich picked up the loose ball and attempted to throw a pass. Bruins linebacker Doug Kline intercepted the errant throw, returning it to the West 49-yard line.

The East&#39;s two interceptions were its only turnovers of the game. Coach Bill Curry of the Crimson Tide said that his squad&#39;s lack of turnovers helped in the victory.

"We were able to maintain field position because of that and did not have to make long drives on offense," making it easier to score, Curry said. "As the game progressed the defense grew stronger and that was a tribute to all the defensive players."

The lack of a punting game was just another of the West&#39;s troubles. Neither squad brought a punter and Slater had to handle the duties for the West. His first punt, after the West failed to move the ball following Kline&#39;s pickoff, carried only 21 yards and the East took over at its 34-yard line.

Dilweg took over and made good on his second try at the East helm, leading the All-Stars to their second touchdown.

Mitchell, the NCAA&#39;s third leading receiver in 1988, went up among three West defenders and came down with the ball. He finished the game with six catches for 87 yards.

Three more plays carried to the 10 and on second and goal, Dilweg hit Anthony Brown of the West Virginia Mountaineers with a TD strike in the back of the end zone for a 14-7 lead.

While the East moved almost at will, the West struggled under the East&#39;s heavy pass rush.

Hartlieb opened the second quarter and on his two possessions the West gained two total yards. His second drive ended in an interception that set up the East&#39;s third touchdown.

"OUR QUARTERBACKS didn&#39;t have much of an offensive day," Fry said. "I think we had some people open. Our kicking game was poor, our pass protection was poor and the turnovers were all instrumental in the East team beating us."

The highly touted Aikman was just 5-for-10 passing for 54 yards and one interception. Hartlieb finished with five completions for 40 yards and two interceptions.

Miami, Fla., Hurricanes linebacker Rod Carter picked off Hartlieb&#39;s first interception at the West 35-yard line and returned it one yard. McAllister led the East on a six-play drive with Drummond scoring from the 1 for his second TD.

Stoyanovich closed out the firsthalf scoring with a 30-yard field to give the East a 24-7 lead.

Stoyanovich added two second half field goals, the first a 21-yarder and the second from 49 yards out and the East defense continued to put pressure on Aikman and Hartlieb.

Messner, of the Michigan Wolverines, was a big part of the East&#39;s pass rush and he earned the Joe Roth Trophy for his inspirational play in the game.