From the S&S archives:Crosby loves his life with family, golf and song 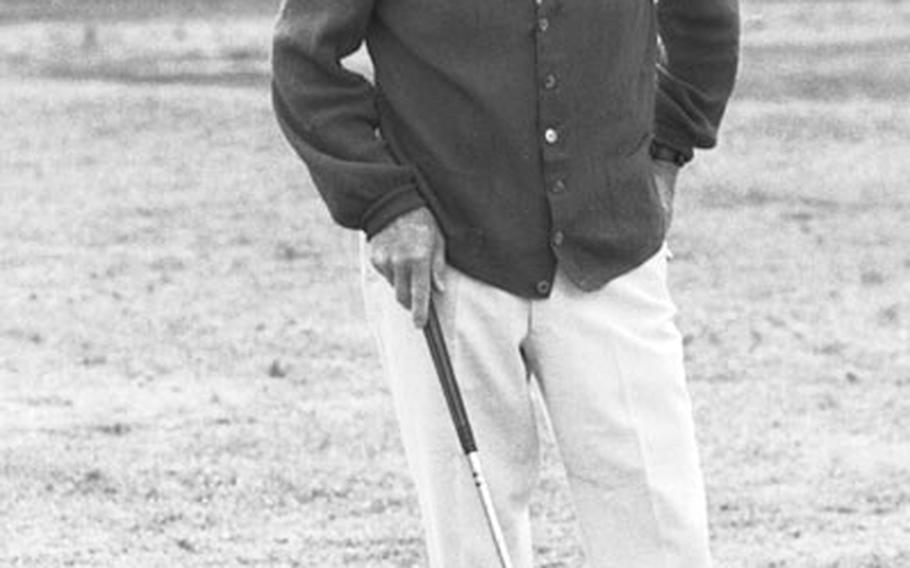 Bing Crosby on the driving range before pro-am for the 1976 German Open at Frankfurt. (Lloyd Perkins / ©S&S)

Bing Crosby on the driving range before pro-am for the 1976 German Open at Frankfurt. (Lloyd Perkins / ©S&S) 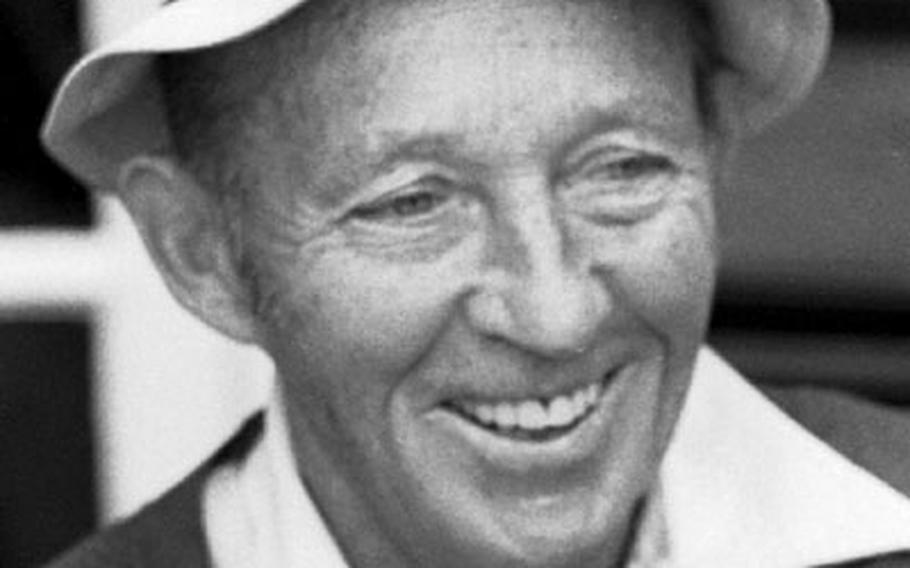 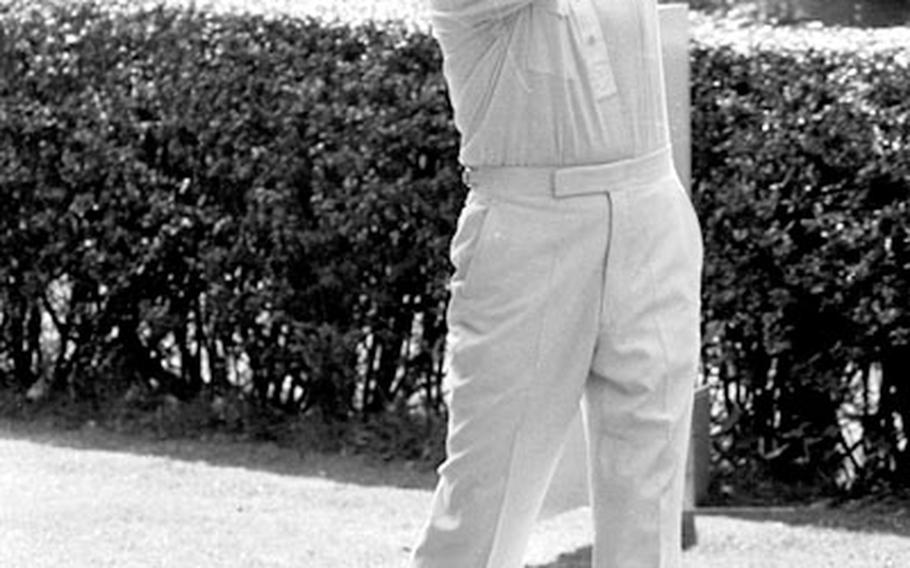 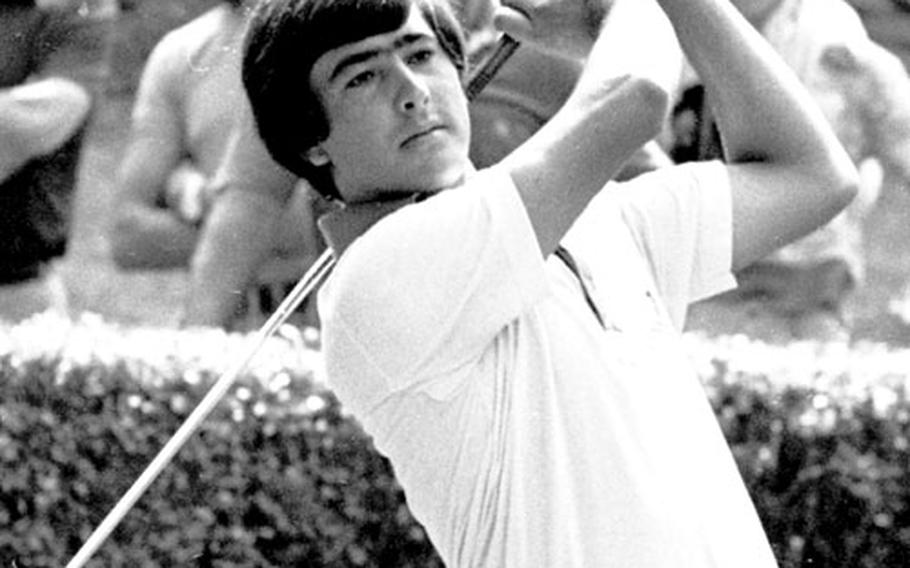 Teamed with Crosby&#39;s son, Harry, in the pro-am was young Seve Ballesteros, coming off a win in the Dutch Open. (Lloyd Perkins / ©S&S)

For, lo, these many years, Bing Crosby has been enjoying life. So, why should things have been different Tuesday morning at Frankfurt Golf Club where the old maestro made an appearance to play, along with his two younger sons, Harry and Nathaniel, in the American Express ProAm prelude to the 42nd German Open.

"I&#39;ve been working quite hard with my concerts lately, but I&#39;ve thoroughly enjoyed them. Over the years, I&#39;ve played many charity shows, but they haven&#39;t been on such a large scale as the recent presentations in London, Dublin and Edinburgh," Crosby said.

"My family has been taking part in the performances and I&#39;ve really enjoyed every minute of all of them. We had a great band, we played in great theaters and, most of all, we had a great cast &#8212; what more could a man want?" he added.

Harry is an accomplished guitarist and pianist who is interested in serious music, and Bing&#39;s wife is the former actress Kathy Grant. She is currently performing in "The Heiress" in Edinburgh and daughter. Mary Francis (16) also has shown some acting potential.

Crosby, of course, is a golf enthusiast from way back. He tries to play on weekends when the boys are out of school and his Crosby "Clambake," near Monterey, Calif., the first big pro-am ever staged, is one of golfdom&#39;s annual big attractions.

"Oh, I&#39;ve managed to get in a few rounds of golf in England, Scotland and Ireland between performances. The boys and I have had some wonderful times on those links courses. We really enjoyed Portmarnock (near Dublin), what a great course.

During his warmup, in preparation for partnering Spanish pro Angel Gallardo and H.O. Krings, president of the German Golf Federation, Crosby hit shot after shot straight down the middle on the Frankfurt driving range and he got off the first tee with a slight hook down the left side.

Harry was teamed with Severiano Ballesteros, the young Spaniard who fared so well in the British Open and won last week&#39;s Dutch Open and Nathaniel (14) played with South Africa&#39;s Hugh Baiocchi and Alexander von Bensheim.

White Christmas, Crosby said, had to be his favorite song, because it had the "biggest impact on my life." It had a big impact on many lives because it is the biggest selling single record of all times.

He said he had performed in something like 24 concerts over the past few years and had released six or seven albums and quite a few singles in the last 18 months in addition to his concerts.

"What do you do in your spare time?" he was asked.

"Oh, I golf. I fish. I travel. I enjoy life. And I do as much of this as possible with my family. The basis of a sound community is sound family life within the community and sound communities make for a sound country.

"I am very active in two organizations &#8212; the American League of Anglers and Ducks Unlimited. Too many of our American rivers are becoming polluted and too much of our forest land is being destroyed, much of it by sheer carelessness, and those two groups have been fighting a war to preserve the beauty of America and I try to do my bit to help them," he said.

Crosby also is interested in baseball, especially the Pittsburgh Pirates organization in which he has some cash invested. He spoke right up when he was told that John Candelaria had pitched a no-hitter against the Los Angeles Dodgers Monday night.

"He&#39;s a big lefthander and he can really throw the ball. Sometimes, he doesn&#39;t know where it&#39;s going, but then again neither do the batters. And that can be good sometimes," Crosby said. "Candelaria&#39;s been having a pretty year." (Ed. note: Candelaria owns an 11-4 record, proving that Bing keeps on the top of things.)

Der Bingle warbled bits of some of his songs. Like he said, he doesn&#39;t have that far out range any more, but he sure was enjoying his day at Frankfurt Golf Club Tuesday.