From the S&S archives: Cool Canadians are hot on ice 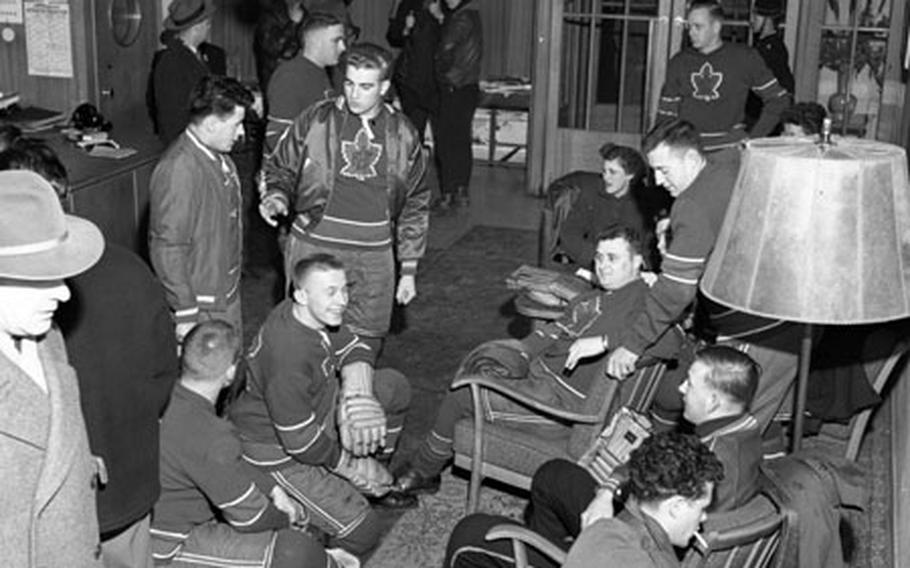 Players from the Canadian Flyers hockey team wait in a German hotel lobby before leaving for the rink in 1954. (Leigh Wiener / S&S)

Players from the Canadian Flyers hockey team wait in a German hotel lobby before leaving for the rink in 1954. (Leigh Wiener / S&S) 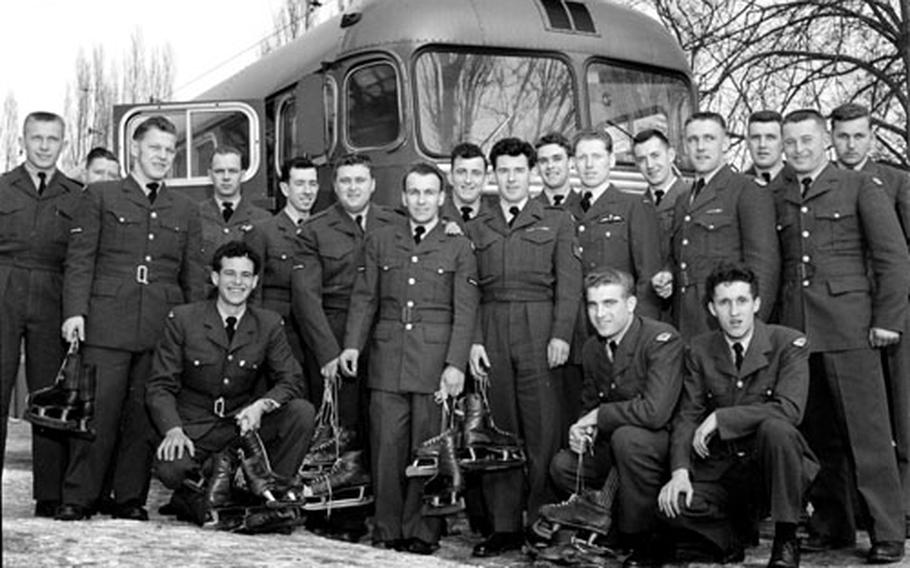 The Canadian Fliers pose in front of their team bus. (Leigh Wiener / S&S) Players prepare to head out onto the ice for a game at Munich. (Leigh Wiener / S&S) 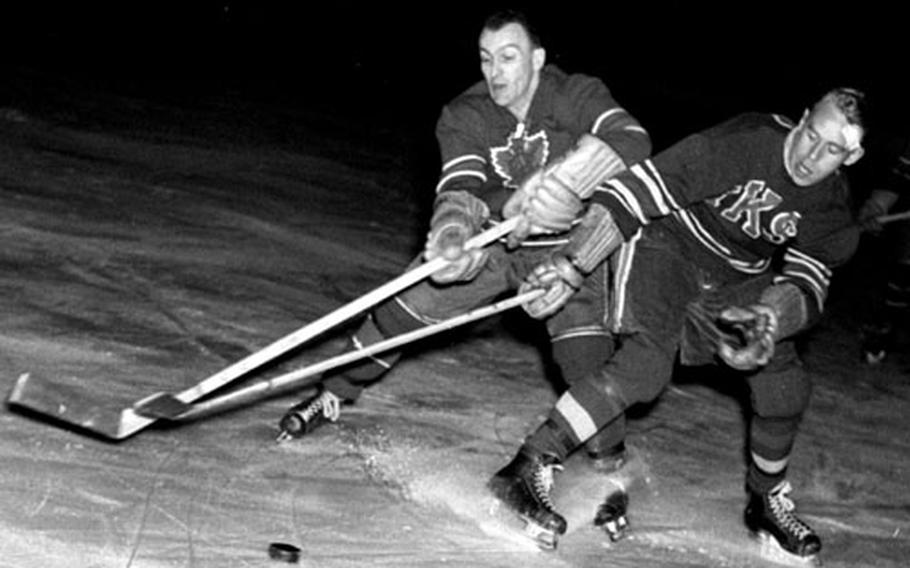 The Canadian Fliers take on a Swedish team at Munich. (Leigh Wiener / S&S) 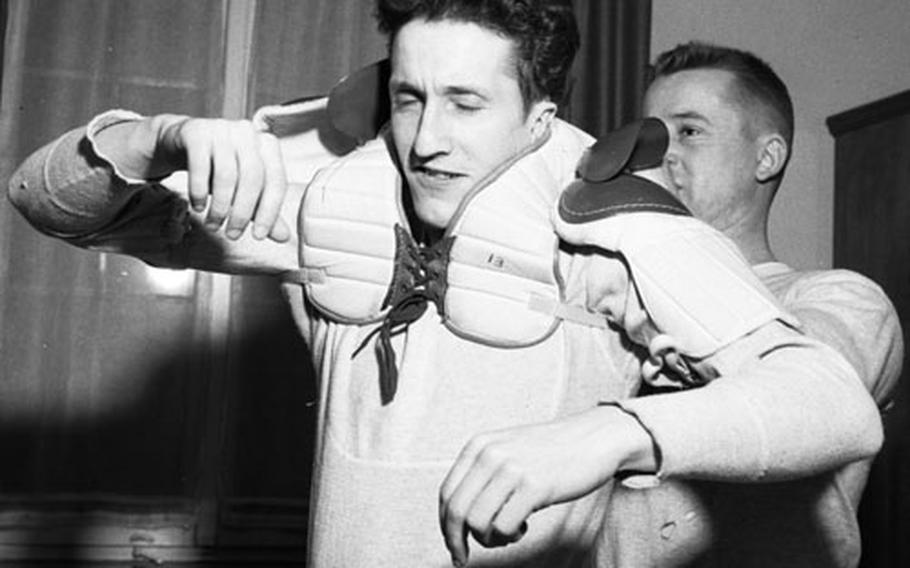 Vic Osowetski helps Ron O&#39;Meara put on his pads before they leave for a game. (Leigh Wiener / S&S)

It may be a little difficult to imagine a group of hard-skating, stick-wielding hockey players as ambassadors of good will between countries but that&#39;s just what&#39;s happening in Europe today.

It was only last December that RCAF Flying Officer Peter Cuningham was given the green light to form a hockey club of fellow members of the 3d Fighter Wing at Zweibruecken.

Since then the club has won 12 games, lost three and tied two in games played in Germany, Austria and Switzerland; become the "home club" of Munich&#39;s Prinzregenten Ice Stadium; and has won a following of Bavarian hockey fans who have "adopted" the Canadian Fliers as their own.

Director Dr. Fritz Krantz of the Munich stadium is enthusiastic about his decision to make a Canadian team Munich&#39;s representatives.

"This is quite an experiment," he said. "It is the first time a foreign team has ever been made the &#39;home club&#39; in a German stadium."

The director said he has noticed a gradual change in the attitude of the crowd. At first they cheered the visiting German teams and booed the Canadians. Now they&#39;re shifting their allegiance.

"Actually we&#39;re pointing towards next year, when we again plan to make the Fliers our home team," he said. "They&#39;re gradually gaining support here."

"I decided to bring the Canadians in here to show the German people and press real Canadian style hockey ... tough and rough, but not dirty," Krantz said.

The Fliers had to end their season prematurely March 5 because of "operational commitments of the players." However, Cuningham said organizational work for next year&#39;s team already has begun.

That the Canadian Fliers exist as a team is something of a crown to be worn by player-coach Cuningham. It was an uphill battle all the way and is still rough going.

The team literally was picked on paper. Last December wing members interested in hockey were asked to fill out a lengthy questionnaire on which they listed their previous hockey experience. From this candidates were picked.

The equipment arrived Christmas Eve because a Canadian pilot voluntarily gave up his holiday at home to fly the gear in from England. Then, with only two practice sessions under their belt in which the team was narrowed down to its present number, the Canadian Fliers began their campaign.

All members sacrificed their own leave and time off periods. They went to Garmisch where, still gaining their hockey legs, they took an 11-7 drubbing from Riessersee. Riessersee should have known the Fliers&#39; patterns. One of Riessersee&#39;s outstanding defensemen during November was Cuningham, who took leave time to get in some of his favorite sport. He is still listed as a member of the German sextet.

The Fliers still play "on their own time" and make nothing but expenses.

"We are just about breaking even " Cuningham said. "That&#39;s all we want right now. We&#39;re aiming at next year." Next year Cuningham apparently hopes to get some official RCAF backing and be able to field a team drawn from all RCAF units in Europe.

Practice presents the most serious problem these days. The Fliers can only get off on weekends, generally, unless they all take leave time simultaneously. They have tried to get in at least one practice session each week at Mannheim, the closest ice rink.

For Saturday night games the Fliers usually time their six-hour bus ride to get them to Munich&#39;s Hotel Esplanade about 4 pm. There they eat a heavy steak-and-potatoes meal and go to bed.

After a two-hour nap, they get up, suit up in their rooms and bus to the stadium an hour before 8 pm game time.

High scorer on the club is 5-foot 8-inch, 180-pound Ives Garand, who plays center. He flipped in 22 goals in 12 games and had 17 assists to his credit. Garand hails from Ottawa, where he played junior A and B hockey, intermediate and service hockey since 1947. His blazing speed and deft stick work make him a plague to opposing defensemen.

A crowd favorite and at the same time the best goalie to appear on the Munich ice this year is roly-poly Chuck Ouellet, from Quebec.

Left-wing Ron O&#39;Meara is another standout. He has five years of Canadian League hockey behind him. He&#39;s 5 toot 5 inches tall and only 142 pounds. Last year O&#39;Meara played with the RCAF&#39;s Trenton Fliers, three times champs of the Ontario Hockey Assn.

The Fliers carry their own referee with them. This would be a Stateside hockey team&#39;s dream, but as far as some of the Fliers are concerned, their Bill Hume can be a nightmare.. They feel he sometimes leans over backward in proving his independence.

Cuningham makes so bones abut pointing for next year. The late start this year plus other difficulties have made it more or less necessary to build for next year&#39;s team.

Cuningham thinks it will b good. "We do have trouble .. . with players being called away on assignments that prevent their playing every game. But as far as I can see, the better part of this year&#39;s team will be around next year."

He doesn&#39;t have to worry about age taking any of them away. They&#39;re all in their late teens or early twenties.

The coach himself? This venerable old sage who clambered over all sorts of obstacles to get a team on the ice is an ancient 21. Arid if he hasn&#39;t gotten gray-haired this far, next year doesn&#39;t worry him.