From the S&S archives: Come on, Jose, light my fire 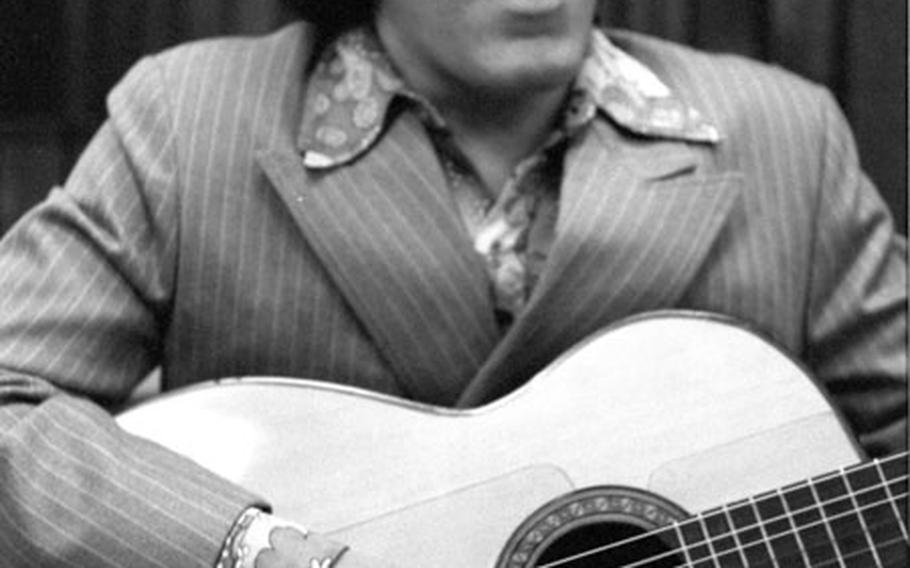 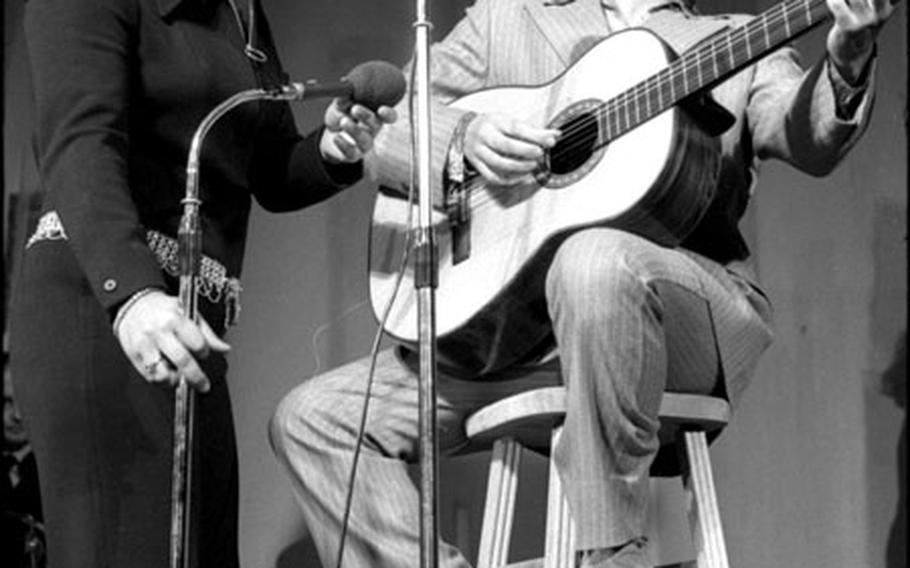 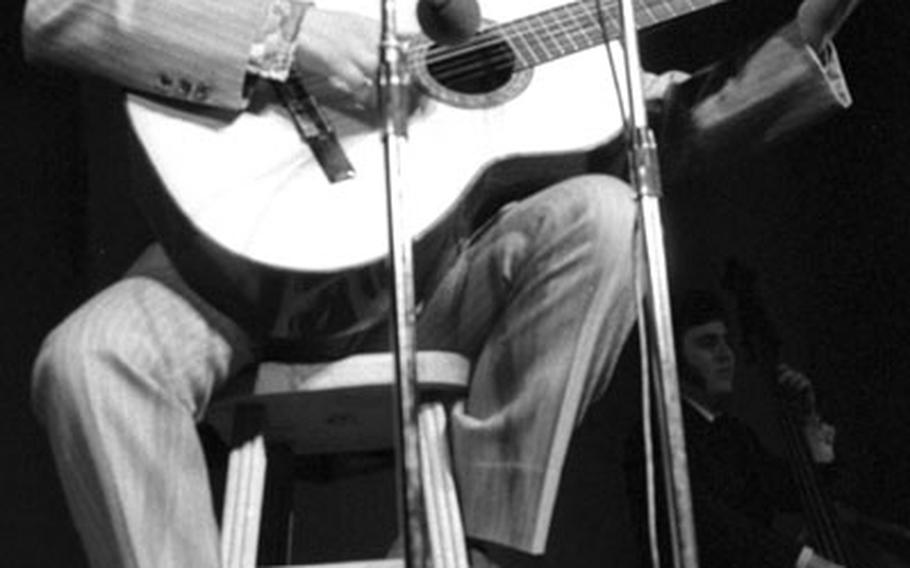 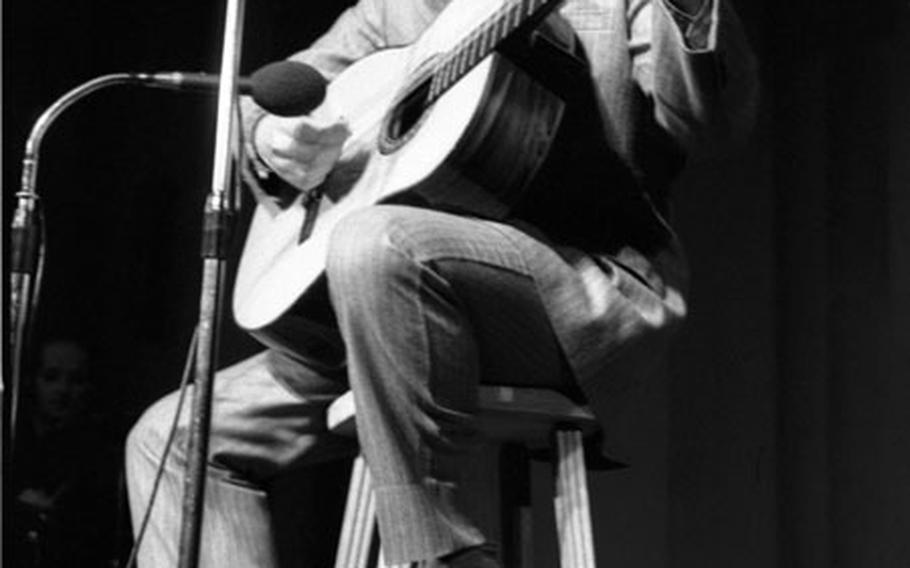 At Frankfurt, Germany, in March 1971, Jose Feliciano warms up backstage, is assisted in setting up by his wife, Hilda, then performs for the crowd. (Bruce Johnson / ©Stars and Stripes)

JOSE FELICIANO "arrived" in 1968. Blind since birth, the singer-guitarist had been around for several years when the big time beckoned.

Suddenly he was the focus of everyone&#39;s attention after winning two Grammy Awards as the best new artist and best male vocalist of the year for his recording of "Light My Fire."

Between concerts in Frankfurt, Hilda Feliciano &#8212; an impressive young woman in her own right &#8212; relaxed in a lounge chair and talked about her husband, her role in his career and their life together.

It was immediately obvious that Hilda is a determined woman. "We were living together in 1965," said Hilda sipping on a Coke and pausing for a reaction. "I had worked hard to promote Jose&#39;s career and it was only a matter of time until he made it big. Like any woman I&#39;m possessive of what I think is mine so I told Jose we should get married."

It was only a matter of days until the vows were said, she added.

HILDA and Jose go back a long way. They met in 1963 when he was 17 and she was a few months younger.

Casting a glance at her husband, surrounded by the ever present entourage, Hilda described the man:

"His moods are very changeable, he&#39;s competitive and has a need to assert himself. I guess Jose isn&#39;t overly masculine or too soft ... he&#39;s somewhere in the middle.

"Jose is happy I take an active part in his career. He knows I&#39;m one of two or three people that will do what&#39;s right for him."

Hilda doesn&#39;t like to call herself Jose&#39;s manager. Rather she says "I&#39;m the consultant, advisor and director of entertainment in a company we own together. Or, simply, make sure things run."

ON STAGE Jose plays one of the wildest guitars in the business to accompany his equally uninhibited singing.

He enjoys changing familiar lyrics to create sexual connotations &#8212; or running through a series of puns on his favorite subject.

If he finds them funny &#8212; and he inevitably does &#8212; the hall echoes with his Woody Woodpecker laugh.

During the first show Jose had elaborated on how much he enjoyed an afternoon visit to one of Germany&#39;s sex shops. "I had good vibrations in there," chuckled Jose. "Not to mention the special Braille girlie magazine they handed me."

Behind the octagonal wire-rim spectacles, a pair of dark brown eyes narrowed as Hilda sighed before answering.

"Yes, Jose is a devil and he loves to be risque. He&#39;s got enough confidence that sometimes he intentionally irritates me. I try not to let it get to me but when he wants to there&#39;s no hope."

With a faint smile site declined to elaborate.

Hilda excused herself momentarily as a European executive of RCA records entered the dressing room. They discussed business while Jose, five feet away, warmed up for the second concert. The husband-entertainer and wife-manager roles seem to be firmly defined although not without a degree of tension.

THE FELICIANOS, both 25, live in a sprawling house on six and one-half acres overlooking the ocean in Orange County, Calif. But they hardly live alone.

Hilda casually mentioned they have about 400 chickens, 200 ducks (it&#39;s impossible to keep track with the eggs hatching, she said) two dogs &#8212; a Boxer and Doberman pinscher &#8212; riding horses, 40 chinchillas, 20 hamsters, an assortment of birds and a few other friendly creatures.

An addition is expected in the near future when Jose&#39;s new seeing-eye dog joins them after graduating from training.

When not recording or touring the Felicianos stay close to home where they lead an active outdoor life.

"We both enjoy horseback riding and sailing," said Hilda. "In fact, we want to get a large catamaran."

"Would you believe I like to play softball?" asked Jose, "Yeah, I really do. The pitcher will throw the ball and yell swing just before it reaches the plate.

"I take a whang at it and sometimes get a good clean hit. But I also dig water skiing," he added de-emphasizing his handicap.

"Yet Jose has more freedom than most men. He goes out more, spends nights away from home and I never question where he&#39;s been."

The promoter abruptly ended the conversation with frantic pleas that it was time for Jose to go on stage.

HILDA brushed Jose&#39;s hair, then took his arm for the walk to the familiar wooden stool.

Hilda grins slightly and picks up the book she is reading.

They make quite a couple.