From the S&S archives: Collins and Co. worth the wait 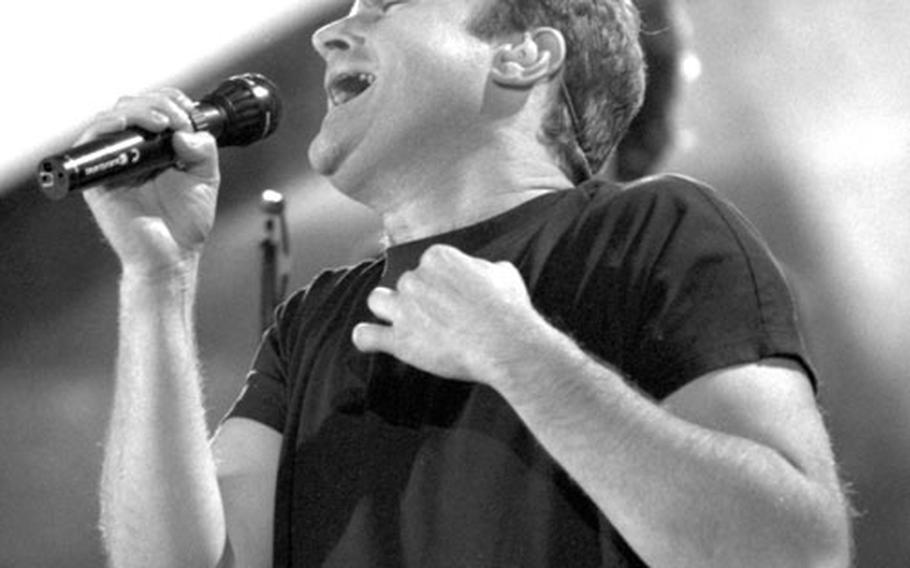 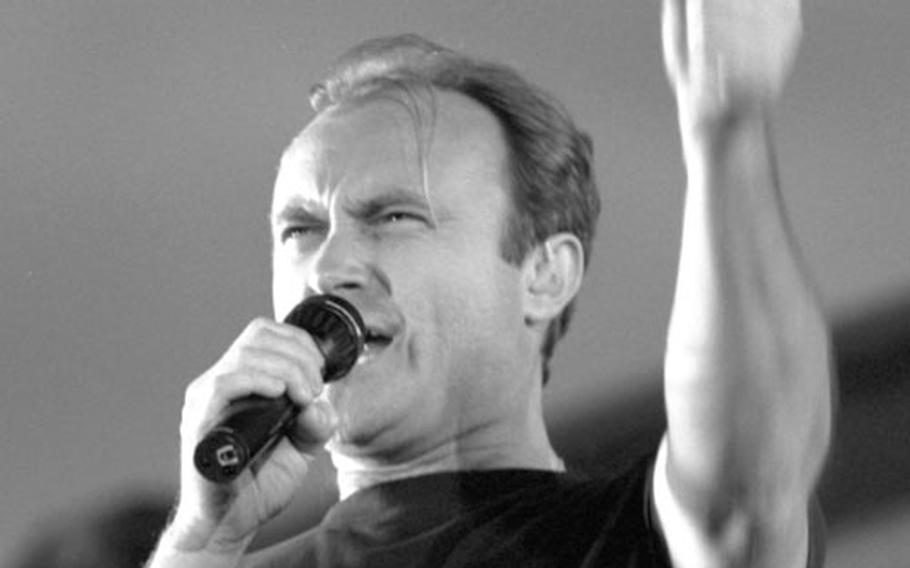 Buy Photo
Phil Collins, onstage with Genesis at the Hockenheimring in Germany in 1992. (Michael Abrams / ©Stars and Stripes)

In the time it took to get from just about anywhere in central Germany to the Genesis concert at the Hockenheimring near Mannheim Saturday, the average fan could have:

Flown to Great Falls, Mont., with a layover in Pittsburgh.Driven to Paris, ogled the Eiffel and returned.Traveled half the length of the Rhine River by slow boat.Instead, more than 75,000 Genesis fans invested the time in what was an almost unbearable quest for Collins & Co.

Local police seemed a little &#8212; make that a lot &#8212; overwhelmed by the teeming multitudes arriving by car from every direction. To say traffic was backed up is to say that Genesis lead singer Phil Collins may be losing a few strands of top notch.

People still were streaming into the Hockenheimring two hours after the published showtime, 40 minutes after the warm-up band finished and 20 minutes before Genesis took the stage.

Runrig, the opening act, filled the gap amiably with a 45-minute set designed both to placate and entertain the fans, many of whom were on edge after a three-hour ordeal of stop and go on the autobahn within a stone&#39;s throw of the stadium.

The Scottish sextet ran through seven songs, ending their feedback-filled appearance with an exhortation to the crowd to sing along with them in Loch Lomond, or "You take the high road, I&#39;ll take the low road ..."

They had few takers.

Maybe it was too fresh a reminder of the long slow road already traveled, or the prospect of an even longer return trip some hours in the future.

By 9:30 p.m., the sky had miraculously cleared of a mass of threatening rain clouds and the show was on. Drummer Chester Thompson and guitarist Daryl Stuermer joined Mike Rutherford, Tony Banks and Collins, the designated superstar of the supergroup, who came dressed down in black T-shirt and faded jeans.

Collins asked in German, "Wie geht&#39;s Euch?"or "How are you doing?" before leading the band into its popular MTV hit, Land of Confusion.

These marvels are fast becoming a staple of modern concerts, satisfying the music video generation and providing close-ups of Collins and the band for the multitudes seated in the nether reaches of the stadium.

Clocks overhead ticked off the passing of years during the second number, No Son of Mine, a new song from the prolific band&#39;s latest album We Can&#39;t Dance, while the crowd shouted along with the chorus. Those crystal-clear screens proved to be a technological lifesaver and interest-keeper during longer numbers in the show, especially the rambling Driving the Last Spike.

As if to underscore the opinion that modern concerts are overly rehearsed events carefully calculated to please the video-weaned, Collins demonstrated his mastery of the &#39;90s craft by synchronizing his singing to images of railroad workers flashing overhead, complete with complicated maneuvering by the three cameramen.

It was like watching the making of a music video. The same held true for other older numbers, including 1983&#39;s spooky Home by the Sea, which Collins prefaced by an echoed invitation to the crowd to come and visit "the other side."

Ghostly images floated across the screens as mists rose from the wings. The same effects were used in Domino, during which Collins was hoisted 30 feet above stage level and silhouetted against a spellbinding burst of laser images.

Unfortunately for those in the back rows, he looked a little like a fly on a 19-inch television screen.

There were other numbers from the Genesis song book that pleased those familiar with the band under former lead singer Peter Gabriel, such as the rambling The Lamb Lies Down on Broadway. While the crowd may not have known the lyrics to that or the next song, Musical Box, both were well received, especially the segments of the latter where Collins threw in a mishmash of the more recent Illegal Alien, Follow You, Follow Me and That&#39;s All.

It would have been nice to hear the more familiar songs in their entirety, but those are the choices only superstars get to make.

One had to wonder what the stadium must have looked like to the jets passing 10,000 feet overhead during the songs Throwing it All Away and Hold On My Heart. Cigarette lighters and sparklers blazed into a sea of light during these ballads that were sung amazingly true to their radio versions.

Collins reminded the audience that he is first and foremost a great rock drummer in a thumping duet with Thompson. After five minutes of a drum piece filled with style and substance, the band joined in with the unmistakable chords of their biggest hit from their new album, I Can&#39;t Dance.

Fans screamed their delight as Collins, Rutherford and Stuermer imitated the jerky walk from the music video flashing overhead, interspersed with close-ups of Collins&#39; crotch-grabbing and facial gymnastics as he made fun of the models and movie stars this song lampoons.

By the time they said their first goodbye, throngs of people were jitterbugging out of the stadium, hoping to get the jump on what certainly was going to be a stop-and-go drive out of the parking lots.

Collins broke away from the crib sheet of crowd-pleasing German-language remarks, which he had used throughout the two hour and fifteen minute show, to introduce the band and thank everyone for coming, this time in English, before launching into Turn It On Again.

It was the end of a satisfying concert, which is more than can be said about the nightmarish three-hour-stall in the parking lot on the way out.