From the S&S archives: Clay stops Mildenberger in 12th on TKO 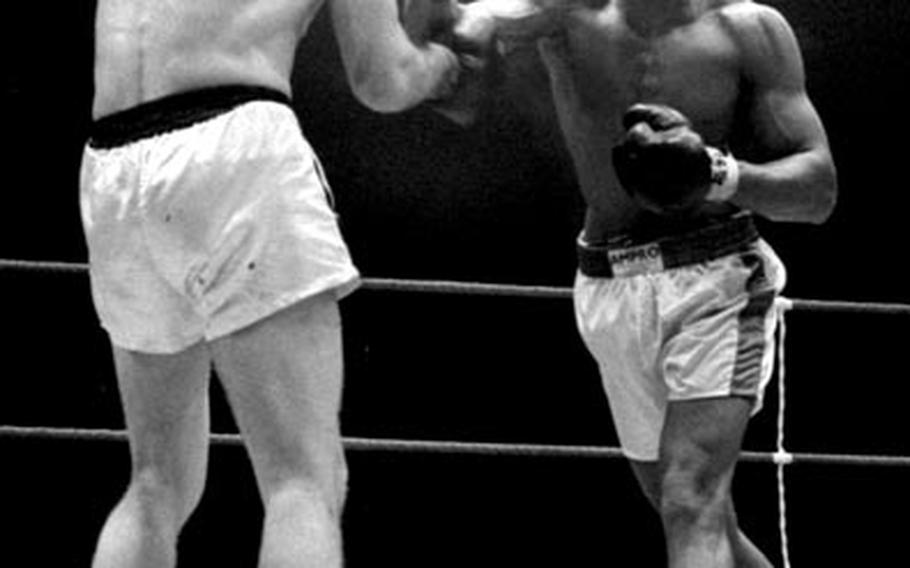 Muhammad Ali lands a right to the head of Karl Mildenberger, moments before referee Teddy Waltham stops the fight in the 12th round on September 10, 1966. (Red Grandy / ©S&S)

FRANKFURT, Sept. 10 &#8212; Cassius Clay, surprised and stung in the early rounds, battered Karl Mildenberger into submission in 1:30 of the 12th round to retain his heavyweight championship of the world here Saturday night before 45,000 spectators in Forest Stadium.

It was a night of surprises and epic firsts in a fight that was billed as merely a workout for the loose, lithe Cassius, who prefers to be called Muhammad Ali while espousing the cause and faith of the Black Muslims.

And it was this same lefthandedness that seemed to puzzle Clay and made him appear extremely cautious in the early rounds.

But it was the raw courage of the tenacious Teuton, who dripped with gore from cuts over both eyes, that had the nationalistic crowd chanting "Milde, Milde" throughout the fast-moving bout.

Mildenberger, the 28-year-old European champion, never gave up in his futile effort to catch the elusive champion and the end came with the blood-besmeared German standing helpless against the ropes as referee Teddy Waltham mercifully stepped in to stop the bout.

"I think the referee did right to stop the fight because Mildenberger got a bad beating," the unmarked Clay said in his dressing room later.

Mildenberger, his battered face swathed in towels, said, "at first I thought the referee&#39;s call to stop the fight was unjustified, but now I think the decision was right."

The victory was Clay&#39;s 26th without a loss since turning professional in October of 1960. It was his fourth title defense this year and the 24-year-old champion has signified that he wants two more fights &#8212; against Cleveland Williams and Ernie Terrell &#8212; before the year is out.

For Mildenberger, it was his third loss in 55 fights and it was his first loss against an American in 22 appearances.

This was another first for Mildenberger and it was one of which he need not be ashamed.

Practically forsaken by friend and foe alike and made a 10-1 underdog, the beetle-browed German put up a tremendous fight before the end came in the 12th.

Giving away nine pounds and five inches in reach, Mildenberger, in superb condition at 195 pounds, carried the fight to the champion from the opening round, continually pressing and trying to get over his left hand.

Clay, content to dance and coast until the challenger landed with his right-hand jabs, fought in bursts at the end of each round to catch the judges&#39; nod for a clear majority of the complete rounds.

Referee Waltham scored the fight seven rounds for Clay, two for Mildenberger, and two even. Waltham gave the third and ninth rounds to the German.

The champion decked his opponent in the eighth and 10th rounds and only the bell averted another knockdown in the fifth.

But the real damage was done by Clay&#39;s left hand that flicked like a duelling sword and sliced the challenger&#39;s face into crimson gore from the fifth round until the end.

There seemed times when the youthful champion was puzzled by the southpaw style of Mildenberger and in the ninth and 10th frames it appeared that Clay was slowing up appreciably and was missing frequently with his counter punching against the dogged German&#39;s persistent attack.

But at the close of the 10th, with the pro-German crowd chanting for their warrior, Clay caught Karl with a terrific right hand to the head that tumbled the challenger in a complete somersault.

The dead-game Mildenberger wobbled to his feet at the count of six, but as the count reached the mandatory eight, the gong sounded to save him from almost certain oblivion.

Clay, sensing victory. rushed out at the 11th and lanced open Mildenberger&#39;s face again with savage lefts and rights and the crowd that had chanted for Milde now sank into silence as the challenger seemed sapped by the accumulation of punishing blows he had absorbed.

The relentless Cassius ended it quickly in the next round. Flailing away with lefts and rights, he had Mildenberger&#39;s knees buckled and the German was battered and bleeding against the ropes when Waltham stepped in and threw his arms around the challenger to save him from further punishment.

In another historic first of this title fight, television viewers in the United States were able to see it live in color via the Early Bird Satellite.

Although it was not televised in Germany, Eurovision carried it to 10 European countries and the principality or Monaco and delayed rights were sold to seven other countries around the globe.

Also present were Joe Louis, one of the all-time greats in boxing history, and former world&#39;s heavyweight champions Max Schmeling of Germany and Ingemar Johansson of Sweden.

On his way to the dressing rooms, Louis said, "When I came in here I thought Mildenberger could last no more than two rounds."

"But," the Brown Bomber added, "when I watched in his training camp during his workouts, I was convinced that he could go longer, and he did."

He said, " Miidenberger showed great courage. It was a very good fight and I think it helped boxing,"

Schmeling, who was knocked out by Louis in the first round of a title fight 28 yours ago, said "Mildenberger gave everything he had to give."

"Clay dominated from the start," Schmeling continued, "but Mildenberger showed up Clay&#39;s weak spots. The second and ninth rounds were Karl&#39;s best"

Johansson, who won and. lost the world title to Floyd Patterson, was not so charitable.

"Mildenberger was completely outclassed," he said. "He was not in the same class. ..."

In a preliminary bout that held quite an attraction for the large contingent of American servicemen at the bout, Jimmy Ellis took an easy six-round decision over Billy Daniels in a heavyweight contest.

The bout preceded the main event and was a portent of things to come as Ellis worked with Clay as a sparring partner while Daniels, once a ranking heavyweight, was in Mildenberger&#39;s training camp.