From the S&S archives: Cash on the line to freedom 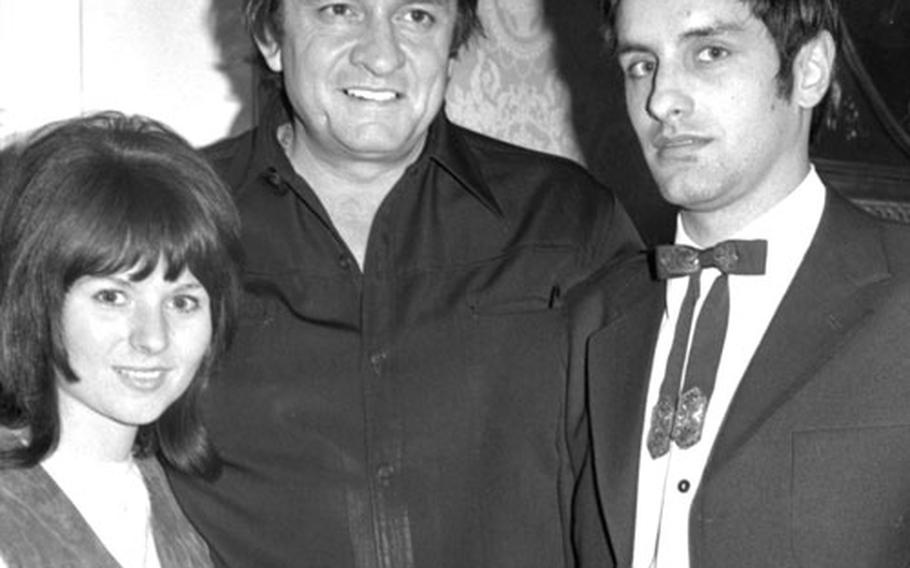 Buy Photo
Heidi and Edgar Schuchardt with Johnny Cash, whose music they said was a factor in their decision to defect from East Germany. (©Stars and Stripes)

DREAMS HAVE A WAY of becoming reality for Heidi and Edgar Schuchardt, an East German refugee couple.

Although it&#39;s been a few years now since the young couple realized their first hope of fleeing from behind the Iron Curtain, another dream materialized for them in Frankfurt.

THIS LATEST happening was a meeting between them and their long-time singing idol, Johnny Cash, whose records they credit with aiding their flight to freedom.

"It&#39;s quite an honor to meet you," drawled the country artist, after hearing of their adventure.

Heidi managed, in halting English, to respond, "It&#39;s a big joy for us. Thank you very much."

The meeting had been set up through combined efforts of a reporter and Cash&#39;s manager, Saul Holiff. As guests of the Lippmann and Rau agency, local promoters for the concert, the couple later attended the Cash show.

Since 1963, as students in East Germany, Edgar and Heidi schemed to leave their Communist homeland. But the Berlin Wall and the barriers surrounding the rest of East Germany made escape almost impossible.

EDGAR FINALLY decided he would have to sneak through a border checkpoint, and to do this, he would need an accomplice from the West.

Through the British Forces Broadcasting Service, the American Forces Network and West Germany&#39;s broadcasting system beamed from Cologne, the two started listening to a sound new to their ears, American country music &#8212; and liked it.

"Many of the numbers we heard were by Johnny Cash, who soon became our favorite," said Edgar.

They taped some of the shows and by replaying them, Edgar said he began to understand a little English. He also obtained the name of a West German country fan from the tapes.

Edgar decided to correspond with the West German, but he knew he would have to be cautious because the mails were censored.

"I. HAD TO use a wrong sender&#39;s address and leave no fingerprints," recalled Edgar, who added, "I mailed the letters from a different point each time."

By now Edgar and Heidi had become engaged.

After writing his country music pen-pal for a time, the young East German decided, "he seemed intelligent enough, so I began to try to win him over to my plan. I sent him newspapers and my comments ...then I invited him to the DDR (East Germany).."

The "partner&#39;s" visa request to visit East Germany per se was denied. It was decided to meet in East. Berlin. The C&W music fans held their rendezvous in a dimly-lit East Berlin cafe where most of their daring escape plan was conceived.

A coded telegram would set the time and date for the freedom flight. It was also agreed that the route would be from Czechoslovakia into Austria.

July 1968 eventually was set for the escape attempt.

"BECAUSE OF THE tension in Czechoslovakia," Edgar said, "it was at first very difficult to obtain a visa into that country." (A month later, the Czechs were invaded by Russian and other East bloc troops.)

Heidi and Edgar hitchhiked to Prague where they met their rescuer, who arrived "in a big, old sedan." They would have to try to escape, each snuggled inside a hollowed-out fender.

Once inside their fenders, Edgar and Heidi&#39;s benefactor drove to the checkpoint. She scarcely dared breathe, she said.

The local border police inspected the car from top to bottom, checking the interior, the luggage, under the hood and underneath the car. After, what seemed to Heidi and Edgar, an eternity &#8212; but was about 15 minutes &#8212; they heard the welcome sound of the motor "revving" up.

After a short ride, the car halted and their "ally" informed the two "passengers" they were: home free.

"WE CREPT out of our hiding places and almost could not believe it," recalled Edgar. "Ah, it was wonderful."

Shortly after their escape, the two were married and settled in a small college town in West Germany, where Edgar completed his studies specializing in computer programming.

The Schuchardts now have a baby daughter, named after their favorite American female vocalist, Loretta Lynn.

Edgar, happy over his personal meeting with Johnny Cash, says he has a new dream, to visit Nashville, Tenn., the home of country music.

After a thoughtful pause, he added with a wry grin, "You might even say, we escaped to the West, with the encouragement of American country music."