From the S&S archives:Carter slams Soviets over arms race 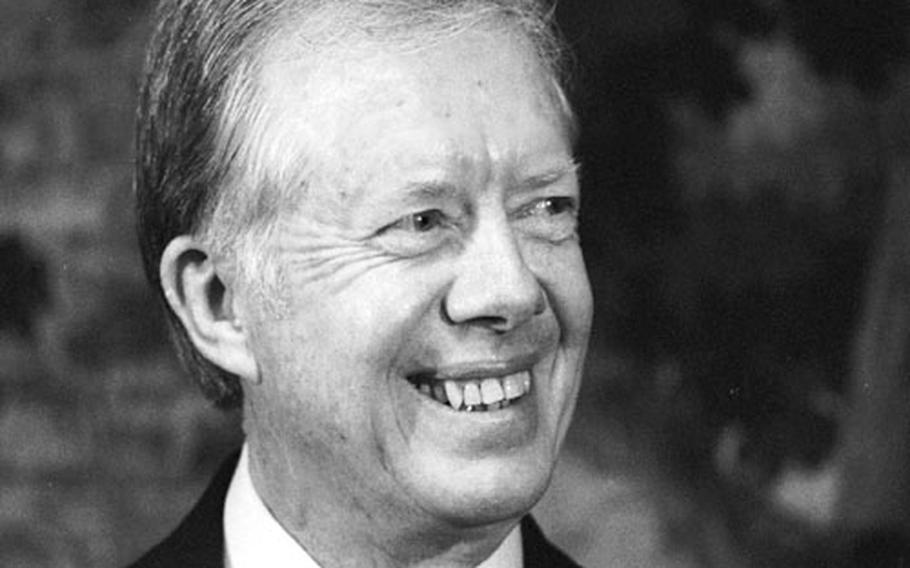 FRANKFURT &#8212; Former President Jimmy Carter said Wednesday the pace of the nuclear arms race should have been slowed during his years in the White House, but the Soviet Union wasn&#39;t willing to negotiate missile reductions seriously.

That unwillingness, coupled with the "unnecessary buildup" of the Soviets&#39; SS-20 missile arsenal, was the primary reason for the decision in December 1979 to install U.S. Pershing II and ground-launched cruise missiles in Western Europe, Carter said. The deployment is scheduled to begin late next year.

"I consider that commitment to be very important, and my hope is that we will carry through &#8212; on schedule &#8212; with the deployment of those missiles," he said.

Carter noted that Soviet President Leonid Brezhnev refused American proposals to freeze development and deployment of nuclear weapons and to implement the SALT II treaty and a nuclear test ban.

Carter said the use of nuclear weapons by NATO to counter a Warsaw Pact invasion would have to be a possibility in view of the Soviet Union&#39;s "completely unwarranted" military buildup.

"I don&#39;t think you could safely remove the possibility of nuclear forces being used if Western Europe&#39;s security is directly threatened," Carter said.

Carter later made a three-hour stopover in Bonn, where he met Chancellor Helmut Kohl for talks on relations in the Atlantic alliance and the current political situation in Europe.

Kohl, who will travel to the United States next month to meet President Reagan, stressed to Carter his intention of stabilizing German-American relations.

The former president said that despite talk of dissension among NATO allies, most notably on nuclear weapons, "The fact is that we and our allies are tied together irrevocably with a common purpose.

"The hope of all of us is that we can have a general elimination of nuclear weapons and an equivalency in conventional forces in the European theater," he said. "But short of both those achievements, we have to be prepared to let a potential aggressor know that the consequences of an invasion would be suicidal to them."

Carter acknowledged there has been question about the resolve of certain allies to deploy these weapons. "But I met with Belgium&#39;s leaders Tuesday, and I have no doubt that they will carry out their commitments when the time comes," he said.

"We&#39;ve got to convince the Soviet Union that we are prepared to defend ourselves and to do it without equivocation and without apology," he said, "That&#39;s the best avenue for peace."

Carter said the Soviets have maintained massive expenditures for their military structure at great sacrifice to their economy "in a fashion that has no rationale unless they intend someday to have the ability to invade."

"The realization of this fact is important, and I hope Belgium, the Netherlands, West Germany, Italy and others will go ahead without any further equivocation and deploy these limited weapons to convince the Soviets that we have to negotiate," he said.