From the S&S archives:Carter meets with Hirohito, Ohira 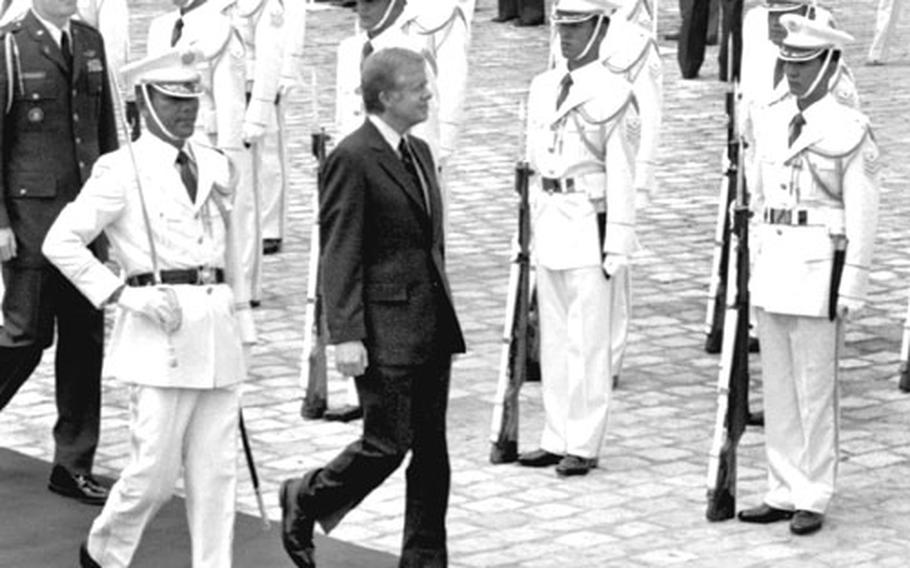 President Jimmy Carter troops the line of the honor guard at Akasaka Palace, where he was to meet with Emperor Hirohito, in June, 1979. (Chet King / ©S&S)

TOKYO &#8212; Lifting his glass to Emperor Hirohito, President Carter declared Monday that the seven nations meeting here for the economic summit conference could plant a seedling that would "blossom into blessings of prosperity &#8212; and peace to disadvantaged people all over the world."

In a state banquet at the Imperial Palace, Carter told the frail, 78-year-old sovereign:

"Your: Majesty, I understand that at the beginning of each year, you plant a tiny rice seedling, as a symbol of your hope that your people will enjoy a bountiful future."

In the same light, Carter said, the industrial democracies could do spadework that would go far beyond repairing the energy crisis and an imbalance of trade.

"I share your faith that (by) working together, both our peoples can enjoy a more hopeful, more prosperous future and that together with our allies and friends, we can do much to spread the blessings of prosperity and peace to disadvantaged peoples around the world," Carter said.

With combined and united resources that could come out of the two-day talks that begin Thursday, Carter said, "I am confident that together we can build a world in which all people can live in peace."

"We pray for the time to come,

"When East, West and all,

"Making friends with one another,

Carter, who arrived Sunday for a three-day state visit that will be an overture to the summit, began a busy day with a jog around the American Embassy grounds and a swim in the pool behind Ambassador Mike Mansfield&#39;s official residence. Carter appeared happy and tireless, but walked some of the day without two familiar figures &#8212; wife Rosalynn and daughter Amy dropped out with what a statement called an "intestinal virus."

Monday began with elegance and splendor as the president and his wife went to the magnificent Geihinkan (state guesthouse) for all the impressive flourishes of an official arrival ceremony.

Honor guards in white uniforms with gold piping stood in the courtyard of a greystone building crowned by green brass figures of heroic samurai and golden falcons and globes girdled by stars. American servicemen, brought by buses from local bases, mingled behind a cable with Japanese elders from chokai &#8212; neighborhood associations. Primary schoolchildren in blue and white uniforms filed in.

A vanguard of police vehicles brought in a glittering fleet of limousines, with Carter and Mansfield alighting from the first to go into the 70-year-old building that is also called the Akasaka Palace. There they met Hirohito, who came out with them to stand on a red carpet beneath a stone archway and balcony as the national anthems were played. After greeting Prime Minister Masayoshi Ohira and members of the royal family, Carter trooped the line of the honor guard in company with Air Force Maj. Robert Peterson; his mllitary aide. The schoolchildren frantically waved Japanese and American paper flags and Carter stopped to beam and wave back at them.

He and Mrs. Carter were then taken to the Imperial Palace for another meeting with the Emperor and Empress Nagako. Gifts were exchanged &#8212; books, artwork and a large, glass-cased doll for Amy, who remained in bed at the embassy.

Another swift change of scenery took the Carters to Ohira&#39;s official residence, where he and the prime minister discussed topics that will be brought up when they sit down with the leaders of France, Great Britain, Italy, West Germany and Canada.

At a luncheon that followed, Mrs. Carter left the reception line just after Carter called out to hurry a long column of guests along. She went back to the embassy and was not seen again until the imperial banquet.

The officials were vague and inexact when asked if the United States and Japan plan to propose a "freeze" or stiff limitations on oil imports, saying it would be unwise to publicize summit proposals before they are presented at Akasaka Palace Thursday and Friday.

They denied that Carter criticized Ohira because his country has accepted only a few Vietnamese refugees while the United States has taken thousands, saying that Secretary of State Cyrus Vance and Foreign Minister Sunao Sonoda are working out a framework of discussion Carter and Ohira will bring up the summit.

The officials said energy was the dominant topic at the. Carter-Ohira meetings, which began when the prime minister: visited Washington last month, but stressed that no specific, concrete plan will be forced on the other leaders.

At the banquet, Carter indicated he expected fruitful results from the summit, held in the face of an Organization of Petroleum Exporting Countries conference that may raise rates 44 percent. He had no doubt, Carter said, "that our factories and farms and homes can draw on abundant, secure sources of energy."

Carter also visited Meiji Shrine, named for the emperor&#39;s grandfather and consecrated to the ruler who took Japan out of feudalism and into the modern world. Walking first through the towering torii gate at the entrance, Carter went to the main shrine and walked between red-jacketed female attendants and elders who were brought in as a reward for their support and devotion.

Carter signed a guestbook and was asked if he made the customary wish.

"I sure did," the president said.

Pressed for what the president penned, Mansfield asked if reporters could keep a secret and then dryly said, "His name."

It was later learned that Carter wrote:

"Jimmy Carter, for peace and friendship among all people."