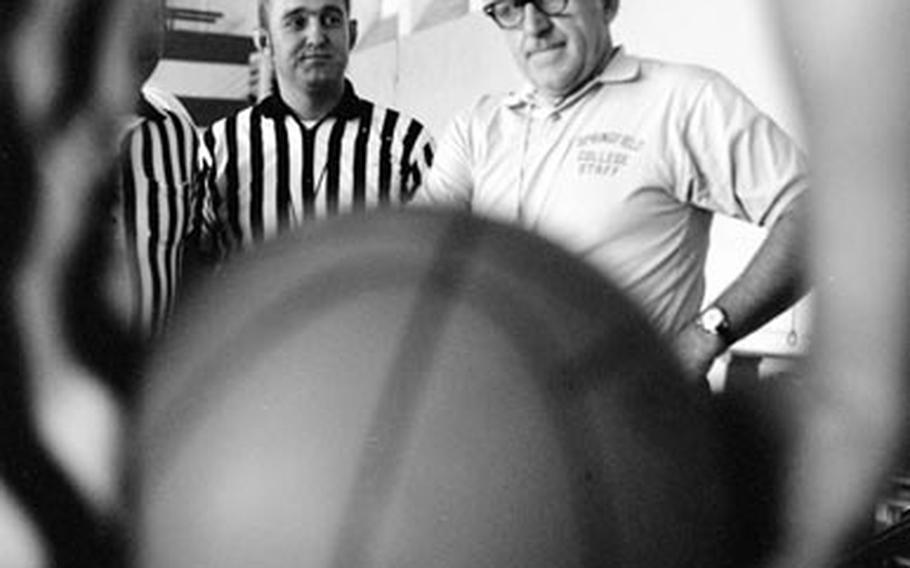 AUGSBURG, Germany &#8212; "The basketball program in Europe can be no better than the officiating," Dr. Edward S. Steitz of Springfield (Mass.) College says.

The Beacon, N.Y., native, here for a week-long basketball clinic for referees from southern and eastern sections of Germany and headed for Smith Barracks in Baumholder (Oct. 8-12), said, "if you don&#39;t have good officiating, the quality of your basketball isn&#39;t going to improve. There&#39;s some fine talent here and this is a real fine educational outlet for them."

Steitz sits on the U.S. Rules Committee for basketball as editor of the rule book and is head coach at Springfield, where his court fives have compiled a 185-86 record in the past 10 years. His two-week swing through USAREUR is preparing referees for the coming season.

Slides, films and lectures about recent rules changes and interpretations, plus proper positioning of the officials so they can see the action, highlight the clinics. The 51 attending here ended the week with practical applications during practice games, where critiques brought out the latest developments.

Steitz told The Stars and Stripes that recent rules changes are designed to end fights by insuring that one official is always watching the players. To prevent stalling, he said, research is being conducted in the Big Eight conference. A 30-second rule, similar to the pro 24-second rule, prevents "the rabbit" from dribbling the ball all over the forecourt to hold down scoring.

"If a man is closely guarded and holding or dribbling the ball in the forecourt, he must pass or shoot in five seconds or it&#39;s a jump ball," Steitz said. "We did research on the rules &#8212; had found that the ball changes hands 99.3 per cent of the time in 20 seconds. The Big Eight used the 30-second clock last year and didn&#39;t like it. The Southwest and Big Eight are going to try it again this year for research."

The dynamic athletic director said, "We don&#39;t want to maintain the status quo in basketball." Then he added that they didn&#39;t want to change just for the sake of changing, but want to use research to see if a rule chance is for the good of the game.

He noted that some officials here were not familiar with the latest interpretations of the charging and screening regs. With charging, he said, the important question is who got there first; with screening, is the screener stationary?

He said the main purpose here is to see that the officials learn to make "the bread and butter" calls right and know how to get into position to see all the action, not just part of it, and then to learn to officiate with finesse.

"In the amateur game we try to have equity between the offense and defense," he concluded.