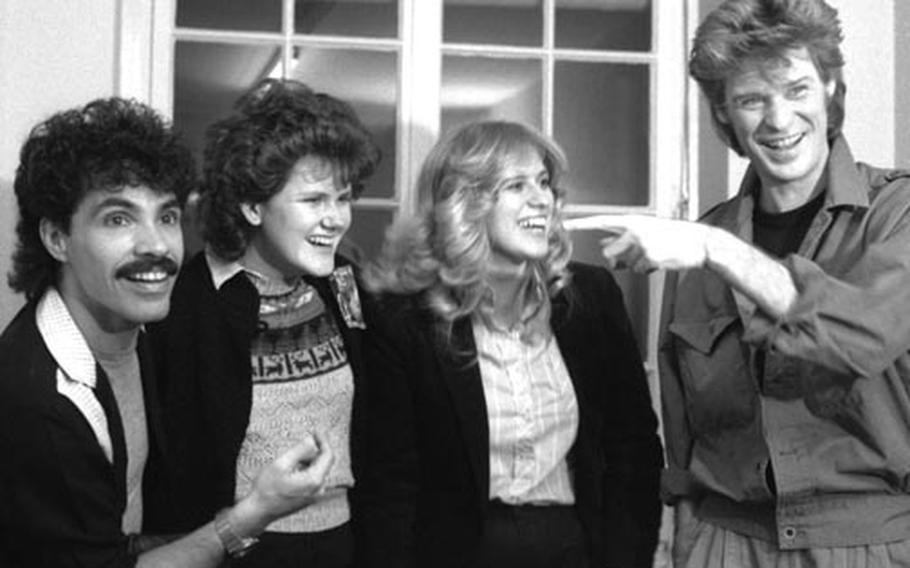 Fans Deborah Bland, second from right, and her friend Lisa Large meet Daryl Hall, right, and John Oates before the Hall & Oates show at the Festhalle. Bland, a military spouse from McNair Kaserne in Hoechst, won tickets to the show and the backstage visit with the popular rockers in a contest sponsored by AFN and the USO. (Anita Gosch / ©Stars and Stripes)

How many Olympic medals did Cathy Rigby win?

Deborah Bland knew the answer &#8212; and won an evening with the rock and soul duo, Daryl Hall and John Oates.

In the contest, sponsored by AFN and the Frankfurt USO, listeners answered different trivia questions asked on the air several times every day. Callers with correct answers won preliminary prizes, ranging from T-shirts to albums and concert tickets.

Winners were recorded and, in a drawing on March 15, a grand prize winner was selected.

"I called every day and every time, whether I knew the answer or not," said Deborah. "I just had a feeling that I would win."

DEBORAH WAS ECSTATIC when AFN disc jockey Sgt. Robert Swisher called to tell her that she was the lucky winner.

"I have been jumping around ever since. This is just wonderful."

Deborah was able to choose between two prizes: an evening with Hall and Oates in Frankfurt, or an all-expense paid trip to Amsterdam to meet the British band Whitesnake.

She chose Hall and Oates because "I&#39;ve been a fan of theirs ever since their album &#39;Private Eyes&#39; came out, so I really wanted to meet them," she said. "All I know about Whitesnake is that they&#39;re heavy metal, and I don&#39;t really like heavy metal."

But soon the butterflies set in. "What should I ask Hall and Oates?" Deborah asked. "They&#39;re world-famous, and me, I&#39;m just a little worm. What do you ask these kinds of people?"

By the time the big evening, Saturday, March 17, had arrived, Deborah had calmed down.

Swisher picked up the two women at home and they arrived at the Frankfurt Festhalle shortly after 7 p.m. Sitting in the press section, they "thoroughly enjoyed" the Hall and Oates&#39; show, as well as that of the Australian warm-up band, INXS.

Following the performance, Deborah and Lisa went backstage where they met the famous duo.

DURING THE 15-MINUTE CONVERSATION, Deborah asked one question she had decided she most wanted to ask: "What inspired the song, &#39;Sara Smile&#39;?"

"Sara did," Hall replied, "and she happens to be sitting in the next room." (Sara Allen is Hall&#39;s longtime girlfriend and co-writer of such hits as "Adult Education," "Maneater," "Private Eyes" and "I Can&#39;t Go For That (No Can Do).")