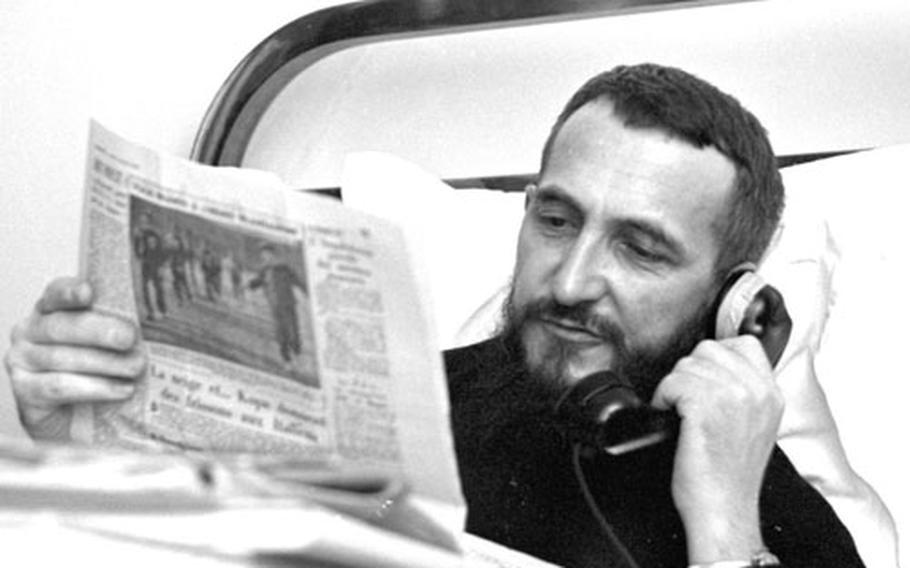 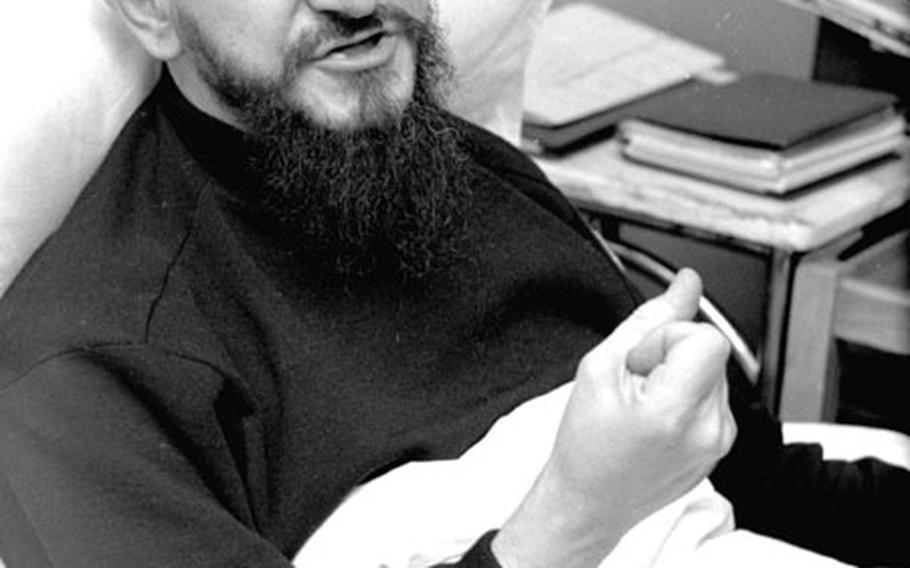 Despite being confined to a hospital bed, Abbe Pierre conducts business and talks to a reporter in 1956. (Ted Rohde / ©Stars and Stripes)

A BITING WIND pierced through a clearing in the woods at Noisy-le-Grand west of Paris this month, brushing yellow leaves across the faded grass.

It was autumn, a chilly damp fall, which every Parisian knows turns into a cold, gray winter. No one knows this better than the sans logic, the thousands in France who are without homes. Energetic workmen, the most of them, theirs is a case of sheer hard luck. They would provide homes for their families if they could.

But there just aren&#39;t enough houses to go around and this is especially true in the Paris area. Thousands of new homes, most of them in the form of huge apartment projects, have been or are in the process of being built in and around Paris. However, the waiting list is endless, Only the higher salaried can demand the type of housing they require.

The sans logis double up in hotel rooms, with relatives, or, in the most pathetic instances, in lean-tos and shanties they have built along the banks of the River Seine or in the suburbs and even in caves. For them the approach of winter means hard times.

Around the fringe of the clearing at Noisy Le-Grand. are several of these shanties, as well as tents, which are the only shelter for some of the homeless. As winter began to close in, this group found new hope.

A big U.S. Army bulldozer and a two-ton crane and trucks were rumbling past their shacks. The bulldozer was leveling streets and digging holes into which the crane placed concrete septic tanks. Within a month a housing development with a score of new apartments would become a reality. Without the Army&#39;s contribution of heavy equipment and men to operate it, the plumbing and drainage could not have been completed in time for occupancy before winter.

The Noisy-le-Grand homes are a part of the program of the Association Emmaus, headed by one of France&#39;s most remarkable men of the century, Abbe Pierre, Catholic priest who has set out upon a one-man crusade to house les miserables and to awaken the public to the urgency of a strengthened state-supported home-building movement.

A small, bearded, dark-haired man, Abbe Pierre has worked unceasingly for the past five years for these goals. Always in poor health, he has now reached the point where he is disabled and must spend part of his time in a clinic.

From his bed he continues his charity campaign with an enthusiasm seldom equaled. The telephone rings. It is the secretary of a French deputy asking for an appointment to discuss housing for some of his homeless constituents. Or it is the manufacturer of prefabricated dwellings who has been induced by Abbe Pierre to cut the price of his houses.

Abbe Pierre makes television appearances, appeals for relief for the homeless on the radio, in newsreels and in his own magazine. He has written numerous books and pamphlets. He is an authority on the problems of the sans logis and he has a solution.

"The world is big enough for everyone and is quite able to provide food and housing for all," he said recently in an interview with The Stars and Stripes at the Paris clinic where he was confined. "But the organization is lacking. This organization, consisting of love and unselfishness, is now necessary, not only in France but in other western countries as well."

Nearly everyone in France endorses Abbe Pierre&#39;s philosophy and he has a growing number of followers. Some have described him as the most popular man in the land. Catholics, Jews, Protestants and free thinkers alike respect and admire him, his principles and his achievements. The little priest&#39;s career parallels that of a saint.

He was born in Lyon, the son of a well-to-do silk manufacturer, but he renounced his inheritance to attend a Jesuit college, became a priest in 1938 and later was made vicar of a parish in Grenoble.

His crusade to help the unfortunate, to which he has devoted all his energy ever since, began during World War II when, as a member of the Resistance, he aided Jews in escaping from the Gestapo. He was a link in the underground which helped refugees across the Spanish frontier.

Arrested twice, he escaped to North Africa and became a French Navy chaplain for the duration of the war. Back in Lyon, he was elected a deputy in the French National Assembly, but noting the feeble, often disorganized manner in which public housing was directed, he went out on his own to set up the Association Emmaus to aid desperate workers&#39; families, derelicts and others who were down and out. He relinquished his parliamentary career because, he says, "I couldn&#39;t accept a (housing) law without justice."

He organized the heads of unfortunate families into armies of workers who built their own shelters. The Noisy-le-Grand housing area, now reaching completion with the assistance of Com Z&#39;s 553d Engr Bn, is an example. The builders are the future occupants. When they move in they will pay between 3,000 and 4,000 francs ($8.40 and $11.20) a month and after a period of 20 years the apartments, simple but modern, will be theirs.

Each has two or three bedrooms, a bath or shower, living room and kitchen. There is a backyard where families can raise their own gardens. A short distance from Noisy-le-Grand, in the village of Combault, similar homes are already occupied. Several small but pleasant houses here, all surrounded by vegetable and flower gardens, are previews of what is in store for other families soon. At Combault, the association maintains a work shop where some of the carpentry and prefabrication for the other projects is done.

Several construction innovations have been put into use. For example, the pipes for plumbing are of a plastic material, allowing them to freeze without danger of breakage, thus requiring a minimum of insulation and cutting building costs. A new-type tile flooring is laid in entire sheets, rather than in individual squares. Bathroom fixtures are so arranged that the same water tap, on a swivel, can be directed to either tub or basin.

The cooperation of the American soldiers in aiding the homeless of Paris is exactly the kind of human good will for which Abbe Pierre has been searching. He believes that people should give of themselves to help the needy. This does not necessarily mean money, he explained in the interview.

"It is not that America doesn&#39;t give enough money," he said. "She gives more to the rest of the world than all other countries combined. But money alone has little value and sometimes its results are catastrophic. Men are important-men of good will."

He had been in the U.S. not long before, where he had visited President Eisenhower. He said the Americans, almost all of them, sympathized with his program, but he said he observed an attitude that all of the world&#39;s ills could be cured by gifts of money. He continued:

"With all the money in the world one cannot make men, but with men one can have anything, even money. ... In underdeveloped and backward countries, where misery abounds, the solution is not always to send money, but to send men &#8212; men of good will."

He also believes that a movement toward international good will begins with the world&#39;s youth. He suggested to the President that the youth of the world might be organized into some kind of a free civilian service during peacetime in which they could volunteer their services to build homes, to house. and feed the underprivileged and to teach.

Later, when he returned to Europe, Abbe Pierre went on a lecture tour. Again he emphasized that money was not everything. He told an audience of 2,000 in Zurich that Switzerland&#39;s traditional neutrality, through which the country has made tremendous financial gains in times of war and a basic factor in its economy, represented a false value, which one day might lead to the country&#39;s suicide.

"This was like throwing a stone in a duck pond," he&#39; said. Then he reached for his scrapbook and produced a clipping from one of Switzerland&#39;s most influential newspapers. It stated:

"For the first time in our history, we have been cruelly slapped in the face. But we are obliged to recognize that everything Abbe Pierre said is true. This champion of human welfare tells us the cruel truth &#8212; this is a businessmen&#39;s paradise."

As a step toward mobilizing youth to assist the unfortunate, Abbe Pierre already has selected a large building in Paris which will eventually house a university or training school which would specialize in "integral human geography." As he does not have funds for buying the building, it may be some time before students attend classes and begin to generate a program &#8212; such as he has been conducting in France &#8212; around the world.