From the S&S archives:A warm thanks to Japan 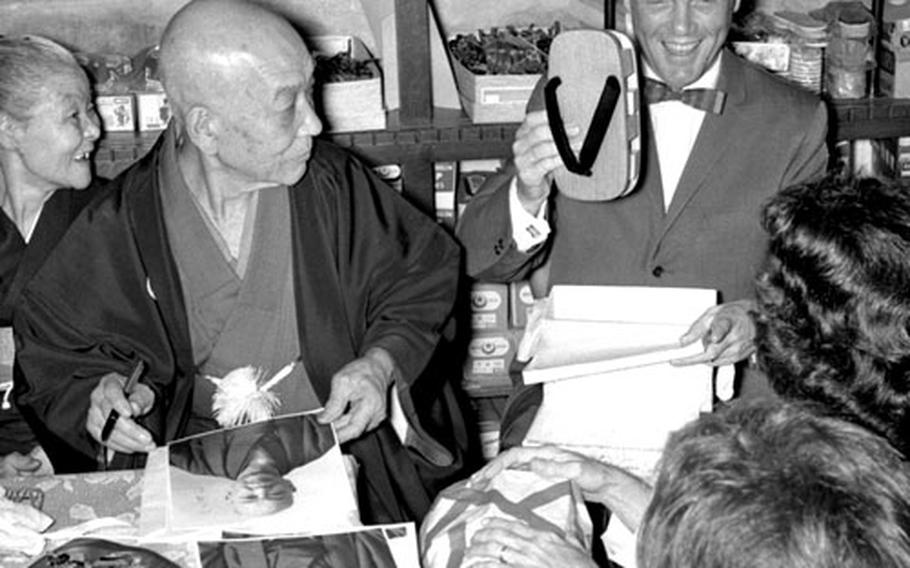 Buy Photo
Tokuzo Shibuya and his wife watch as astronaut John Glenn unwraps their gift, a pair of wooden clogs. (©Stars and Stripes)

"I shall always remember your kindness and thoughtfulness," Glenn told Tokuzo Shibuya. "It is a great honor to meet you."

Shibuya, who sent Glenn a Shinto prayer tablet to invoke divine protection before his flight, replied, "I am so very very happy to see you."

An applauding crowd of about 2,000 greeted the astronaut, his wife, Annie, daughter, Lyn and son, David, as they entered Shibuya&#39;s flag-draped geta (sandal) shop on the village main street.

During his half-hour visit Shibuya presented Glenn with a pair of geta (wooden clogs) and his wife with a pair of brocade zori (sandals). He also gave wooden Kokeshi dolls to Glenn&#39;s children.

"In my country we exchange gifts at Christmas time. This is the first time Christmas has come to us in May."

Displayed prominently in the geta shop was an autographed color photograph of Glenn which the astronaut sent to Shibuya after he received the prayer tablet.

Shibuya told Glenn, "I have always had a warm feeling for Americans. I sent the tablet to express my feelings to a real American."

After the visit, during which Glenn and his family drank green tea and ate Japanese cake, Glenn presented Shibuya with a pair of gold cuff links shaped like his spacecraft, the Friendship 7.

"Most of you know what Mr. Shibuya did for me. I appreciated very much his kindness and thoughtfulness."