From the Korean War to the Global War on Terrorism, Col. John Follansbee has answered the U.S. Army’s call again and again 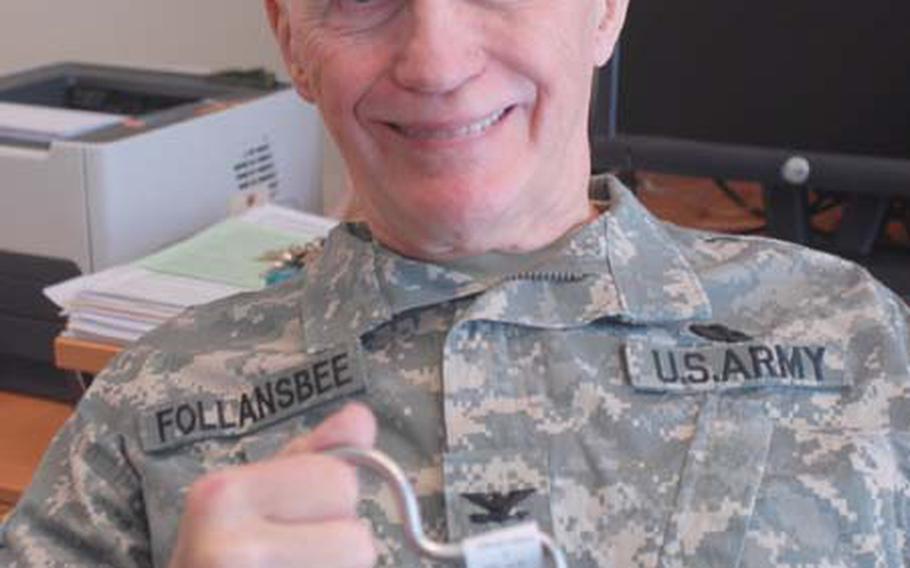 Col. John Follensbee&#39;s office is filled with mementos from a military career that began in 1953. Among the items is the emergency handle from a reserve parachute that he resorted to after his main chute failed during a jump in the 1960s. It includes a label that says, "Always have a Plan B." (Seth Robson / S&S)

Col. John Follensbee&#39;s office is filled with mementos from a military career that began in 1953. Among the items is the emergency handle from a reserve parachute that he resorted to after his main chute failed during a jump in the 1960s. It includes a label that says, "Always have a Plan B." (Seth Robson / S&S) 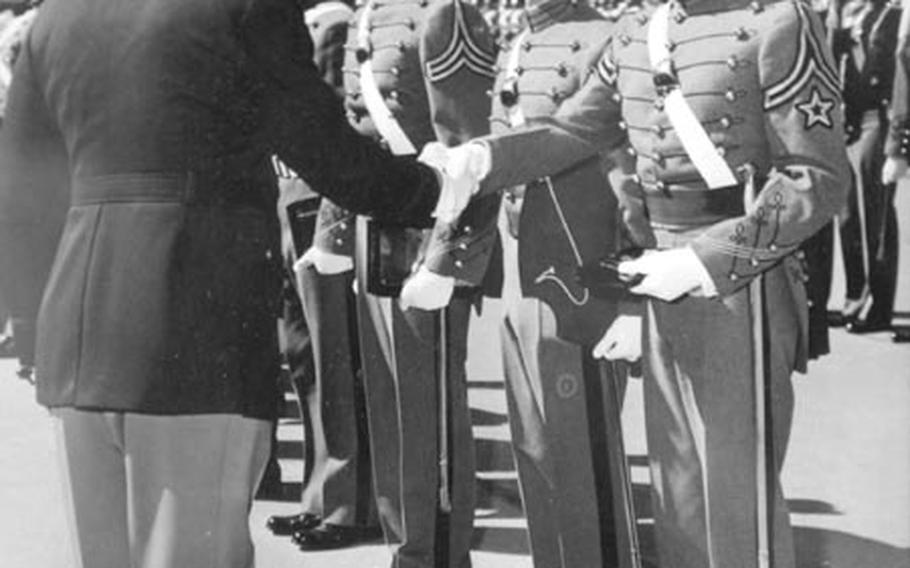 GRAFENW&#214;HR, Germany &#8212; When Col. John Follansbee joined the Army, in 1953, Eisenhower was president, the Korean War still raged, and conflicts like Vietnam, the Gulf War and the Global War on Terrorism were far in the future.

Fifty-six years later, Follansbee, 73, still puts on a green uniform each morning and heads to his job as a psychiatrist at the Grafenw&#246;hr Health Clinic, where he helps soldiers deal with post-traumatic stress disorder.

The West Pointer and former infantry officer is one of many older officers, mostly chaplains or doctors, recalled to active duty to boost force levels during a time when the Army is stressed from fighting two protracted wars.

The young cadet received the first of his four National Defense Service ribbons for serving during the Korean War. His others are for the Vietnam War, the Gulf War and the Global War on Terrorism.

In 2007, he attended his 50th West Point class reunion and discovered he was the only one of his classmates still on active duty.

The reason he&#8217;s still serving is because of a system that allows the Army to recall retired officers in times of need. Very old officers like Follansbee do not have to answer a recall, but he said he volunteered to serve in 1991, 2005 and, since June last year, for a two-year commitment.

The Army doesn&#8217;t require him to pass a physical training test but he said he runs for half-an-hour each night on a trampoline to stay in shape.

"I did 70 sit-ups yesterday," added the father of seven and grandfather of 13, during a break between patient visits on March 18.

After graduating from West Point as a second lieutenant in 1957, Follansbee embarked on a career as an infantry officer with the 25th Infantry Division, training as a Ranger and paratroop. The safety cord he pulled when his main parachute failed during a free-fall jump in the 1960s hangs on his office wall with a label that reads: "Always have a plan B."

In 1964, Follansbee took administrative leave to study medicine at Cornell University. After obtaining his medical degree, he studied psychiatry and treated casualties at Walter Reed Army Medical Center during the Vietnam War.

"I remember rushing down when the Vietnam wounded came in to perform debridement (removing pieces of uniform and other debris lodged in the soldiers&#8217; wounds)," he recalled.

It was during Vietnam that Follansbee first encountered troops suffering from post-traumatic stress disorder.

"There was no programmatic approach to PTSD in Vietnam. It was catch as catch can. We were using old techniques, which are now pretty much discredited," he said.

Vietnam-era psychiatrists tried traditional psychotherapy as a treatment for PTSD. They also tried sedating victims, then interviewing them about their experiences. However, neither technique was effective, Follansbee recalled.

In a long career, which included an initial posting to Germany in 1975, he&#8217;s treated PTSD sufferers from the Gulf War, the Balkans conflict and Somalia, along with British Iraq and Afghanistan veterans at civilian hospitals in Northampton, England, where he lived with his British wife before being recalled last year.

In the year since he came to Grafenw&#246;hr, he&#8217;s treated more than 150 soldiers for PTSD. With two combat brigades stationed in the garrison, the 2nd Stryker Cavalry Regiment (recently back from Iraq) and the 172nd Infantry Brigade (currently deployed to Iraq), he&#8217;s not likely to run out of patients any time soon.

Psychotherapy for PTSD has come a long way since Vietnam, Follansbee said.

"We have psychotherapies, which are very effective with an 80 percent remission rate," he said.

One technique, called "prolonged exposure," involves recording interviews with soldiers about their combat experiences. The soldiers listen to the recordings as homework and recite the story over and over again, he said.

"The aim is to touch the underlying feelings, which usually have to do with grief and remorse, and help them accept those emotions as reasonable responses to an unreasonable situation," he said.

PTSD sufferers are asked to expose themselves to situations they try to avoid, he added.

"They avoid anything that reminds them of the war. They don&#8217;t like crowds. They say they are mentally still back in Iraq because they can&#8217;t keep their eye on everything. The PX becomes a real problem. The checkout line is a trap," he said.

Some of Follansbee&#8217;s West Point classmates are envious of his continued service.

"I guess we are envious of John because he is up to his duties," he said.

Follansbee is able to perform in a specialty, psychiatry, that is in short supply in the military, McCarthy said.

"I believe an experienced psychiatrist would have more success working with soldiers with combat mental problems than a younger one. This comparison is like: &#8216;Who would you like flying that plane into the Hudson River, a young pilot or that gray-haired, old Captain Sully?&#8217; " he said, referring to the recent successful ditching of a civilian airliner in the river by a former military pilot.

"If he is physically and mentally fit, then he should serve as long as there is a need and the willingness to do so," McCarthy said, but added that combat arms and staff positions are still jobs for young men.

"In his case, I think age should not be a disqualifying factor as long as the Army needs him and he is able to successfully perform in his medical specialty," he said.

However, Stokes said he wouldn&#8217;t recommend having too many soldiers continue on active duty into old age because such a policy can block career opportunities for younger officers.

"The Army probably learned a lesson after World War I when they kept some of the old geezers on active duty until World War II loomed on the horizon. This process seriously blocked the career paths (and experience factor) of younger officers who waited for years as company-grade officers until they could rise in rank. Perhaps with this in mind, a few years beyond World War II, mandatory retirement (based on age, grade and time-in-grade) was put in place," he said.