From soldier to diplomat, for Lt. Col. Kurt Pinkerton, it’s all in a day’s work 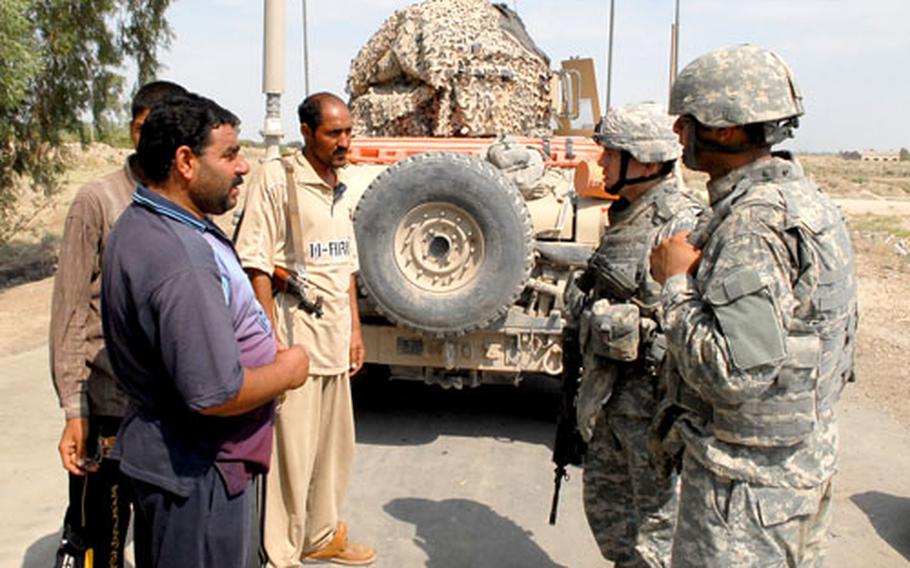 Lt. Col. Kurt Pinkerton talks to several "Volunteers" at their checkpoint in Nasr Wa Salam on Aug. 19. The Volunteers are local residents who have teamed with American forces to provide security in the area. The mostly Sunni civilian watch has had some friction with some of the Shiite Iraqi Army units in the area. (Zeke Minaya / S&S)

Lt. Col. Kurt Pinkerton talks to several "Volunteers" at their checkpoint in Nasr Wa Salam on Aug. 19. The Volunteers are local residents who have teamed with American forces to provide security in the area. The mostly Sunni civilian watch has had some friction with some of the Shiite Iraqi Army units in the area. (Zeke Minaya / S&S) 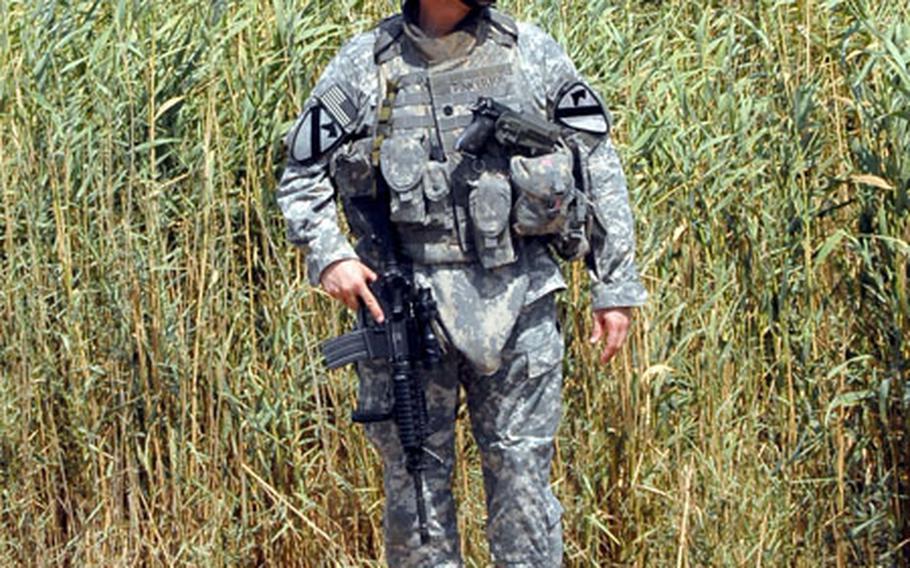 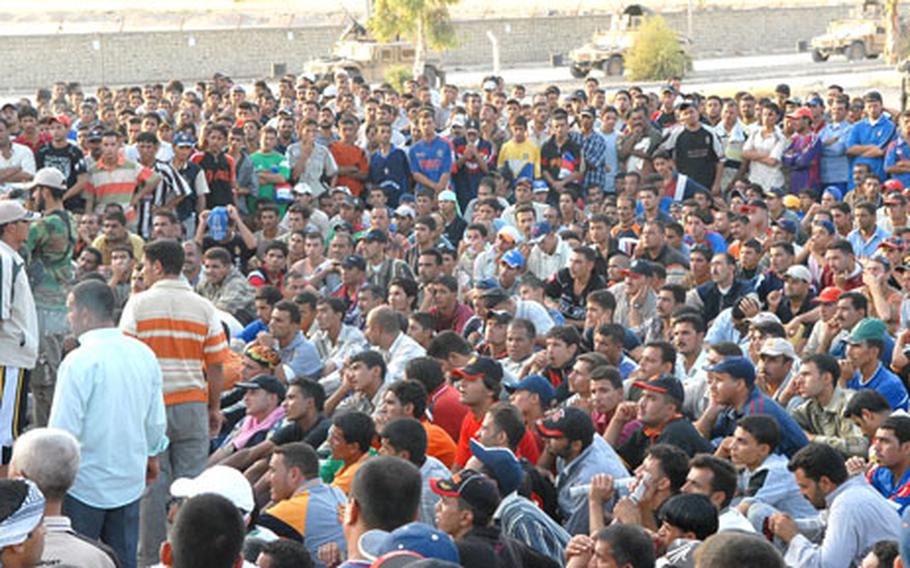 Iraqi police recruits wait for an airlift to the training facility in central Baghdad at the Nasr Wa Salam station on Aug. 19. Some 1,000 potential recruits arrived to turn in applications. (Zeke Minaya / S&S)

BAGHDAD &#8212; The sun had only been up a couple of hours when Lt. Col. Kurt Pinkerton and his soldiers drove through Camp Liberty heading outside the wire. Pinkerton would return to his headquarters in the predawn darkness after a typical 18-hour marathon of a day that took him to virtually every corner of his battlespace in western Baghdad.

Long days are not rare for U.S. soldiers, of any rank. But Pinkerton assumes several roles &#8212; soldier, diplomat, civic booster.

The first stop for the 41-year-old Californian was just outside the Green Zone. Pinkerton, who commands the Fort Hood, Texas-based 2nd Battalion, 5th Cavalry Regiment, was scheduled to meet with local leaders and residents of the western Baghdad community of Abu Ghraib.

Sectarian violence may have been eased by the Baghdad security plan, but factional rivalries still burn in the political arena. The Baghdad provincial governor recently moved to replace the Abu Ghraib city council, a Sunni-dominated body, with a mostly Shiite slate. The gathered contingent, crammed into a conference room, vented its outrage to Pinkerton.

A crowd followed him from room to room seeking a final word. An exit that could take five minutes stretched to nearly half an hour.

Back into the Humvees and with midday approaching, Pinkerton&#8217;s convoy drove about 30 miles northwest to the dusty, rural outskirts of Baghdad. Near the small village of Shortan, Pinkerton&#8217;s unit is establishing an outpost and insurgents are still testing their new neighbors.

The small two-story house had received mortar fire in the past few days as troops converted the meager family farm into a combat outpost. Chickens pecked at bald patches of dirt as Pinkerton toured the grounds.

First Sgt. Eric Marquez, 43, has been leading the renovations and told Pinkerton that outside of security, water quality is among his top concerns.

Setting up the outpost is serious business. It&#8217;s near the intersection of three provinces &#8212; a well-travelled alley for al-Qaida in Iraq between Baghdad and training grounds in the northern desert.

Pinkerton boarded his vehicle and began a tour of nearby checkpoints. On guard was a recently established group of deputized civilians called the &#8220;Volunteers.&#8221; The mostly Sunni force has teamed with the U.S. military in the area after bristling under the restrictive demands of extremist Islamic insurgents.

Capt. Larry Obst, who has worked with Volunteers in the area of Nasr Wa Salam, said he has seen the benefits.

But the Shiite-dominated government in Baghdad has expressed concern over the creation of armed civilian groups. There have been tensions in Pinkerton&#8217;s area between local Iraqi security forces &#8212; mainly Shiites &#8212; and the Volunteers.

In the last few days, the unease has threatened to boil over after three Iraqi Army checkpoints were attacked and Iraqi military leaders began pointing fingers at the civilian watch.

Pinkerton has worked to calm the situation, having introduced the Baghdad provincial governor to the Volunteers&#8217; leader, Abu Azzam, just a week before the attacks. But the calm is fragile.

&#8220;Have you been fired on?&#8221; Pinkerton asked several men at one checkpoint. The men, wearing track suits and carrying automatic firearms, said that there had been no gunfire. Although they are called Volunteers, the group will receive some pay from the U.S. military. Pinkerton told them that they would soon see the first of the money.

At the Iraqi police station in Nasr Wa Salam, Pinkerton arrived to find a crowd of roughly 1,000 Iraqi men. They were local residents who had applied to become police officers and were now waiting for an airlift to the training academy in Baghdad.

Pinkerton has made it a cornerstone of his efforts in the area to increase the ranks of police and he was eager to see them off on the first day of their training.

Having waited for the better part of a day in the hot sun, the Iraqi recruits were thirsty and testy. They were arranged into groups but often broke rank to ask American soldiers for water. It had been a long day for everyone, and tempers began to flare.

For a moment, the recruits forgot their discomfort and loudly applauded and cheered. Sometime after midnight, the first of the helicopters arrived. Pinkerton walked along with the first recruits as they boarded the aircraft, taking pictures as he went.

By the time Pinkerton and his men returned to camp, it was roughly 2:30 a.m.

Only a handful of hours away from getting up and doing it all over again.