From Russia with a price tag: Coronavirus aid arrives in US 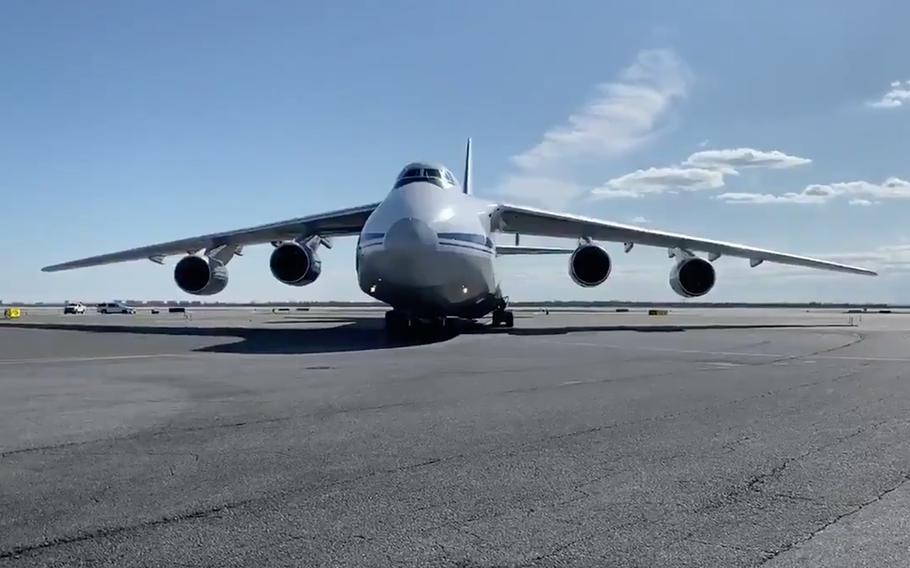 A screen shot from Russia?s @natomission_ru Twitter account shows a Russian Ruslan AN-124-100 arriving at John F. Kennedy airport in New York with 60 tons of medical equipment on board, April 1, 2020. (Twitter/@natomission_ru)

Medical supplies sent by Russia to help the U.S. fight the coronavirus have arrived in New York, but the relief gear came with an undisclosed price tag.

“Both countries have provided humanitarian assistance to each other in times of crisis in the past and will no doubt do so again in the future,” Ortagus said Wednesday. “This is a time to work together to overcome a common enemy that threatens the lives of all of us.”

While Ortagus said the U.S. paid for the equipment, she didn’t mention how much was spent.

On Wednesday, the Russian government was trumpeting the delivery of the medical equipment on social media, saying the aid would save American lives.

The deal has raised concerns among some Russia critics, who say Moscow, along with China, is exaggerating the role it is playing in the global response to the coronavirus crisis.

The two nations have provided masks, ventilators and other medical equipment to several countries hit by the pandemic. Together with Cuba, they have also dispatched medical teams to help out in places such as Italy, which has the highest mortality rate from the virus, and Serbia.

The Russian supplies, which filled a cargo plane, arrived in New York amid warnings from Trump that between 100,000 and 200,000 Americans could die from the disease caused by the virus — a turnaround from a statement he made on Twitter in late February that “the coronavirus is very much under control in the USA.”

New York state had 83,712 confirmed cases of coronavirus as of Wednesday, or 40% of the national total, according to New York Magazine. More than 47,000 of the cases were in New York City.

As the pandemic surges across the U.S., there were concerns about dwindling stocks of medical supplies, such as ventilators, which are needed to treat people who come down with the severe lung disease caused by the virus. U.S. government emergency stockpiles of protective equipment like masks and gloves are also nearly depleted, a senior U.S. official told The New York Times Thursday.

Ortagus said the U.S. “cannot do it alone” and must work with other countries “to ensure that critically needed supplies get to those in need.”