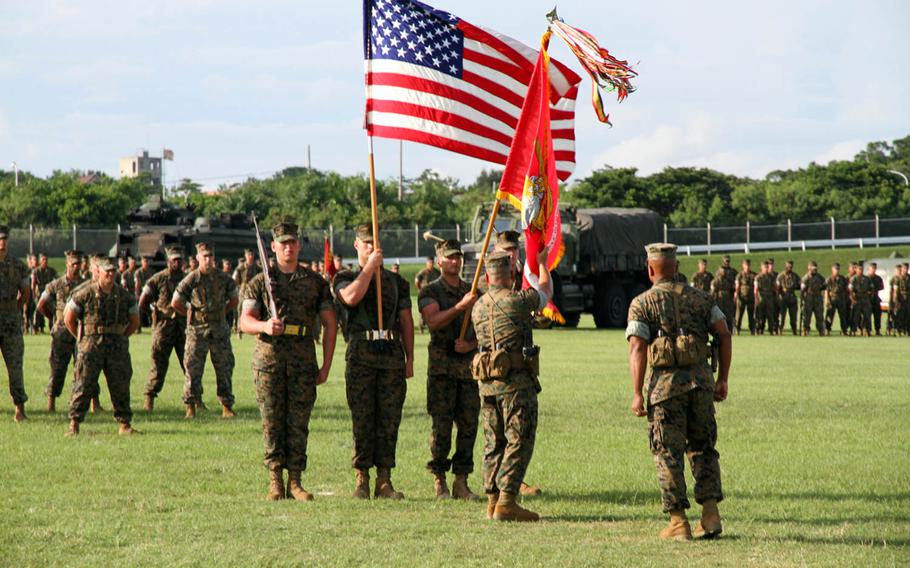 The 3rd Marine Division's battle streamers catch the wind as they are raised for the first time since being rededicated during a ceremony celebrating the division's 75th anniversary at Camp Hansen, Okinawa, Friday, Sept. 8, 2017. (Matthew M. Burke/Stars and Stripes)

The 3rd Marine Division's battle streamers catch the wind as they are raised for the first time since being rededicated during a ceremony celebrating the division's 75th anniversary at Camp Hansen, Okinawa, Friday, Sept. 8, 2017. (Matthew M. Burke/Stars and Stripes) 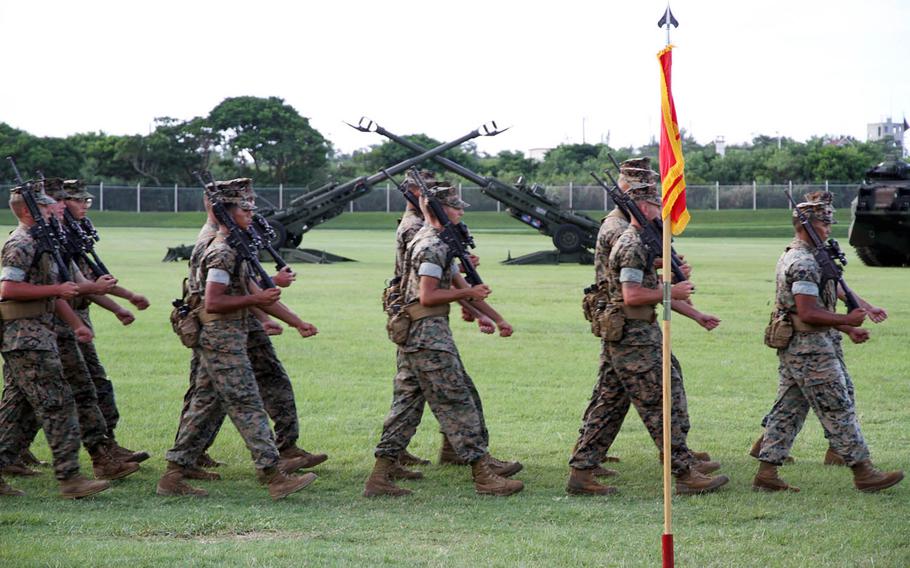 CAMP FOSTER, Okinawa — The Marine division that fought the fierce and bloody battle to capture Iwo Jima during World War II recently celebrated its 75th anniversary with a ceremony at Camp Hansen.

Since its activation on Sept. 16, 1942, the 3rd Marine Division has fought in every major U.S. military conflict, and stands today as the nation’s only forward-deployed Marine division with more than 10,000 Marines, sailors and one soldier filling out its ranks.

And it was only fitting that members of the division, headquartered on Okinawa, were forced to endure suffocating humidity and driving rains — conditions familiar to their Pacific forefathers — while rededicating their battle streamers Friday at Camp Hansen’s parade grounds.

Timberlake then spoke about the significance of the division known as Caltrap Nation because of its use of the sharp, pointed anti-personnel weapon as a symbol.

“Today, by having this anniversary celebration, we are truly marching in the shadow of a great tradition,” he said. “From the Pacific to Vietnam, to the deserts of Iraq and Afghanistan, to the global war on terrorism and beyond, the Caltrap Nation has truly done everything it should do in the finest of Marine fashions. So today, along with our Japanese partners and allies, we stand strong; we stand ready and we are prepared to win.”

The division colors were stripped of their decorations and awards for the ceremony. Marines representing the division’s various units marched one by one out onto the parade grounds, stood before Timberlake and division Sgt. Maj. Vincent Santiago and saluted. They then handed the battle streamers to their leaders.

Santiago held the flag and lowered it, and Timberlake hanged the decorations and awards.

After being activated at Camp Elliott, Calif., the division spent a month in New Zealand before participating in the harrowing Bougainville, Northern Solomons, Guam and Iwo Jima campaigns, according to literature handed out at the ceremony. After the war, it was deactivated, but was called back into service in 1952. By 1965, its members were deployed from Japan to Vietnam.

The division served in Quang Tri, Quang Nam and Thua Thien provinces, the literature said. In 1969, it redeployed to Okinawa; however, elements participated in the evacuations of Vietnam and Cambodia.

Between 1976 and 2006, the 3rd Marine Division participated in Desert Shield, Desert Storm, Enduring Freedom and Iraqi Freedom, in addition to countless other operations and humanitarian-relief efforts. It has been awarded the presidential unit citation and countless other commendations.

Marine Sgt. Joshua Hughley said it was an honor to witness such a historically significant milestone in the division’s history.

“I didn’t know the significance of being here until I got here and got the history on the 3rd Marine Division,” he said. “It’s an honor and a blessing [to serve in this division].”

Cpl. Nicholas Waurio of Camp Lejeune’s 1st Battalion, 8th Marine Regiment said he had to hand it to the Marines who served in the division during World War II for overcoming brutal conditions to achieve victory. Waurio, who is attached to the division through the Unit Deployment Program, said he and his fellow grunts train hard to keep Caltrap Nation’s traditions alive.

“There’s so much history behind 3rd Marine Division,” he said. “It’s awesome to be a part of it whenever we come here.”