From Humvee to half-track in seconds: Researchers show off new combat vehicle 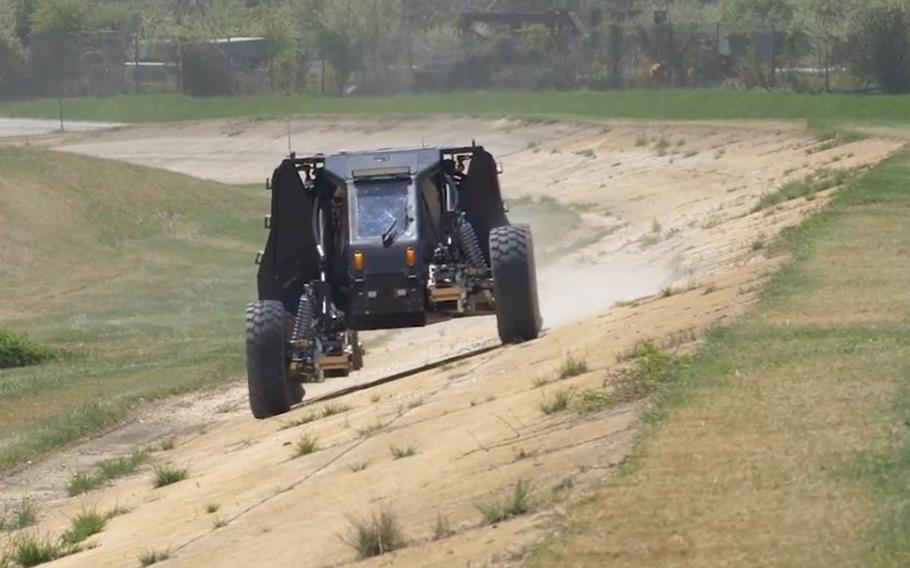 A prototype of the Ground X-Vehicle Technologies program showcases a new suspension system with 6 feet of travel that could one day be used in Military Tactical Vehicles. (Courtesy of DARPA)

The Defense Department has demonstrated a Humvee that can transform from a four-wheel-drive to a half-track in seconds.

The ability to turn a Humvee into a half-track along with some other nifty upgrades could one day allow combat vehicles to travel across 95 percent of battlefield terrain features, the Defense Advanced Research Projects Agency, known as DARPA, said in a statement.

A YouTube video of the space-age combat vehicle performing its trick, posted by DARPA this month, has been viewed 2.1 million times in five days.

The Humvee is part of a program called Ground X-Vehicle Technologies (GXV-T) that “aims to improve mobility, survivability, safety, and effectiveness of future combat vehicles without pilling on armor,” according to DARPA.

“We’re looking at how to enhance survivability by buttoning up the cockpit and augmenting the crew through driver-assistance aids,” Maj. Amber Walker, the GXV-T program manager, said in the statement. “For mobility, we’ve taken a radically different approach by avoiding armor and developing options to move quickly and be agile over all terrain.”

Researchers showed off the transformable Humvee at the Army’s Aberdeen Test Center in May.

Its “Reconfigurable Wheel-Track” can assume a round shape for high-speed travel on roads, then shift to a triangular shape creating “treads” that improve off-road performance.

Other innovations include electric hub motors inside the wheels. The technology, already powering electric supercars in Europe, improves acceleration and maneuverability by optimizing torque, traction, power and speed, according to DARPA.

The suspension boasts 6 feet of travel — 42 inches upward and 30 inches downward — and keeps itself level on steep grades by adjusting each wheel.

The video of the Humvee in action shows a driver using a headset that provides a 360-degree view around a vehicle to navigate obstacles. The goal is to eliminate the need for windows in tactical vehicles, according to DARPA’s statement.

The transformable Humvee is equipped with a computer that can predict the fastest and safest route to a given destination and even take control to drive around obstacles.

“I love most of those ideas, and the tech behind it is incredible,” Army Staff Sgt. Jason Hale, a section chief in the 160th Field Artillery, 45th Infantry Division, said in a phone interview Thursday. “The thought of Joes going into a dangerous valley in Kunduz riding in an up-armored, gator-like vehicle that has the suspension of a monster truck is really amazing.”

Hale, who recently returned from a deployment to Afghanistan, added that any new military vehicle technology will have to be durable and affordable to really help a deployed soldier.

“Affordability is always the name of the game, and a private with hyper-situational awareness will always be cheaper and more effective than a $30 million truck,” Hale said.