From high above, Aussies control access to Baghdad airport 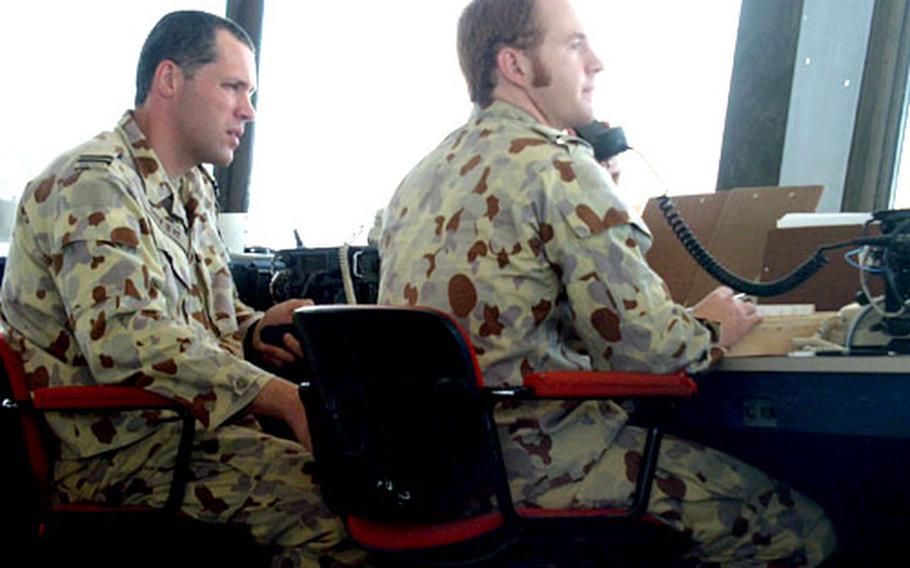 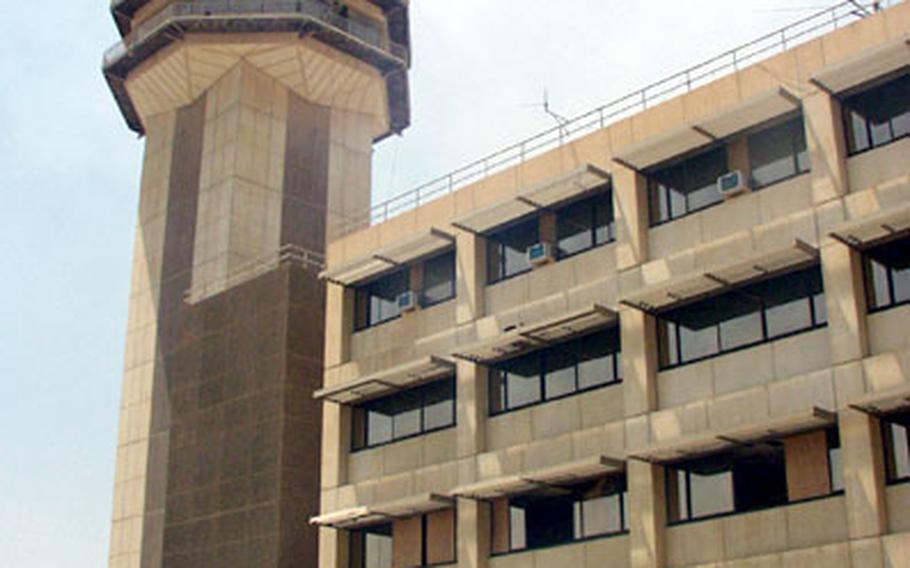 The 12-story air traffic control tower at Baghdad International Airport is home to a small contingent of Australian air force personnel who are responsible for getting all aircraft safely in and out of the base. (Kent Harris / S&S)

BAGHDAD, Iraq &#8212; Pilots guiding military aircraft on the long flights into Baghdad International Airport might be forgiven if they briefly feel they&#8217;ve strayed off course.

Thousands of miles off course: to a land far to the southeast known for kangaroos, koala bears &#8230; and air traffic controllers?

At a base in Iraq that formerly housed Saddam Hussein&#8217;s private jets, Americans are everywhere. It&#8217;s probably the largest concentration of U.S. troops in Iraq. But it&#8217;s the Australian air force that&#8217;s been tasked with bringing flights safely in and out of the airport.

Wing Commander Ian Browning, who heads the 62-member force, said the decision to send his unit to Iraq was made by those far above his pay grade (for those unfamiliar with Australian ranks &#8212; he&#8217;s the equivalent of a lieutenant colonel). But he says it makes perfect sense to him.

&#8220;I think Australia brings something unique to the table,&#8221; he says, referring to his crew&#8217;s experience with different aircraft &#8212; not the Aussie accent that sometimes bewilders their American counterparts.

The Australians replaced a U.S. Air Force team in late April. They brought all their own equipment with them because the tower &#8212; and the huge four-story building that it&#8217;s built on &#8212; was largely gutted. After a lot of cleaning, they now live in the building, getting much of their food and water from their American colleagues.

Browning says that although many individuals from the team will rotate out in a few weeks, the Australians are set to continue with operations until they&#8217;re replaced by civilian contractors, probably around the end of the year.

Aussie air controllers, who make up only about one-fifth of the force, are in the 12-story tower around the clock, guiding in hundreds of flights each day. U.S. Air Force personnel also stationed on base handle the long- range surveillance and communications with aircraft over Iraq.

Much of the traffic that the tower handles comes from the U.S. military. But there&#8217;s also a good deal of civilian traffic in the form of humanitarian flights. The Coalition Provisional Authority has expressed hope that commercial flights &#8212; which would likely be only a few a day &#8212; might start later this month.

There are two runways at the airport and the plan is to shift all military operations to one side and have civilian craft use the other.

For someone who&#8217;s been putting in constant 14-hour days in the tower, Squadron Leader Stephen Edgeley seems to smile way too much. He says that&#8217;s because he&#8217;s doing a job he likes.

But Browning, whose unit consists of personnel taken from across Australia, says there&#8217;s probably only three airports in his country &#8212; Sydney, Melbourne and Brisbane &#8212; that regularly handle as much traffic as his controllers do in Baghdad.

On the military side, Air Force cargo planes carry the bulk of material and new arrivals onto the base. But as far as the number of flights go, it&#8217;s helicopters attached to the 1st Armored Division&#8217;s 4th Brigade that grab the lion&#8217;s share.

Because of that, the Army has a liaison stationed in the tower around the clock.