The 4th Infantry Division Mission Command Element headquarters in Baumholder, Germany, is the planning hub for U.S. Army Europe's involvement in Operation Atlantic Resolve. The headquarters is also working on plans to facilitate a rotational heavy brigade, with some 5,000 soldiers, scheduled to arrive next year. (Michael B. Keller/Stars and Stripes)

The 4th Infantry Division Mission Command Element headquarters in Baumholder, Germany, is the planning hub for U.S. Army Europe's involvement in Operation Atlantic Resolve. The headquarters is also working on plans to facilitate a rotational heavy brigade, with some 5,000 soldiers, scheduled to arrive next year. (Michael B. Keller/Stars and Stripes) 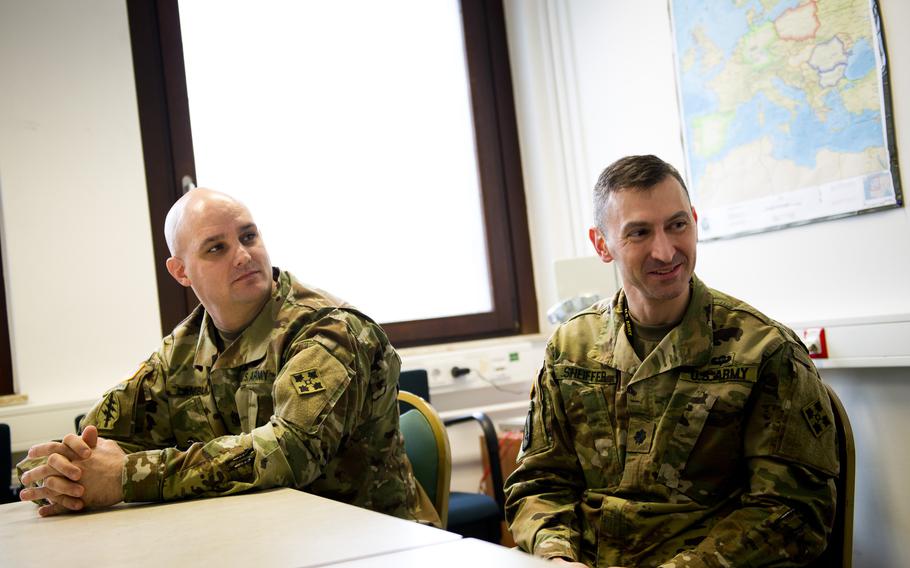 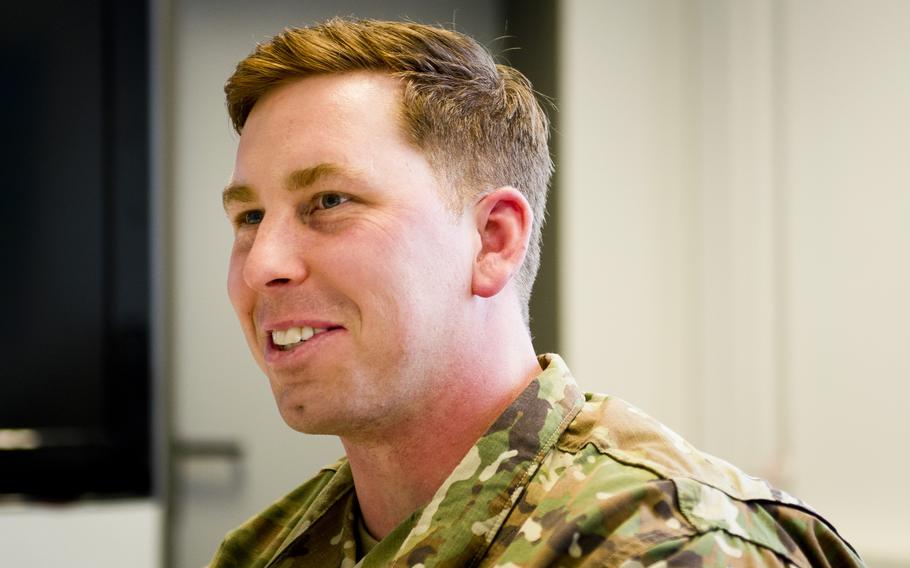 Capt. Kyle Edseth, from the 4th Infantry Division's Engineer Cell, talks about possible infrastructure upgrades to facilitate the addition of an incoming rotational heavy brigade to Europe that is scheduled to arrive next year. (Michael B. Keller/Stars and Stripes) Capt. Ryan Brence, 4th Infantry Division civil affairs operations officer, describes the importance of building relationships with European allied military units and communities for current operations, and ahead of a planned influx of some 5,000 soldiers due to arrive in 2017. (Michael B. Keller/Stars and Stripes) 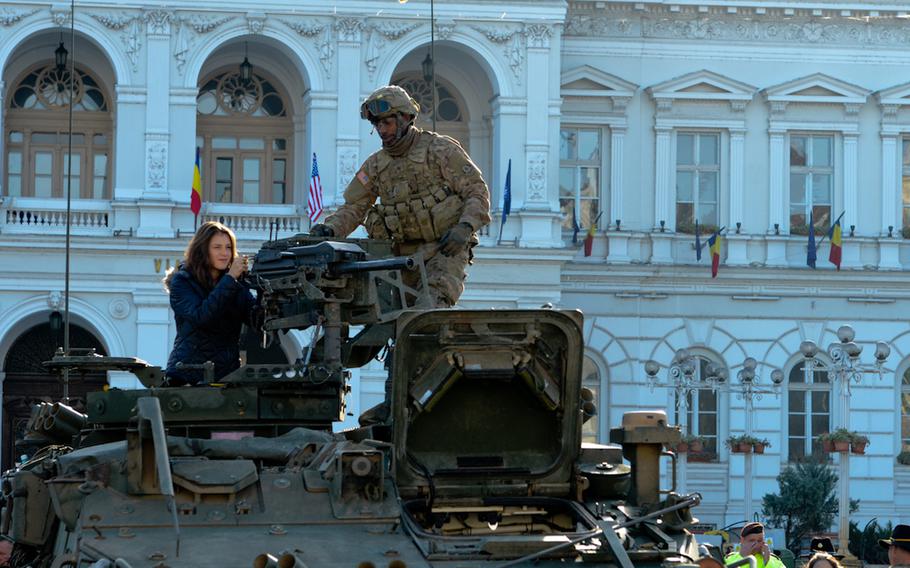 A cavalry sergeant from the 4th Squadron, 2nd Cavalry Regiment, informs a Romanian woman about a Stryker military vehicle in Arad, Romania, Oct. 25, 2015, as part of Exercise Dragoon River Crossing. The exercise took place across Estonia, Latvia, Lithuania, Poland and Romania to strengthen relationships among allied militaries. The U.S. will be beefing up its presence in eastern Europe in 2017 with the addition of a rotational brigade. (Caitlyn Byrne/U.S. Army) 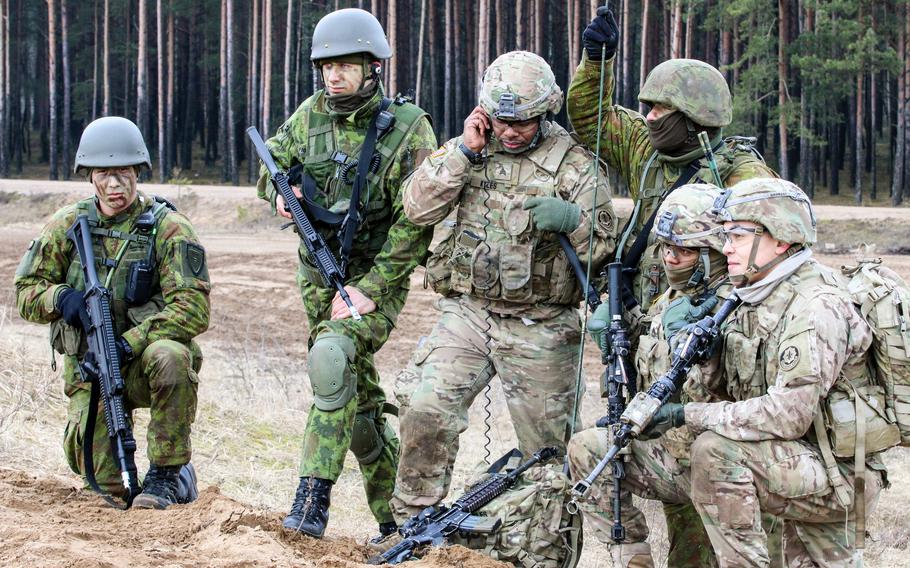 With the arrival in Europe next year of more infantrymen, tanks and artillery, the new headquarters in this tiny German garrison town is turning into the Army’s European nerve center.

For the past six months, about 100 troops from the 4th Infantry Division out of Fort Carson, Colo., have been operating from a new home in Baumholder, adding a sense of operational urgency to a sleepy Army post that a generation ago housed nearly 30,000 combat troops.

The team, known as the 4 ID Mission Command Element, serves as the command and control hub for U.S. Army Europe’s role in Atlantic Resolve.

Now, the mission to beef up the U.S. military’s presence in allied countries along Russia’s periphery is entering a new phase. The Army is gearing up for the nonstop presence next year of a heavy brigade — about 5,000 soldiers — along Europe’s eastern edge. Troops rotating in from the United States are to be dispatched on nine-month deployments.

The hard part is putting the plan into action. Where will all the soldiers live? Will the roads on bases in Europe’s east support 63-ton tanks? What about chow and quality of life for troops whose rotations are now going to get considerably longer than the previous 90 day cycles?

“It’s all about planning for that next unit,” said Capt. Bill Morgan, battle captain for the forward stationed 4th Infantry Division headquarters in Baumholder. “Now we’re looking at it from a nine-month perspective instead of a 90-day rotation.”

At the Baumholder headquarters, soldiers are crunching numbers and arranging contracts for renovations and construction of living quarters to ensure bases in the region can house larger units.

“How are we going to bring that from semi-permanent to something more permanent? We want to set ourselves up for success,” said Capt. Kyle Edseth, part of 4th ID’s engineering cell in Baumholder. “We’re going to look to build those kinds of facilities. We’re in the beginning of something here.”

The planned 2017 addition of a rotational heavy brigade in Europe — part of a $3.4 billion Pentagon proposal to beef up operations on the Continent — means that USAREUR now will have a constant presence of three full brigade’s at all times, backing up the Vilseck, Germany-based 2nd Cavalry Regiment and the 173rd Airborne Brigade, out of Vicenza, Italy. The Europe-based units have carried the bulk of the Army’s load in the Baltics and Poland, with smaller rotational units providing a boost.

The return of a third brigade comes just over four years after the 170th Infantry Brigade cased its colors at Baumholder, one of two HEAVY brigades removed from Europe as part of a push to reduce the U.S. footprint in Europe, where the end of the Cold War had seemed to eliminate a perceived threat. That changed in 2014 when Russia annexed Ukraine’s Crimea peninsula.

With a shift from light units to heavy brigades in eastern Europe next year, there will be demand for more motor pools as well as improved ranges and roads on training grounds in Europe’s east.

For the 4th ID Mission Command Element, the job also centers on overseeing the day-to-day movement of Army troops who have been a constant presence in the Baltics and Poland since Russia’s intervention in Ukraine, which upended post-Cold War military assumptions about peace and security in Europe.

On any given day, the 4th ID headquarters in Baumholder will monitor and coordinate a range of missions, such as small unit-level live fires in the Baltics, road marches that traverse several European countries and massive war games such as the upcoming Anakonda 2016 in Poland.

At the start of the Army’s push into the Baltics, which began with the rapid deployment of the 173rd shortly after Russia’s annexation of Crimea, managing the day-to-day Army operations in the region fell to USAREUR. But as the mission grew, USAREUR needed reinforcement in the form of a deployable headquarters, something the Army in Europe has lacked for years.

In came the 4th ID, which in February 2015 took up residence in Grafenwoehr, Germany, before heading to Baumholder in October.

“What was missing was someone to stir the pot,” said Lt. Col. Matthew J. Sheiffer, chief of staff for the mission command element.

During the past year, the 4th ID headquarters, in coordination with USAREUR, has built up a dossier for operating along NATO’s eastern flank, mapping the terrain to ensure large units can maneuver in countries that historically have had limited numbers of Western forces. That involves hundreds of pages of new standard of operation procedures that detail everything from customs regulations for moving ammo to engineering analysis of roadways and bridges. The overarching aim: ensure freedom of movement for U.S. forces.

For now, it is unclear whether 4th ID will remain in place in Baumholder, or at some point hand off to another U.S.-based division to backfill the job should Atlantic Resolve continue in the years ahead.

“All we know is that we have the mission for now,” Sheiffer said.

Meanwhile, for troops who have been circulating through Baltic bases on 90-day missions, living conditions have steadily improved, said 1st Lt. Bennett Holcomb, who serves as a liaison officer at the headquarters between the 4th ID and a squadron of troops from the 2nd Cav now operating in the region.

The top issues for the troops in the field: faster wireless internet service, better chow and more gym equipment, said Holcomb, who in 2014 was among the first troops to deploy to the Baltics with the 173rd Airborne.