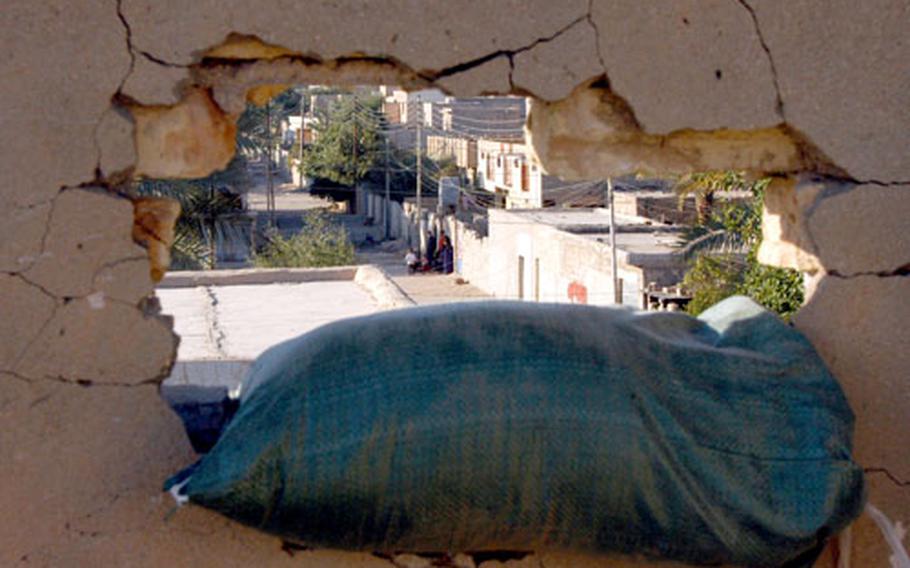 Through a hole on the roof of Combat Outpost Steel, U.S. soldiers can keep an eye on the Ramadi suburb of Ta’meem, where roadside bombs and sniper attacks have been regular occurrences. (Charlie Coon / S&S)

Through a hole on the roof of Combat Outpost Steel, U.S. soldiers can keep an eye on the Ramadi suburb of Ta’meem, where roadside bombs and sniper attacks have been regular occurrences. (Charlie Coon / S&S) 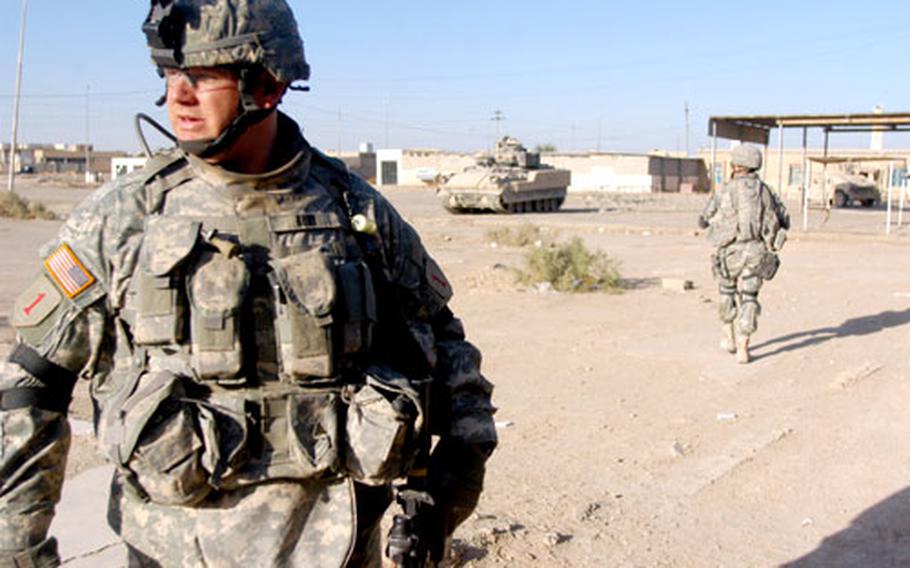 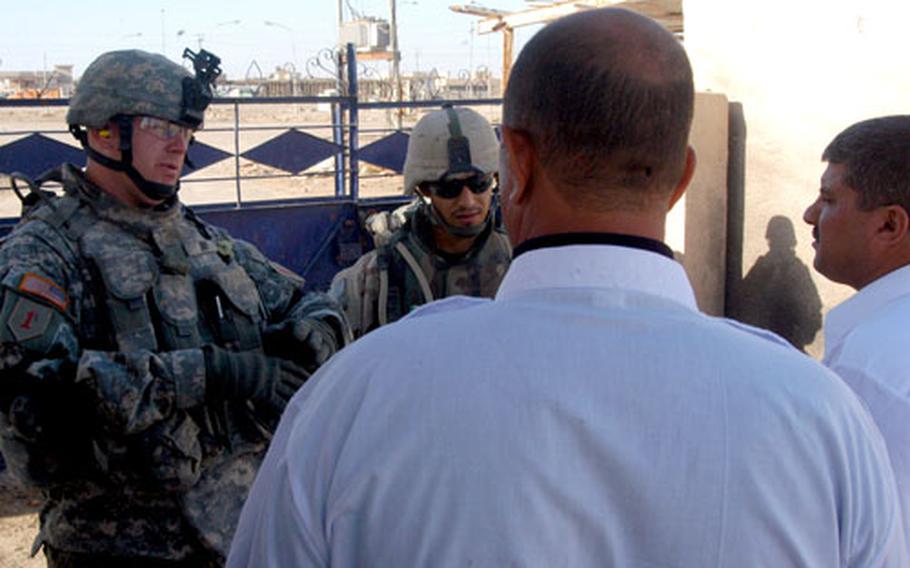 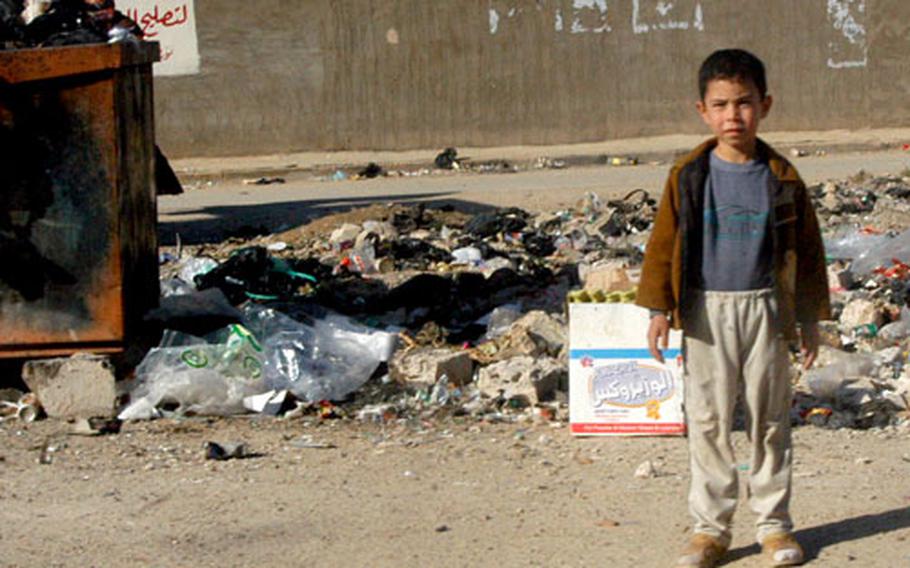 A young boy watches a U.S. military armored Humvee as it drives down a street in Ta’meem, Iraq. (Charlie Coon / S&S) 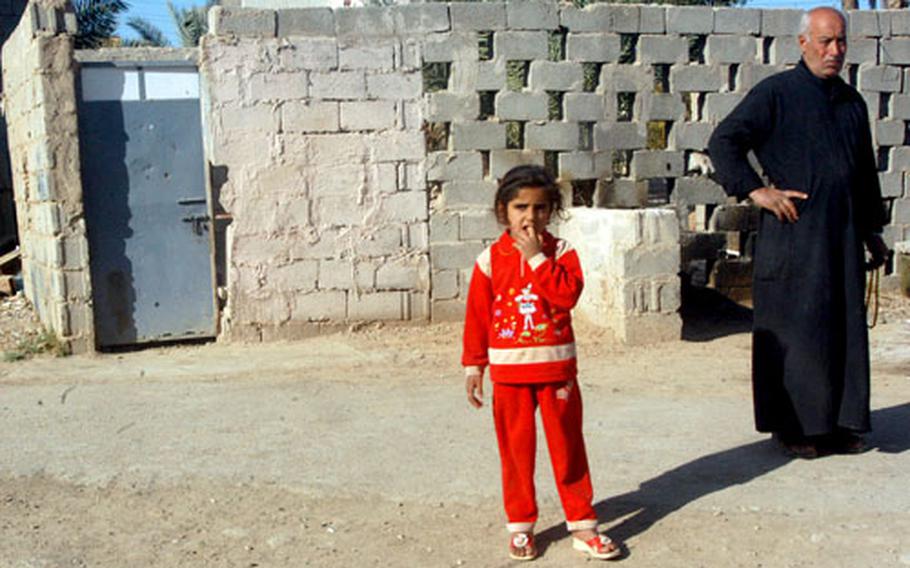 A young girl and a man watch a U.S. military armored Humvee as it drives down a street in Ta’meem, Iraq. (Charlie Coon / S&S)

Not if they don&#8217;t have to. Not even with Kevlar helmets, bulletproof vests, and shatter-resistant goggles.

The plan to fix the mess in Ta&#8217;meem and turn the town back over to Iraqi soldiers, Iraqi police and its 25,000 legitimate residents centers around a place called Combat Outpost Steel.

It&#8217;s a fortress that opened on Oct. 12 in the middle of Ta&#8217;meem from where soldiers of the 1-18 and an Iraqi battalion work. The plan is to use the inkblot strategy: Set up shop in the middle of hostile territory and make things right, one block at a time.

COP Steel and its soldiers will stay put until the snipers and bombers are swept out of town.

Ta&#8217;meem&#8217;s residential area is less than two miles long and a mile wide. It&#8217;s not fraught with the Shiite vs. Sunni sectarian violence that plagues Baghdad and other areas. There is a skeletal industrial zone and nearby, a barely functioning university. Many who used to work in factories and attend the university live here.

Perhaps by the end of the Predators&#8217; yearlong tour, COP Steel will become an Iraqi army base or police station.

But for now the 1-18 soldiers largely communicate with the children of Ta&#8217;meem by waving through the bulletproof glass of their armored vehicles, from which the soldiers of COP Steel do much of their daytime work.

Keeping a lookoutSoldiers park at key intersections and watch for people acting suspiciously, such as digging holes for roadside bombs.

Soldiers use the evening to do &#8220;census missions,&#8221; knocking on doors and introducing themselves. Residents are asked through an interpreter how many people live there, which mosques they attend, if they have jobs, and if they have issues that need to be addressed.

The Iraqi soldiers, who work with U.S. military advisers, do patrol the neighborhood on foot. They oversee about 20 percent of Ta&#8217;meem. Since they speak the language, they have a natural advantage, said Marine Sgt. Timothy Embree, of Military Transition Team 10, which advises the Iraqi battalion.

Embree said the locals have reacted favorably to the Iraqi soldiers, and to Americans such as himself who walk with them.

The long-stated goal of the U.S. military is to enable Iraqi forces to take over.

The plan here calls for the 1-18 soldiers to slowly phase themselves out of work. But the people are scared, Rudy said. Those who want to cooperate with U.S. and Iraqi forces feel intimidated.

Taming a townRudy&#8217;s soldiers have been in business for six weeks.

They&#8217;ve rounded up about 45 people who will be going to jail for planning and/or executing violence against U.S. and Iraqi forces, as well as general bullying.

The soldiers have found caches of mortars, artillery shells, rocket-propelled grenades and other paraphernalia, including a car that was hollowed out for possible use as a car bomb.

The Predators have lost a soldier, Cpl. Eric Palacios, killed by a sniper.

One Humvee driver lost his leg to a roadside bomb; a Humvee was disabled by an armor-piercing round to the engine.

Now, though, is the first time soldiers have actually been based there.

In addition to the military mission, soldiers such as Company B 1st Sgt. Jerry Almario have simple desires.

The bigger picture calls for Ta&#8217;meem&#8217;s citizens to govern themselves and walk their streets with peace of mind while blue-shirted Iraqi policemen uphold law and order.