From floods to fuel 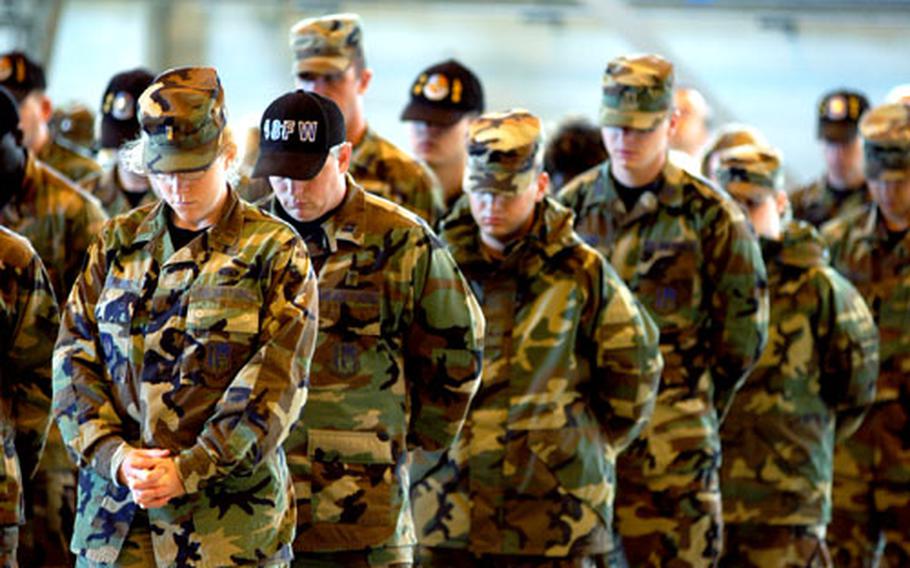 Mourners bow their heads for a prayer during a memorial ceremony for Airman 1st Class Jason D. Nathan, who died after a roadside bomb struck his vehicle in Iraq on June 23. (Sean Kimmons / S&S)

Mourners bow their heads for a prayer during a memorial ceremony for Airman 1st Class Jason D. Nathan, who died after a roadside bomb struck his vehicle in Iraq on June 23. (Sean Kimmons / S&S) 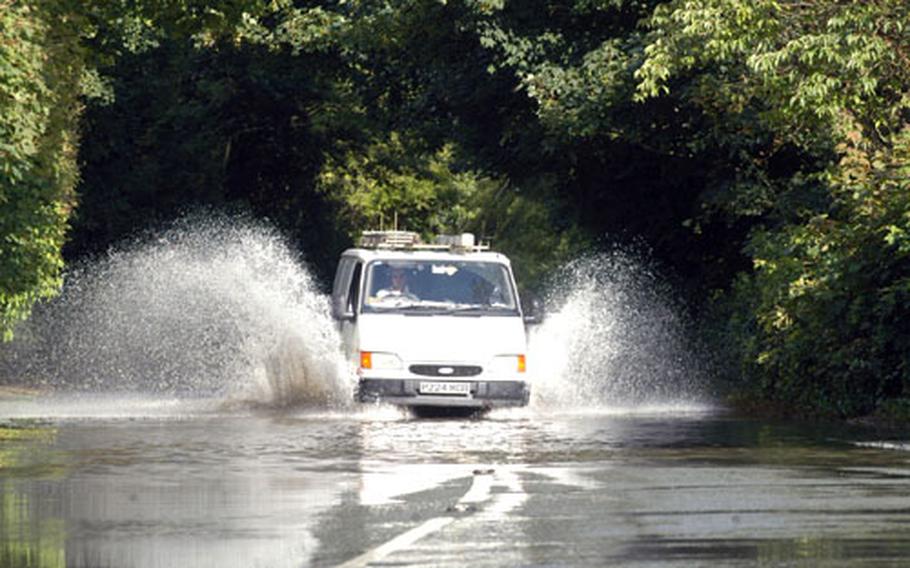 A van drives through a foot of standing water near the flooded town of Fairford. The town, just outside of RAF Fairford, enlisted the help of personnel from the airbase to divert water from the River Coln in order to save the town from more flood damage. (Sean Kimmons / S&S) 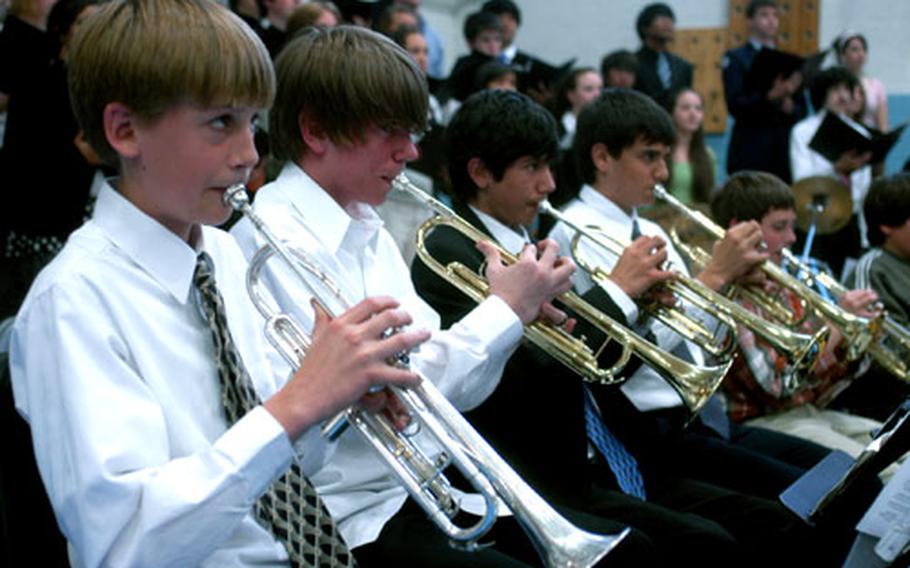 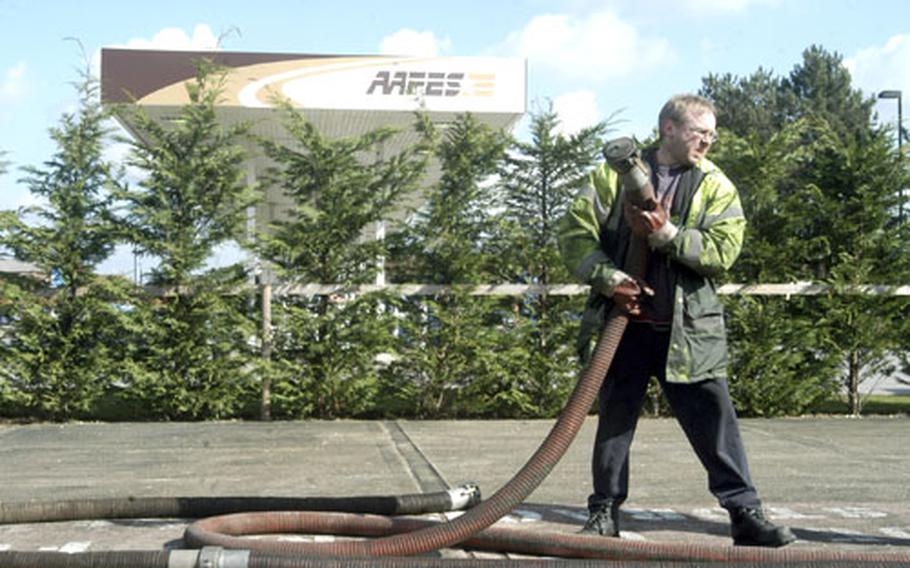 Cliff Kingham, from the Bob Terry Haulage Company, takes a hose back to his truck after pumping 32,500 liters of fuel from a storage tank at RAF Mildenhall&#39;s gas station after tests showed that the fuel was contaminated. (Sean Kimmons / S&S)

Only days remain before 2007 is etched into history.

It was an eventful year for airmen in the United Kingdom: Jet fighters scorched the skies of Afghanistan while scores of people lamented the closure of a unique high school.

Here are the top 10 stories in the United Kingdom during the past 12 months, according to Stars and Stripes&#8217; U.K. bureau staff.

Friendly-fire deaths in Afghanistan: The 492nd Fighter Squadron was in the midst of a historic and largely successful deployment to Bagram Airfield when tragedy struck: A 500-pound bomb dropped from an RAF Lakenheath-based F-15 jet fighter hit a column of British soldiers on Aug. 23.

Three troops from the Suffolk-based 1st Battalion, Royal Anglian Regiment died in the incident, which is still under investigation.

The investigation led to three separate groundings, the latest of which is still in effect for older-model F-15s. Scores of the jet fighters have been affected at RAF Lakenheath.

Hundreds gathered on base to honor the 22-year-old Macon, Ga., native who had gone to Iraq in place of an ill comrade.

London Central closes: With declining student numbers and a reduction of the U.S. military presence in the London area, it was all but inevitable that London Central High School, the only dormitory-based high school in the military&#8217;s global school system, would shutter as well.

The move forced dozens of American students into British schools, led to reassignments of Department of Defense Dependents Schools teachers and closed a unique chapter in the history of DODDS in the United Kingdom. Bobcats worldwide mourned.

RAF Lakenheath airman convicted of two rapes: Airman Basic Renato Sanchez del Carpio raped two 48th Fighter Wing airmen in the span of 12 months, and didn&#8217;t spent a day in jail until a military jury convicted him of both rapes late this year.

Now he has 18 years behind bars to reflect on his tour in England.

The unit also was instrumental in the early phase of the invasion of Afghanistan. The Pave Low is being replaced by the CV-22 Osprey, a controversial aircraft capable of vertical lift and fixed-wing flight.

Where are the Afghan stowaways?: RAF Lakenheath security officials captured eight Afghan youths stowed away in the rear compartment of a commissary-bound bread truck on March 8 and quickly handed them to the British government, which since has refused to release any information on the status or whereabouts of the Afghans.

The Home Office last month declined a Stars and Stripes Freedom of Information Act request for info on the Afghans, citing privacy protection.

Dodgy petrol stalls motorists across England: Thousands of drivers across the east of England &#8212; including roughly 75 American military personnel who filled up at polluted pumps on RAFs Lakenheath, Mildenhall and Alconbury &#8212; were struck by the so-called &#8220;dodgy petrol.&#8221;

The Army and Air Force Exchange Service negotiated a prompt settlement with the British energy firm that supplied the tainted fuel, and the affected motorists were soon back on the left side of the road.

Few carpets survived, but the rains did net the Air Force some positive publicity. The mayor of the Gloucestershire hamlet praised airmen who built a makeshift dam to divert the raging River Coln away from the town center.

British contractors have been charged with causing the pollution.