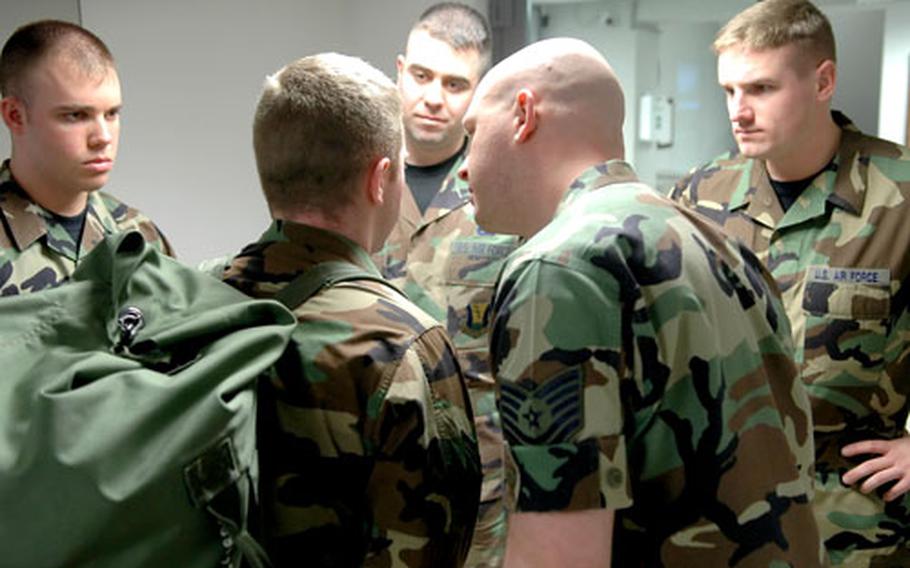 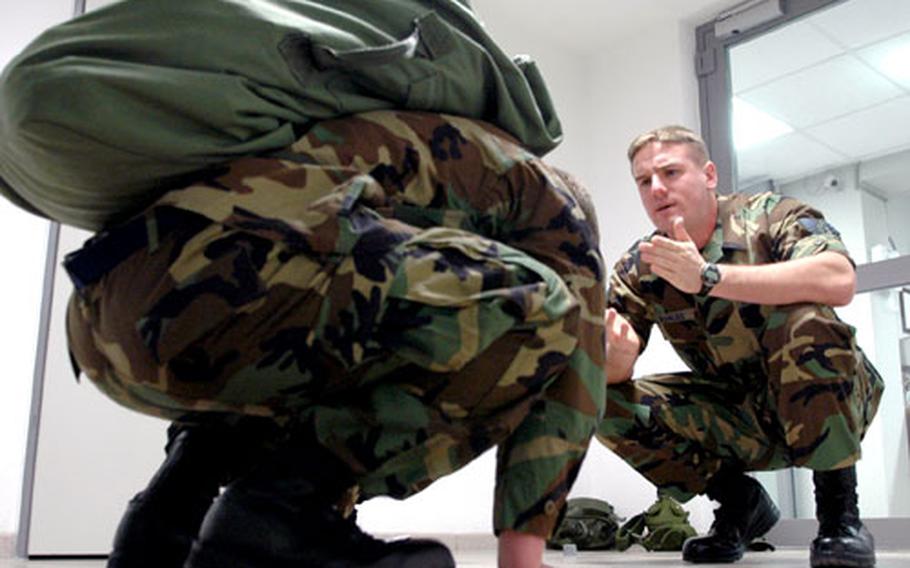 A candidate in R.A.M.P. assumes the “thinking position” as Staff Sgt. Mike Bowles asks him a series of questions. In the thinking position, candidates are required to stand in a 4-foot square box with feet and palms flat on the floor. (Raymond T. Conway / S&S) 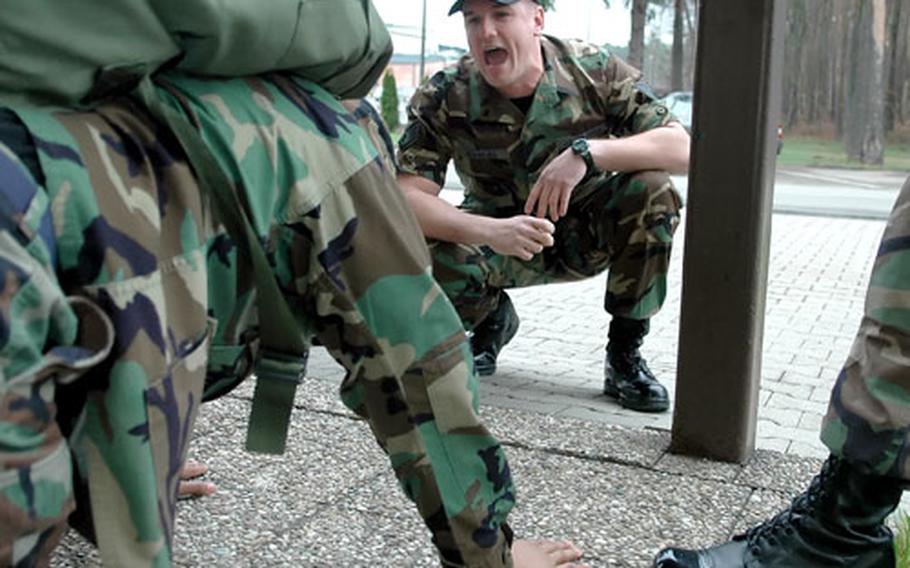 Upon arrival to the Ramstein Area Motivational Program, candidates are grilled by staff members before even entering the building and made to do push-ups. Airmen sent to RAMP lose their official rank titles and are referred to as "candidates" until they successfully complete the program. (Raymond T. Conway / S&S) 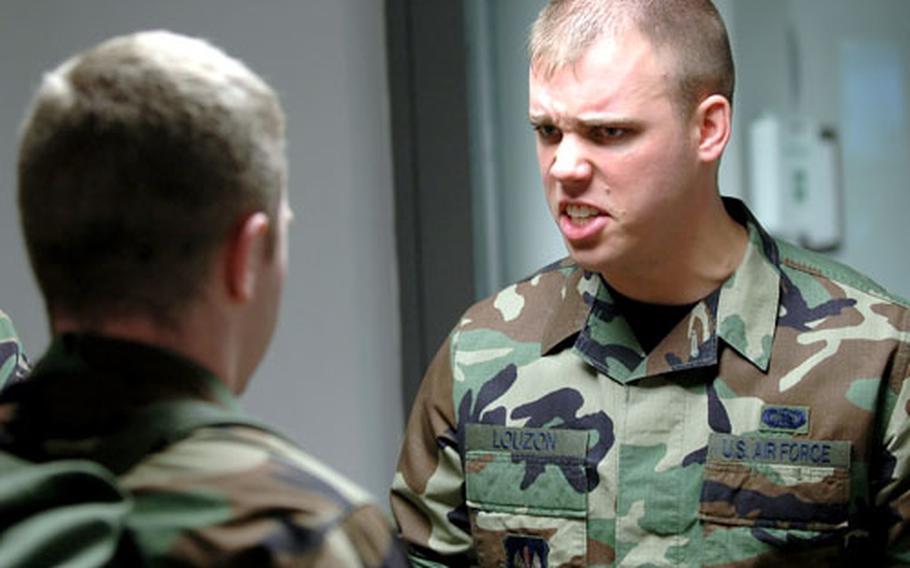 RAMSTEIN AIR BASE, Germany &#8212; Two airmen with duffle bags hanging from their shoulders look straight ahead like a pair of animatronic robots.

Tech. Sgt. Jeffrey Urbanski swaggers over to them, peers into their eyes and breaks the morning&#8217;s silence with his raspy voice.

For airmen one wrong step away from a military discharge, Urbanski is an intimidating savior. While the tattooed Urbanski used to repair planes, his job now is to fix airmen.

He serves as the chief of the Ramstein Area Motivational Program, or R.A.M.P., and leads a handful of sergeants whose mission is to make troublemaking airmen into productive, rule-abiding troops in 30 days or less.

Ramstein is one of only five bases worldwide that has such a program to rehabilitate airmen who commit offenses that usually don&#8217;t end up in court. About five airmen go through the program every week, but the numbers continue to rise. Most of the airmen have been in the Air Force for only three years and have committed such offenses as assault, theft or drunken driving.

Air Force bases across Europe send airmen on the brink of getting booted from the service to the program in hopes of turning them around.

It seems to be working.

Four out of five airmen sent to the program stay in the Air Force for 12 months and do not get in trouble, according to instructors. Not only does the program save airmen&#8217;s careers, it also saves the Air Force money. It costs thousands of dollars to train and equip a troop.

Although the concept is not new, the course is becoming more popular among commands and more bases are looking at starting similar programs. Ramstein&#8217;s course began about a year ago and is based on the Air Force&#8217;s correctional custody program, which has traditionally been heavy on hard physical labor as punishment.

Correctional custody has come and gone at many Air Force bases around the world. But Urbanski sees programs similar to Ramstein&#8217;s growing in importance because it focuses more on rehabilitation and is more effective. Plus, he said senior enlisted personnel don&#8217;t have time to put underachieving airmen on the right track.

Staff Sgt. Joseph Gallina Jr., who is one of the instructors, said the program works because airmen get individual attention. About five dozen airmen went through the program last year.

First sergeants have the option of putting an airman in R.A.M.P. from one to 30 days.

The first day is much like the first day of boot camp. Airmen are stripped of their ranks and are referred to as &#8220;candidates.&#8221; They must ask permission to speak, walk or move. Those that don&#8217;t are chewed out and must do push-ups.

While one of the purposes of the program is to punish airmen, there also is a heavy dose of academics. Candidates must memorize a quote each day and recite it. They also must write essays.

The aim is to show them the benefits of returning to the Air Force and what they would lose if they continued to get into trouble.

Senior Airman John Cottle, 22, had to go through the program after missing a couple of dental appointments and showing up late to work. The Texan, who is married with two young boys, spent 15 days in the program. Five days into the program he showed signs of a changed man.

Watching airmen turn their careers around is why Gallina and Urbanski enjoy their jobs so much.