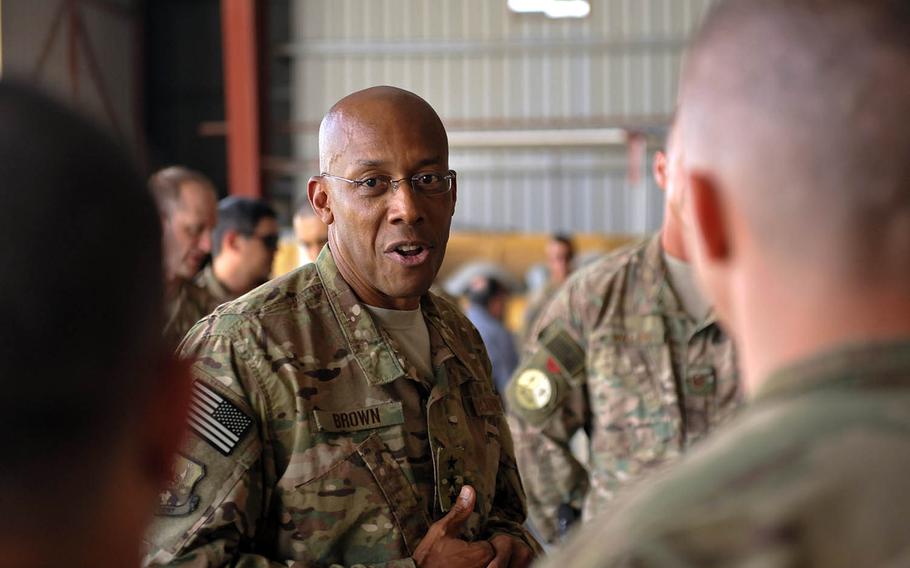 But Brown sounded more like a wide-eyed teenager than a battle-tested fighter pilot and leader during a ceremony at Joint Base Pearl Harbor-Hickam, Hawaii, where he assumed command shortly after being pinned with that fourth star.

&#8220;It is totally awesome to be here today,&#8221; he said to a large audience gathered under a cavernous hangar.

Recalling his first oath of office while an ROTC cadet, he said, &#8220;I never really believed I&#8217;d get this far. Never in my wildest dreams did I imagine that I&#8217;d be standing here on the platform today, wearing a fourth star and taking command of PACAF.&#8221;

Brown was commissioned in 1984 and received a master&#8217;s degree in aeronautical science in 1994. He has commanded a fighter squadron, the U.S. Air Force Weapons School and two fighter wings, including the 8th Fighter Wing, dubbed the &#8220;Wolf Pack,&#8221; at Kunsan Air Base, South Korea.

Brown commanded U.S. air forces in Southwest Asia from 2015 to 2016 and for the past two years has been deputy commander of U.S. Central Command. In those roles, Wilson said, Brown &#8220;was the architect of the air war that decimated the Islamic State&#8221; in Iraq.

Brown now commands about 46,000 airmen and civilian personnel based primarily in Hawaii, Alaska, Japan, Guam and South Korea. Roughly 320 fighter and attack aircraft are assigned to Pacific Air Forces, with another 100 aircraft rotating on deployments to Guam.

Adm. Philip Davidson, who took the helm of U.S. Indo-Pacific Command in May, described some of the challenges facing Brown and his airmen.

&#8220;China continues to improve both the size and the capability of its armed forces and hopes to supplant the U.S. as the security partner of choice, not just in the Indo-Pacific, but across the globe &#8211; and on its terms,&#8221; Davidson said. &#8220;Russia continues to modernize its military in all domains and seeks explicitly to undermine the international order and U.S. security guarantees. North Korea remains our most immediate challenge.&#8221;

He said America&#8217;s Pacific &#8220;joint forces must find new ways to compete below the threshold of armed conflict&#8221; to dissuade revanchist powers such as China and Russia from &#8220;solving their disappointments through conflict.&#8221;