From Dooley to Jones, bases in Germany feed US soccer team's multicultural success 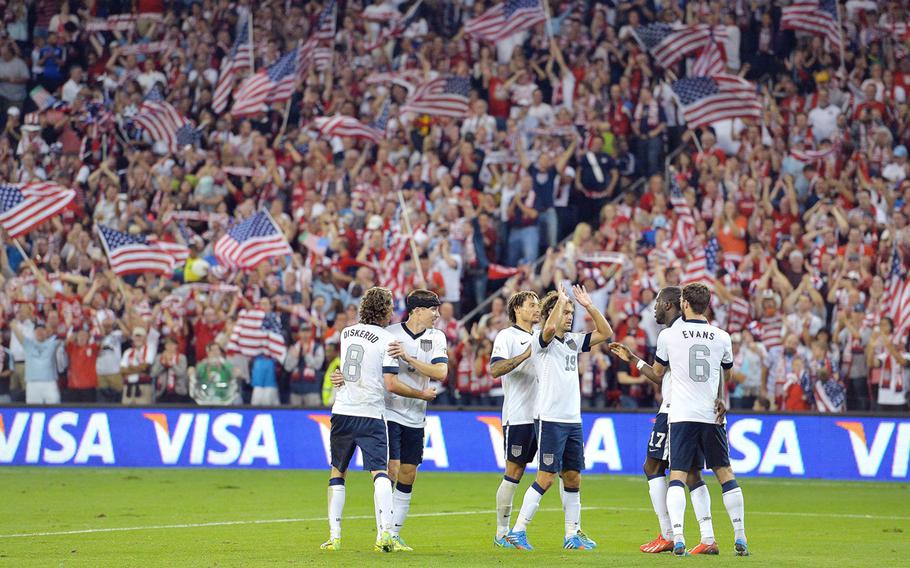 USA players congratulate each other after scoring a second goal against Jamaica in the second half of a World Cup qualifying match at Sporting Park in Kansas City, Kansas, Oct. 11, 2013. The USA defeated Jamaica, 2-0. (John Sleezer/Kansas City Star/MCT)

USA players congratulate each other after scoring a second goal against Jamaica in the second half of a World Cup qualifying match at Sporting Park in Kansas City, Kansas, Oct. 11, 2013. The USA defeated Jamaica, 2-0. (John Sleezer/Kansas City Star/MCT) Despite never knowing his American servicemember father who left Ramstein Air Base when he was 1 year old, and even though he couldn’t speak English, Thomas Dooley says he “jumped out of bed” at the chance to play for the U.S. Mens National Team in the World Cup. Here, Dooley competes in a match against Scotland on May 30, 1998, in Washington, D.C. (MRT) 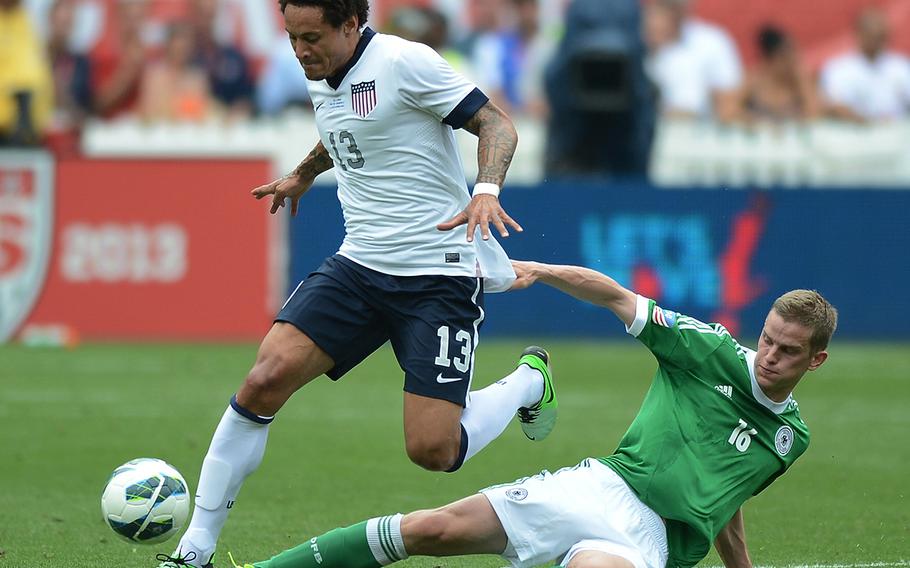 Jermaine Jones (13) has been one of several German-American players with paternal ties to the U.S. military who have contributed to the USMNT’s recent success. Here he plays a friendly at RFK Stadium in Washington, D.C., on June 2, 2013. (Chuck Myers/MCT) U.S. coach Jurgen Klinsmann says dual-citizenship recruitment is "all part of globalization. American families are spread out through business and the military, but they are still Americans.” (Scott Strazzante/Chicago Tribune)

Moments after Jermaine Jones scored his first goal for the U.S. Men’s National Team, even before his new teammates engulfed him in celebration, the German-American soccer player ran to the sideline, stood straight with chest puffed out in pride and gave his best military-style salute.

It was an effort to acknowledge American servicemembers across the globe, especially his father, who met his mother while stationed in Frankfurt more than 30 years ago.

“It was more like a compliment, a salutation to my father who was a soldier,” Jones said via email. “But then I wanted to show my humble respect for all the soldiers around the world who are fighting for a better Earth every day — especially the U.S. soldiers.”

Since that dramatic goal in 2011, Jones has been one of several German-American players with paternal ties to the U.S. military who have contributed to the USMNT’s recent success, including qualifying for its seventh consecutive FIFA World Cup.

The connection between Germany and American soccer took another dramatic turn when the 2014 World Cup draw was announced this month: The U.S. was placed in the same group with Germany for the first round.

During the 2014 World Cup qualification cycle, five such players represented the U.S., combining to play in 15 of the 16 games. Four played in a September 2012 qualifier against Jamaica.

Some of their background stories include a phone call from U.S. head coach Jürgen Klinsmann, one of the best strikers in German soccer history.

“We are trying to be proactive,” Klinsmann said of dual-citizenship recruitment in a 2012 interview with the Miami Herald. “It’s all part of globalization. American families are spread out through business and the military, but they are still Americans.”

The U.S. globalization of soccer was not as common at the time of the 1994 World Cup, when Klinsmann was still scoring goals for Germany, and by some form of luck, a German-American named Thomas Dooley ended up helping the American host team advance past pool play.

Before the 1994 Cup, Dooley was an established player in the Bundesliga — Germany’s top pro division — for Football Club Kaiserslautern, but missed out on chances to play for the German senior national team due to ankle injuries, he said.

Despite never knowing his American servicemember father who left Ramstein Air Base when he was a 1-year-old, and even though he couldn’t speak English, Dooley says he “jumped out of bed” at the chance to play for the USMNT in the World Cup.

“It was something like winning the lottery,” said Dooley, who admits he had “never thought about the U.S. at all” as an option for international soccer.

“If I would have played one minute in one of those (Germany) games, then I couldn’t have played for another country,” said Dooley, who started every World Cup game for the U.S. in 1994 and ‘98.

Dooley has been followed by players like 22-year-old Terrence Boyd, who was born while his father served in the Gulf War.

Boyd’s parents met near the Army base in Garlstedt, Germany, but split not long after moving to Queens, N.Y. At the suggestion of former U.S. soccer coach Thomas Rongen, Boyd used social media to track down his American family and ultimately get U.S. citizenship.

“I actually got my passport and was able to play for the States because of Facebook,” Boyd said recently after practice for his Austrian club team.

Jones actually did play three times for Germany, but the games were categorized as “friendlies” and did not keep him from having his one-time switch approved by FIFA. He has become a fixture of Klinsmann’s lineups, playing in 12 of 16 World Cup qualifiers, mostly as a roving defensive midfielder that allows him freedom to get forward as well.

With more than a decade of European soccer experience, including elite tournaments like the Champions League, Jones will very likely make the USMNT roster for Brazil.

“Every coach has their guys, and Jermaine Jones is a Jürgen Klinsmann guy,” explained ESPNFC.com senior writer Jeffrey Carlisle, who will be reporting from his third World Cup next year.

“Klinsmann really relies on him for leadership and presence — physical presence on the field,” he said.

There are other established players as well, like Fabian Johnson from Munich and Danny Williams from Karlsruhe, not to mention another tier of young players who are waiting for a chance to break in with the USMNT or being actively recruited to do so.

Most, if not all, of the German soccer players play in the Bundesliga and are the sons of African-American servicemembers, the latter a topic touched on by Williams in an interview last year for the CNN series “Black in America.”

“When people are looking at me in Germany, they know that I’m not 100 percent German,” Williams said. “I told my parents, ‘Listen, I feel more American than German.’”

Over the years, Jones has frequently commented that he feels both sides of his heritage. His name and looks are American, he told Fox Sports earlier this year, but his precision and punctuality say Deutsch. Throw in his thoroughly tattooed frame and former Miss Germany wife, and Jones is one of the best-known Afro-Germans.

Adding these Afro-German players to the U.S. group of eligible athletes isn’t the only reason American soccer is improving, but they add structured German training that is partly cultural DNA.

“Kids who are 18 years old in Germany, they have like thousands of hours more on the soccer field than the American players,” Dooley explained.

“In Germany, football is part of the culture,” Jones added. “The people here have been crazy about it for a much longer time.”

U.S. coaches have said it’s just coincidence that the current squad is coached by a German and several German-reared soccer players with dual-nationality have been recruited.

“[Klinsmann] doesn’t have any strong feelings toward Germany versus Holland or Norway, Sweden or wherever it might be,” Rongen, the former USMNT youth coach, told The New York Times in 2011.

Jones agrees: “Of course, there have been some German-Americans like me, but in general, the U.S. soccer team is multicultural,” as are teams from a number of other countries.

The American team also includes a Haitian-American, an Icelandic-American and a Norwegian-American.

“The most important thing is that the best players are on the team,” Jones said. “Their origin should be irrelevant.”

During USMNT practices, Boyd said when it’s just the German players, that’s what they speak, but as a larger group, it’s always English.

“The national team itself is a whole diverse group of guys playing,” Boyd said.

Despite cutbacks, Germany still has at least 20 U.S. military installations and 45,000 servicemembers, a potential soccer pipeline much larger than all the other European countries combined.

Asked who he thinks of when he hears “dual-nationality” and “USMNT,” ESPN writer Carlisle said he recalls the 1990s era of Dooley and his Dutch-American teammate, Earnie Stewart.

“Both of those guys had long and successful careers with the USMNT. They helped move the program along with their professionalism and their experience that they were able to pass along,” he said.