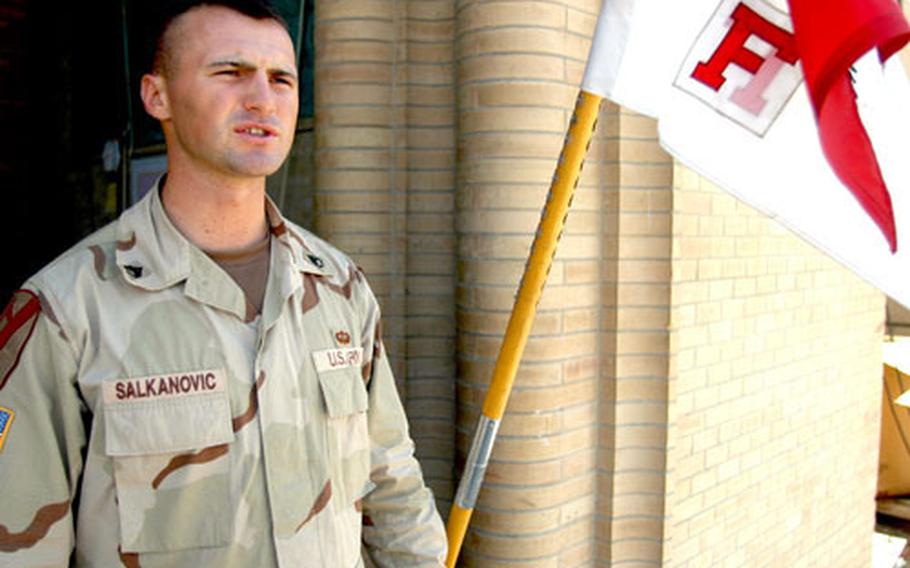 His clear, deliberate speech, close-cropped hair and serious demeanor give him an air of authority usually reserved for those with a lifetime of military experience, not five years of U.S. Army service.

Those five years don&#8217;t tell the whole story, though.

When he was only 14, Salkanovic spent a year in the Bosnian army, fighting Serbian forces that surrounded his hometown of Sarajevo for 3&#189; years between 1992 and 1995.

Finally, the army relented and Salkanovic became a soldier, first proving himself by working with radios or carrying ammunition. After a few months he moved to the front lines, which were less than 1&#189; miles from his home.

After about a year of fighting, Salkanovic&#8217;s father was wounded in battle.

Salkanovic was the middle of three children and the oldest son, so it fell on him to provide for the family. He ran the household for two years until the family emigrated to the United States in 1995 to get medical help for his sister, who had a severe case of scoliosis.

&#8220;I was lost for three months,&#8221; he said. Neither he nor his siblings spoke English. &#8220;I would guess what they were saying from one or two words and piece it together. After three months we all kind of felt comfortable speaking English.&#8221;

Once his sister&#8217;s two surgeries were complete, Salkanovic&#8217;s family decided to move back to Sarajevo, then part of Bosnia and Herzegovina, in 1997.

He said the Army gave him no special consideration for his time as a child soldier. He still had to go through basic training.

And he found the U.S. Army quite different from the Bosnian army.

In 2001, he was assigned to 3rd Battalion, 8th Cavalry, deploying twice to Kuwait right before and right after Sept. 11, 2001. When Troop F was created, Salkanovic joined the unit, which is now deployed to Camp Grey Wolf in the International Zone.

Salkanovic&#8217;s history as a child soldier followed him into the unit, but he doesn&#8217;t tell many war stories.

Carter said that Salkanovic doesn&#8217;t tell stories about combat, but shares his past combat experience in other ways.

Carter said that Salkanovic&#8217;s squad has seen some serious combat in its nearly six months in Iraq.

Shortly after its arrival, the squad fought through a 4&#189;-mile long coordinated ambush in Abu Ghraib and manned the Baghdad International Airport perimeter when it came under attack, later clearing the buildings that had housed the enemy fighters.

&#8220;Anyone who fought in a war at 14 will be more mature than your average young sergeant,&#8221; Carter said. &#8220;We got a lot of young NCOs who came as specialists or young sergeants and grew into real good staff sergeants and will be the future of the NCO corps.&#8221;

Salkanovic said he hopes to make the U.S. Army a career.