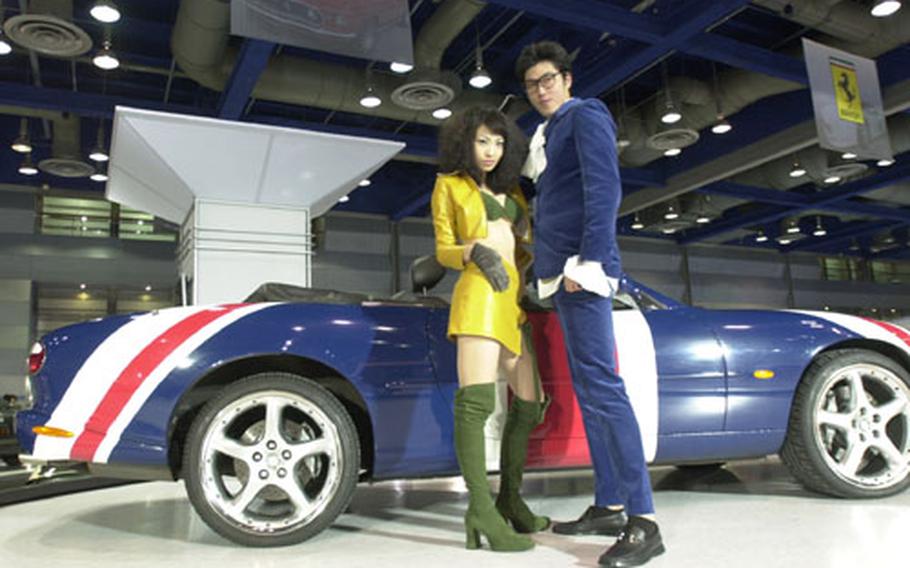 Models stand near Austin Powers&#39; famed "Shaguar." The sportster is one of 53 cars on display at the Hollywood Motor Show at the COEX convention center in Seoul, a cool showcase of famous cars that runs through Sunday. (Jeremy Kirk / S&S)

SEOUL &#8212; The Hollywood Motor Show is the vicarious motorists&#8217; dream &#8212; passion and thrills on wheels seen only before on-screen.

Waxed and polished, chromed and detailed, 53 super-cars from some popular movies and television shows from the 1960s through the present are on display through Sunday night at COEX, the convention center on the west side of the city.

The cars are on display in the convention center&#8217;s Indian Ocean Center near the Hakyolul stop on subway line No. 3 from 9 a.m. to 7 p.m. through Sunday.

The show was organized by Vault Entertainment Co. Ltd.

It&#8217;s the first time a movie theme has been paired with a motor show here, director Martin Ryoo said. The company contacted individual owners of the cars and persuaded them to rent the cars out for the show.

The cars were shipped in individual containers from their homes in United States, England and Japan, then carefully rolled out at the convention center, he said. They are all insured to the hilt, roped off and off-limits except to the caresses of posing models.

Wednesday, Kwon Nae-hyun was chilling in a tuxedo by the sporty green Jaguar XKR, the roaring coupe that blasted away at an Aston Martin driven by Pierce Brosnan in &#8220;Die Another Day.&#8221;

The Seoul National University student &#8212; who recently completed a two-year military service assigned to the Joint Security Battalion with U.S. soldiers &#8212; said he just auditioned for the job of the Korean James Bond.

But the long hours are tough.

And when he gets off work around 7 p.m., the ruse is up: He changes out of the tux and drives a small motorcycle home.

Ryoo hopes the show will catch on and tour the world.

Here, most of the explanations of the cars&#8217; movie roles are in Korean, but with movie screens showing clips, you&#8217;ll still be in the drivers seat.