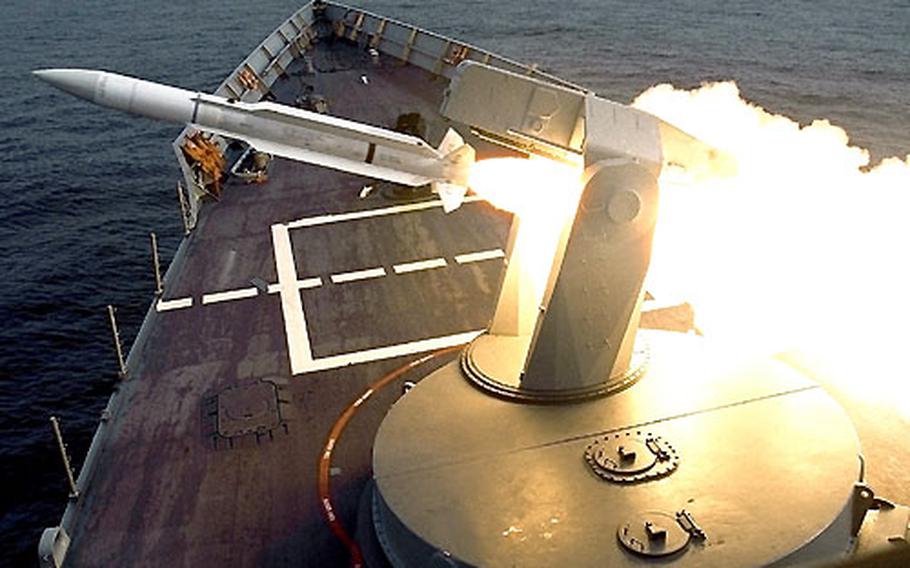 A standard SM-1 surface-to-air missile is launched from the forward missile rail of the frigate USS George Philip during a 2002 training exercise off the California coast. (Kenneth Pace / Courtesy of U.S. Navy)

A standard SM-1 surface-to-air missile is launched from the forward missile rail of the frigate USS George Philip during a 2002 training exercise off the California coast. (Kenneth Pace / Courtesy of U.S. Navy) 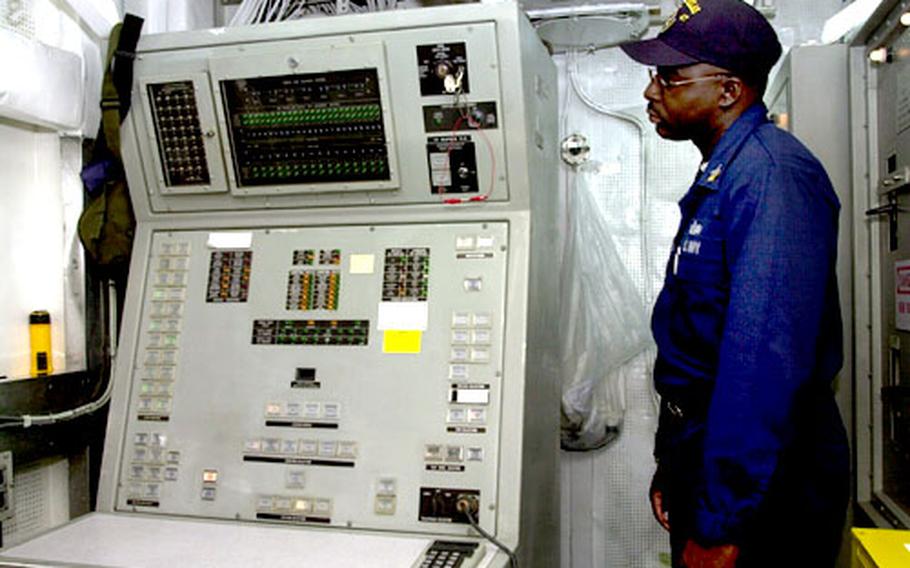 Petty Officer 1st Class Julian Maxwell, leading petty officer for the combat and guns division aboard the guided-missile frigate USS Nicholas, looks at the controls that launch the SM-1. The Navy is removing guided-missile launchers from all frigates by 2010. (Scott Schonauer / S&S)

ABOARD THE USS NICHOLAS, Mediterranean Sea &#8212; When this ship left its homeport of Norfolk, Va., earlier this year, it departed with the same guided missiles that have been used aboard Navy ships for more than 30 years.

Beginning this year, frigates are ditching the outdated Mark 13 missile launcher &#8212; affectionately known among sailors as the &#8220;one-armed bandit.&#8221;

Cmdr. Chan Swallow, Nicholas commander, likes having the launcher on board his ship but said it is time to make room for newer systems.

The Navy is removing Standard Missile-1s from the fleet&#8217;s 30 Oliver Hazard Perry-class frigates in the next seven years. The move is part of a frigate modernization program and is a cost-saving measure to help the Navy buy more ships and improved weapon systems.

While removing the missile launcher takes away a defensive capability, the durable and sturdy frigate today is more likely to be attacked by terrorists in a small, bomb-laden boat or a slow-moving airplane than by another military ship.

&#8220;We&#8217;re taking a small risk here,&#8221; Swallow said of removing the launchers. &#8220;We are removing a capability against some things. But the long-term perspective is that now is the time to take that risk. We don&#8217;t feel that there is a nation right now that wants to attack the United States. There are terrorists that want to attack us, but the threats that they&#8217;re going to attack us with are not things that you would use a standard missile against.&#8221;

The cost of maintaining the missile launcher also is a reason why the Navy has decided to get rid of it.

Taking the launcher off frigates is a major change. The modernization program is one of the largest for the fleet of frigates.

One of the missions of the guided-missile frigates has been to provide air defense for carrier strike groups. But since carrier groups already have a robust air defense system, the frigate&#8217;s mission will focus on anti-submarine warfare, merchant convoy escorts, counterdrug missions and maritime interception operation.

The Navy began removing the launchers from the first frigates in October. By 2010, all the launchers will be cut, leaving the below-deck equipment intact. The magazine and loading unit will eventually be replaced by a new weapon system, the SeaRAM.

The Mark 13 launcher is located toward the bow of the ship and is the frigate&#8217;s most intimidating defense system.

Missiles from below-deck magazine pop up one by one into the launcher with the push of the button from either a weapons operator or by the commander on the bridge. The swiveling launch pad can aim the missile in nearly any direction, from just over the horizon or straight into the sky. A typical frigate can carry about three dozen Harpoon and SM-1 missiles.

The Nicholas is one of the last frigates to leave on a deployment with its missiles and launcher. When it returns to Norfolk, it will receive its overhaul. The amount of time it will take to overhaul a frigate like the Nicholas varies.

Just as pilots get misty eyed when the Navy retires a fighter jet, some weapons operators hate to see the launchers go.

Petty Officer 1st Class Julian Maxwell, leading petty officer for the combat and guns division aboard the Nicholas, has worked with the SM-1 missile for five years.

The removal doesn&#8217;t mean sailors like Maxwell will be out of a job in the near future. Sailors trained on how to launch the missile will focus on the other defense systems, including the ship&#8217;s guns.

The Navy plans to spend $165 million &#8212; or $5.5 million per frigate &#8212; to make hull, mechanical and electrical improvements to frigates, from adding new diesel engines to implementing new defense systems.

&#182; Upgrading the Phalanx Close-In Weapons Systems with a more advanced version. The system is often nicknamed R2D2 because it resembles the robot character on the movie Stars Wars.

Technically, the ships can still carry the title. Each frigate has two SH-60 helicopters, which can be armed with guided missiles.

&#182; Used against missiles, aircraft and ships, it first came into the fleet more than a decade ago.

&#182; Replaced Terrier and Tartar missiles and is part of the weapons suit of more than 100 Navy ships.