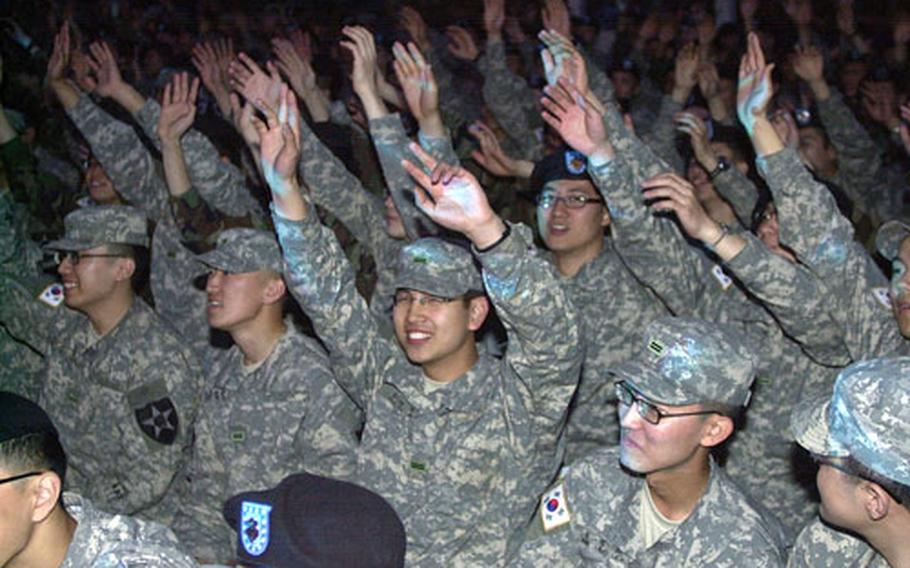 South Korean soldiers sway to the live music at a U.S./KATUSA friendship week concert at the Schoonover Bowl on Camp Casey Thursday night. The concert served to kick-off a Friendship Week that begins Monday in the camps north of Seoul. (Erik Slavin / S&S)

SEOUL &#8212; The U.S. and South Korean soldiers who work together daily spent the last week learning more about each other.

The annual KATUSA-U.S. Soldier Friendship Week was held in the Daegu and Seoul military communities. Similar events are planned this week at Camp Humphreys and at the U.S. Army bases north of Seoul.

In Seoul, the week seemed to start slow with groups of U.S. soldiers congregating with fellow U.S. soldiers while the South Korean Augmentees to the U.S. Army mostly talked among themselves.

Sporting events during the week included flag football, soccer, tug of war and &#8220;ssireum,&#8221; a traditional Korea form of wrestling.

Each team was required to field a minimum number of KATUSAs, U.S. male and U.S. female soldiers.